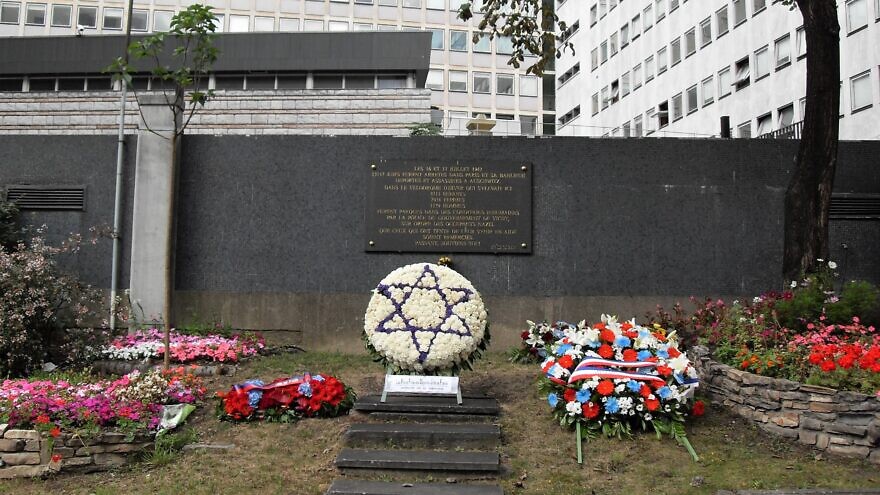 Memorial garden at the former site of the Vélodrome d’Hiver (Vel’ d’Hiv), the Winter Stadium, in Paris, where 13,000 Jews were rounded up and forced to stay during July 16-17, 1943. Credit: Djampa via Wikimedia Commons.
Spread the word.
Help JNS grow!
Share now:

(July 18, 2022 / JNS) French President Emmanuel Macron discussed the dangers of anti-Semitism as part of an 80th commemoration ceremony of a mass arrest and roundup of Jews in Paris that took place during the years of World War II and the Holocaust.

He spoke on Sunday in the central town of Pithiviers, south of Paris, at the inauguration event for a memorial at its train station marking the Vélodrome d’Hiver (Vel’ d’Hiv) roundup, reported Reuters.

For two days in 1942—July 16 and July 17—thousands of French policemen helped round up 13,000 Jews and imprison them inside the Vel’ d’Hiv (the Winter Stadium) in Paris. Families were left to sit in the heat of the sports arena without food, water, bathroom facilities or access to medical care. The situation was depicted in the 2010 French drama film, “Sarah’s Key.”

The crowd was then dispersed and sent to transit camps, and later, to concentration camps—namely, Auschwitz. It was the largest mass detention of Jews by French police during the Holocaust. German authorities continued the deportations of Jews from French soil until August 1944.

“We have not finished with anti-Semitism, it is still there—stronger and more rampant,” said Macron.

The president also warned against a “new type of revisionism,” recognizing France’s active role in targeting Jews during Holocaust, according to Reuters. He stated that “we need to recognize everything in order not to reproduce it.”

Yonathan Arfi, president of the Representative Council of Jewish Institutions in France, or Crif, also spoke at the event about the presence of anti-Semitism in France. He noted that it takes on many forms, saying, “Sometimes, Islamist, conspiratorial, anti-Zionist, far-right, far-left … , anti-Semitism multiplies its faces and its false pretenses. In an attempt to deceive our vigilance, he constantly adorns himself with the clothes of our time.”

He called for more education about anti-Semitism in schools and additional action to combat Jew-hatred at all levels of society.

“Fighting against anti-Semitism requires the mobilization of all public power: the police forces, of course, in the front line against the security threat but also the magistrates who hold the keys to restoring the deterrent force of the rule of law in the face of acts against the Jews,” said Arfi. “Anti-Semitic character should never be overlooked. The fight against anti-Semitism and against all forces of hatred must be everyone’s business.”