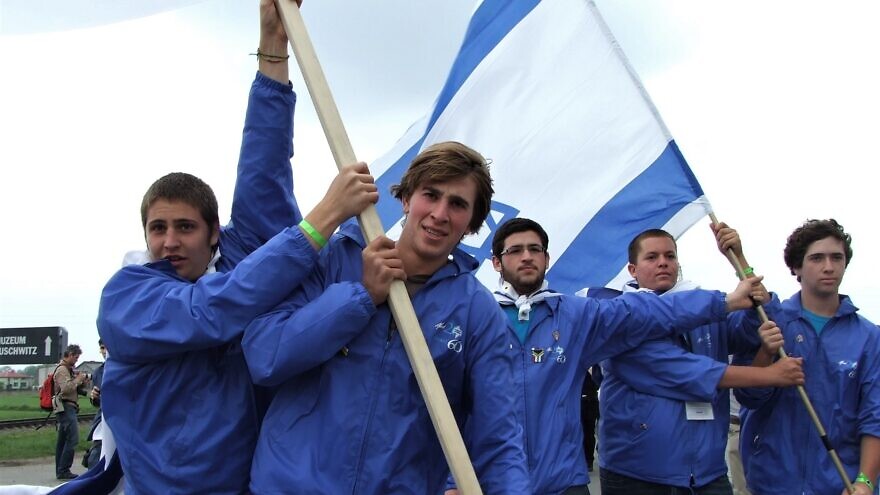 March of the Living in Poland, May 1, 2008. Credit: Necronx via Wikimedia Commons.
Spread the word.
Help JNS grow!
Share now:

(April 6, 2022 / JNS) The International March of the Living will resume in person for the first time in two years but with a reduced capacity, due to Russia’s ongoing invasion of Ukraine, and only eight Holocaust survivors participating.

Organizers made the announcement last week in the United Kingdom House of Lords.

The procession along the path leading from the Auschwitz to Birkenau concentration camps in Poland will take place starting on April 24, a few days before Israel’s Holocaust Remembrance Day (Yom Hashoah), as a tribute to the 6 million Jewish victims of the Holocaust.

More than 2,000 Jewish and non-Jewish participants are expected to march this year, including dignitaries, community leaders and representatives of the third generation of Holocaust survivors, according to The Jerusalem Post.

“In the last few years, the International March of the Living and the world as a whole have lost many Holocaust survivors,” said March of the Living president Phyllis Greenberg Heideman and chairman Dr. Shmuel Rosenman. “This is almost the last opportunity to march alongside Holocaust survivors. It is our responsibility to carry the torch of their memory even in the face of the tragic ongoing war in Ukraine.”

The march will end with a ceremony at what remains of the Auschwitz-Birkenau crematorium.

Those planning to attend include former Israeli Chief Rabbi Yisrael Meir Lau, Israel Defense Forces Cantor Shai Abramson, Holocaust survivors and Israeli singer Harel Skaat. Torches of remembrance will also be lit in memory of those who died in the Holocaust.