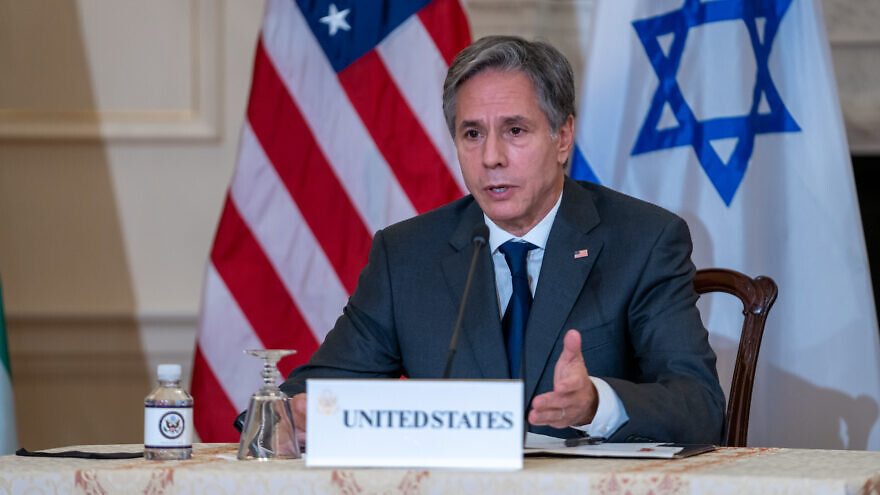 (October 14, 2022 / JNS) A bipartisan group of members of the U.S. House of Representatives sent a letter to U.S. Secretary of State Antony Blinken this week urging for an update on the investigations of internal incidents of anti-Semitism in the department.

The letter, which was signed by 75 members of Congress, reminded Blinken of the multiple acts of anti-Semitism that have occurred in the past 21 months within the State Department and its foreign posts, and despite the launching of an investigation of the incidents, there has been no news of progress or putative action.

The first incident referred to in the letter was brought to light in February 2021, when it was discovered that U.S. Foreign Service Officer Fritz Berggren was running an anti-Semitic website that had called for the establishment of a Christian nation-state for years.

Despite this revelation, Berggren is still employed with the department.

In July of the same year, a swastika was found cut into the wood paneling of one of the elevators of the Harry S. Truman Building in Washington D.C. The elevator was near the office of the special envoy for monitoring and combating Anti-Semitism.

That month more than 70 State Department employees sent a letter to Blinken expressing their concerns and feelings of insecurity over Berggren’s continued employment with the department.

“Despite these pleas from your employees, and his outrageous anti-Semitism and bigotry, Mr. Berggren remains employed by the State Department. This is beyond alarming,” the task force members wrote.

The elevator incident caused swift condemnation from Blinken, who is Jewish, and the opening of an investigation into the act. But nothing of the investigation has so far been publicly released more than a year later.

Yet another anti-Semitic incident occurred earlier year when a swastika was found painted on a window shade inside a secure area of the U.S. Embassy in Bulgaria.

“We appreciate the steps taken immediately by you and President Biden following these incidents to make clear that anti-Semitism has no place in the State Department, in the Biden Administration, or anywhere in the world,” the letter’s authors wrote. “However, more can and must be done to protect the Jewish community, and other religious minorities, at the State Department.”

Meng, who is the vice chair of the House Appropriations Subcommittee on State and Foreign Operations, was able to include language in the Fiscal Year 2023 House State and Foreign Operations report requiring the State Department to report to Congress on the status of the investigation into these incidents and include recommendations of how the department can improve such issues among its staff.

But the letter states that this issue is too urgent to wait for the appropriations process to finish and asked for immediate action.

“As a co-chair of the Bipartisan Task Force for Combating Anti-Semitism, I strongly condemn the various antisemitic incidents that occurred at the State Department’s headquarters,” Fitzpatrick said in a statement. “We must know what steps are being taken to address these occurrences to ensure that future acts of hatred do not happen again.”