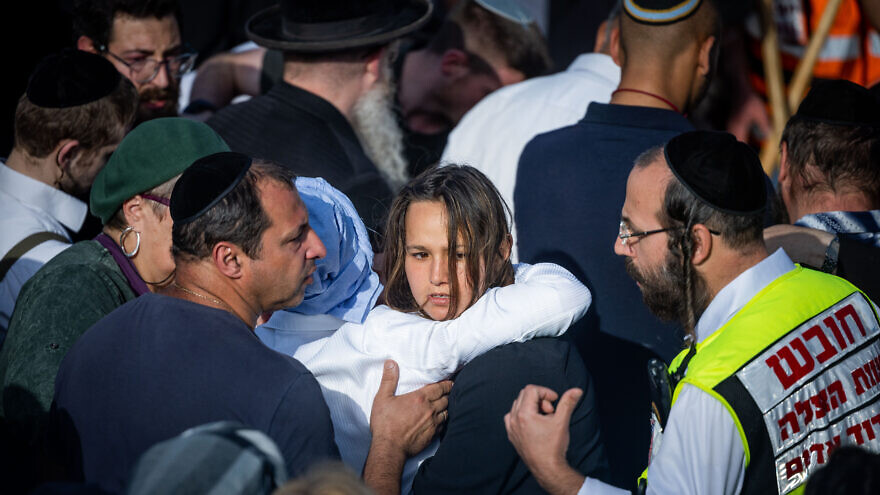 Victoria Fligelman at the funeral of her fiancée, Vyacheslav Golev, 23, who was shot dead by terrorists during his shift as a security guard outside Ariel on May 1, 2022. Photo by Yonatan Sindel/Flash90.
Spread the word.
Help JNS grow!
Share now:

(June 15, 2022 / JNS) Israel Defense Forces Military Prosecutors charged two Palestinians at the Samaria Military Court on Tuesday with the murder of an Israeli security guard in a terrorist shooting in Ariel, which occurred on April 29, according to a report by Walla.

The brother of one of the suspected terrorists was also charged for failing to prevent the attack and providing the assailants with a hiding place.

The suspects, named in previous Hebrew-media reports as Yahyah Marei and Yousef A’asi, were arrested by Israeli security forces in their homes in the town of Qarawat Bani Hassan, near Ariel, the Israel Defense Forces said in a statement on April 30.

Vyacheslav Golev, 23, of Beit Shemesh, had been stationed at the entrance to Ariel as a security guard, together with his fiancée, Victoria Fligelman of Ashkelon, whom he defended with his body during the shooting, saving her life.

Two Carlo-type improvised submachine guns were seized during the arrest of the suspects, said a statement by the military at the time.

According to the investigation, the two gunmen arrived at the entrance to Ariel in a blue Suzuki with Israeli license plates that belonged to another vehicle. The terrorists opened fire on the guards’ booth from their vehicle before one of them exited and fired at close range, killing Golev. Fligelman emerged from the attack unharmed.

Golev, who is survived by his parents and seven siblings, had only recently moved to Ariel together with Fligelman, according to Israeli media. The two became engaged just weeks before the attack.