(November 27, 2020 / JNS) In its new campaign, the Committee for Accuracy in Middle East Reporting and Analysis (CAMERA) celebrates Mizrahi Jews on college campuses around the world, encouraging students to host and plan a variety of events and speakers, and write articles for their newspapers that demonstrate the diversity of the Jewish world.

CAMERA fellows are also encouraged to share their families’ stories, which frequently include courageous escapes from violence and persecution, “to counter common canards that are fueled by ignorance, such as the ridiculous claim that some Israel advocates’ efforts to highlight the plight of Mizrahi Jewry denote “Mizrahi-washing.”

Michal Amar, 25, a CAMERA fellow at the Hebrew University in Jerusalem currently studying Middle Eastern studies and communication, comes from a traditional Moroccan and Iraqi home. Originally from Yavneh, Israel, she has been learning more about her heritage through her grandmother’s stories of living in Casablanca and of the good relations with their Muslim neighbors that existed prior to 1948. She is also concentrating on how the Mizrahi community might be the bridge to make peace with Israel’s neighbors due to their connection and common grounds with Arabs and Muslim countries.

Part of her grandfather’s family, she explained, prayed to come back to Jerusalem, and for the renewal of the Jewish temple and homeland, sending their son to take part in a Zionist camp at age 12, where he helped to build a kibbutz in pre-state Israel and later fought in Israel’s war of independence. He then returned to Morocco to marry Amar’s grandmother and helped the family make aliyah to Israel in 1956.

“They all escaped the police so they wouldn’t get caught, left their houses as is, and went on a ship that sailed for a week and nearly sank in the Mediterranean Sea,” Amar told JNS. “It was also a huge risk because the ship that left Gibraltar right before their ship [called Egoz] sank and many people died.”

On her Iraqi side, related Amar, her family spoke of the “Farhud” pogroms on the eve of the Shavuot holiday in 1941, which led them to flee Iraq for Israel.

Amar hopes to bring these stories, which she maintained are more well-known in Israeli society but less highlighted in an academic setting, compared to the stories of Palestinian Arabs.

“My entire life I was taught to be an Israeli”—and she is glad for it, she said—“but I never really engaged with my Mizrahi culture, which seems very relevant to nowadays atmosphere in the Middle East. Now, the stories of my ancestors give me an opportunity to get to know my roots and explore my identity as a Jewish, Mizrahi and Israeli woman,” she continued. 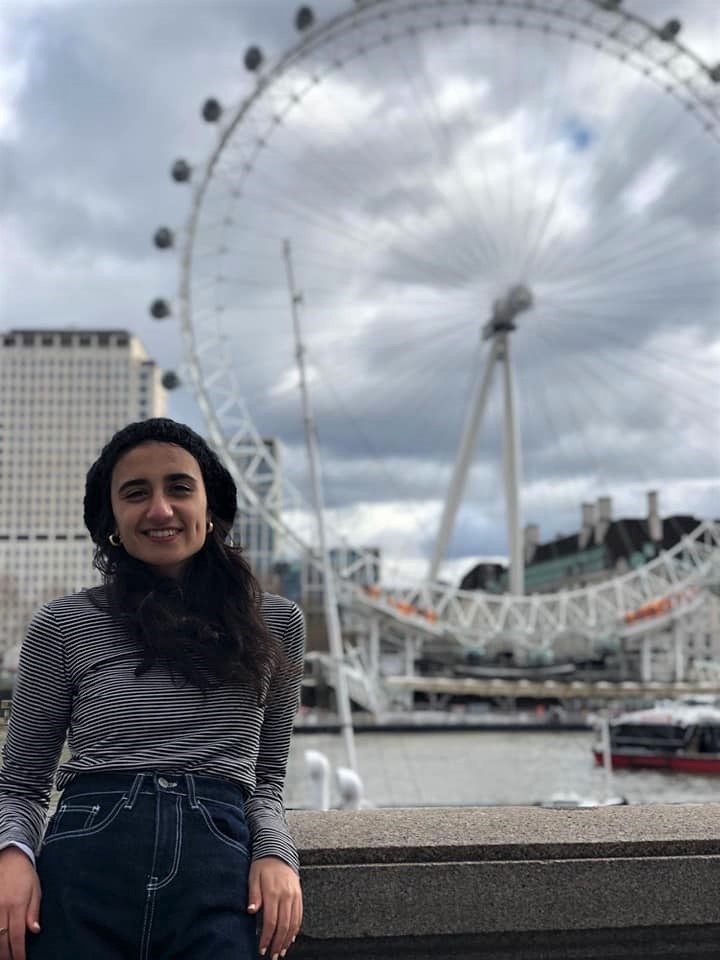 Michal Amar, a CAMERA fellow at the Hebrew University in Jerusalem. Credit: Courtesy.

In an article that she is writing as a part of her fellowship with CAMERA, Amar plans to highlight “the deep connection of the Mizrahi Jewish Community to Zionism, their participation in the establishment of Israel and why they still are Zionist despite the racism they experienced from the Ashkenazi hegemony in the early stages of Israel.”

“I think this is very important for Israelis to acknowledge the huge contribution of the Mizrahi Jewish community to the establishment of Israel because Zionism is mostly related with the Ashkenazi Jewish community up until this day,” she said.

“In addition, I think the story of Mizrahi Jews needs to be spoken in the world because there is a huge focus on Palestinian refugees who fled from Israel, while there is an absolute ignorance from the Mizrachi Jewish refugees from Muslim countries,” she explained. “Moreover, anti-Israel activists seem to take the racism towards Mizrahi Jews in the early stages of Israel, and magically apply to the entire Zionist movement. … To me, it is all about hypocrisy and twisting history in order to give the Palestinians the right for self-determination.”

Eden Abraham Bouskila, 19, is a CAMERA Fellow at UC Davis in California, where he studies economics. His parents are originally from Israel, with ancestry in Egypt and Morocco. He hopes to educate students at UC Davis that “Jews are not a monolith,” showing that there are many Jews of Middle Eastern heritage, “which emphasizes the idea of the Jewish Diaspora today by showing how Jews have scattered all over the globe.”

“I constantly hear untrue statements about the Jewish people in America,” he told JNS. “Many people here simply think Jewish people are people who subscribe to a belief system, when this is far from the truth. Not many people actually realize that Judaism is an ethno-religion, and our blood can generally be traced back to our roots.”

In reality, Bouskila continued, “Jews come in many shapes and colors, whether they look European, Middle Eastern, black, etc. This Mizrahi campaign can help people understand this concept of the diversity of Jews.”

To raise awareness of the diverse Mizrahi community and culture, other events include screenings of “The Forgotten Refugees,” with a speaker discussion and panels featuring Mizrahi students that give a platform for them to share their stories. CAMERA also hosted, in partnership with StandWithUs, Hillel at Baruch College, the Israeli-American Council and Jews Indigenous to the Middle East and North Africa (JIMENA), a Nov. 16 panel with Jews of Iraqi, Yemenite, Syrian, Turkish and Dagestani heritage.

Speakers include pro-Israel, Mizrahi and LGBTQ activist Hen Mazzig; Menashe Khamiov, who speaks about the history and culture of Bukharian Jews; Gibraltar-raised Jerusalem Deputy Mayor Fleur Hassan-Nahoum; and founder and director of Palestinian Media Watch, Itamar Marcus, whose presentations focus on how the Palestinian media misrepresents Mizrahi Jews, falsely claiming that Jews have no connection to the Middle East.

“In reality, all Jews are indigenous to the land of Israel, and the Mizrahi community has been an integral part of the Middle East for millennia,” Hali Spiegel, CAMERA’s director of campus programming and strategic relationships, told JNS. “We want to highlight their histories and their stories. We want to share stories of the mass expulsions of Jews from Arab and Muslim lands that are often forgotten or unknown.”

“Unfortunately, the challenges that Mizrahi Jews faced after their expulsion from their home countries have been ignored too often, especially on college campuses,” added Aviva Rosenschein, international director for CAMERA on Campus. “One of our goals is to educate university students on complex and pertinent issues that are either not normally addressed or may have been represented inaccurately.”

Rosenschein was particularly inspired by Israel’s Mizrahi Remembrance Month, which is dedicated to commemorating the departure and expulsion of 850,000 Jewish refugees from the Middle East and North Africa between 1948 and 1980.

“For years,” she continued, “we have encouraged students to raise awareness of and discuss the history, culture and remarkable diversity of Mizrahi communities.”