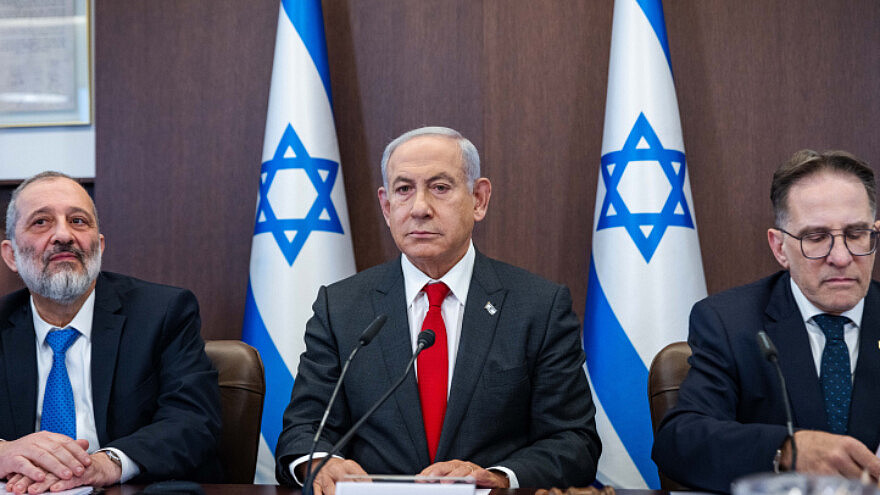 (January 10, 2023 / JNS) On Jan. 5, Israel’s Security Cabinet approved a series of retaliatory measures against the Palestinian Authority. These included sanctions against senior Palestinian officials, the withholding of Palestinian funds collected by Israel and a halt to illegal Palestinian construction in Area C of Judea and Samaria.

The measures were swiftly implemented: Palestinian Foreign Minister Riyad al-Maliki, on returning from a trip to Europe, found himself waiting in line at the Allenby Bridge crossing after Israel stripped him of his VIP pass. On Sunday, Israeli Finance Minister Bezalel Smotrich announced the transfer of $40 million in confiscated Palestinian funds to Israeli victims of terrorism, money that would have gone to support terrorists had it reached P.A. hands.

“The difference that we’re seeing, the actions of the government on all fronts, is really quite substantial,” IDF Lt. Col. (res.) Maurice Hirsch, director of legal strategies for Palestinian Media Watch, told JNS.

The measures, coming less than two weeks into the tenure of the country’s new government, are partly a response to the P.A.’s orchestration of a vote at the United Nations on Dec. 30 calling on the International Court of Justice to render an opinion on the legal status of Judea and Samaria. (Al-Maliki’s VIP pass was reportedly confiscated because of a meeting he had at the International Criminal Court in the Hague.)

“What the government did is focus on punishing the P.A. leadership. The government is saying that there’s a cost and a consequence for these actions,” said Hirsch. “P.A. subversion at the United Nations is a complete and utter breach of the Oslo Accords. The VIP permits are a function of the Accords. There’s no reason why we should have to continue as if nothing happened. They have to pay the price,” he added.

Israel’s move to freeze taxes and tariffs it collects on behalf of the P.A.—and which the P.A. uses to award terrorists and their families as part of its “pay-for-slay” program—is also a welcome decision, according to Hirsch. An Israeli law to withhold the funds has been on the books since 2017, but only half-heartedly enforced, he noted. “This will be particularly effective and forceful with the P.A.,” he said, as it will cost them 100 million shekels ($28 million) a month.

The tax freeze sharply contrasts with the policy of the previous Israeli government. In December 2021, then Israeli Defense Minister Benny Gantz held meetings with P.A. chairman Mahmoud Abbas in Ramallah and in his home near Tel Aviv. To prop up the P.A.’s faltering finances, in the first meeting Gantz promised Abbas a 500 million shekel ($144 million) loan, and in the second a 100 million shekel ($29 million) loan.

“At the same time, the P.A. had paid 600 million shekels [$172 million] in rewards to terrorists. It really was a direct circumvention of the [tax] freeze law. It was an outrageous decision,” said Hirsch.

The P.A., he continued, doesn’t really exist, at least not on paper as laid out in the Oslo Accords.

“The Palestinian Authority is meant to be made up of an elected parliament with a position of chairman of the P.A. that’s elected every four years, but it’s basically run by Fatah. Actually today [Jan. 9], Mahmoud Abbas is celebrating the first day of the nineteenth year of his first four-year term,” he said. “The idea of democracy in the P.A. is a scam.”

Mordechai Kedar, an expert on Arab affairs at Bar-Ilan University, agreed, telling JNS that the Bennett-Lapid government was trying “to resuscitate a dead body politic.” From the Palestinian perspective, said Kedar, the P.A. was “born in sin” as it was created to act as Israel’s policeman against other terror groups, namely Hamas and Palestinian Islamic Jihad.

With regard to Israel, the P.A.’s agenda is to destroy the Jewish state and erect a Palestinian state on its ruins, said Kedar. Western countries that pour money into the P.A. are propping up a fiction, he said, adding that this situation will continue until a courageous Israeli leader puts a stop to it.

Kedar insisted that the only viable plan is his “Emirates Plan,” which would divide the country’s Arab population into its local parts based on major city centers, thus recognizing the central role the tribe plays in Arab society.

Although Israel’s government has not adopted Kedar’s plan, he said he is more hopeful than he has been in the past that the government will make the correct decisions. Prime Minister Benjamin Netanyahu heads a solidly right-wing government, unlike in earlier coalitions, when he was dependent on center-left politicians like Benny Gantz and Yair Lapid.