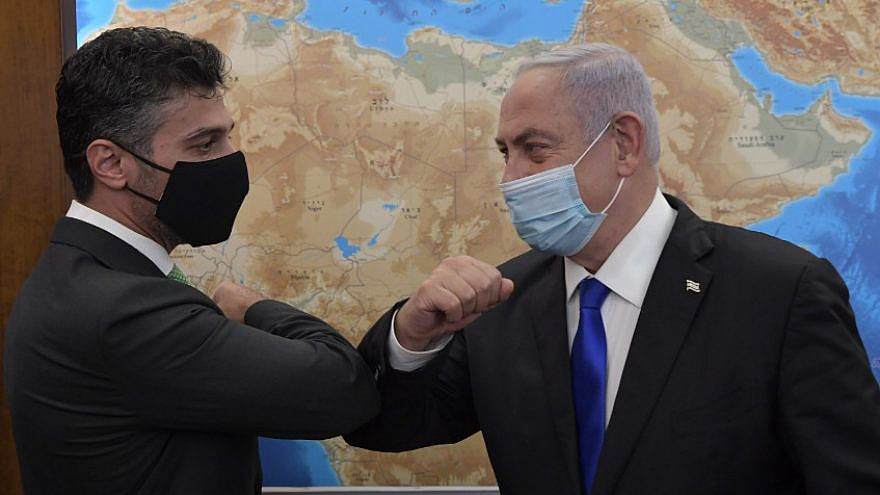 Israeli National Security Council head Meir Ben-Shabbat and other senior officials joined the meeting, which took place at the Prime Minister’s Office in Jerusalem. The meeting was said to have focused on the potential for developing joint regional and bilateral projects in a broad range of fields.

To which a smiling Netanyahu replied, “And I would say competence, too. Competence is important. But we have all that in abundance, so you’re going to have your hands full. We’re going to make sure that you do.”

On Monday, Al Khaja presented his diplomatic credentials to Israeli President Reuven Rivlin at the President’s Residence in Jerusalem.

The national anthems of Israel and the UAE were played by the Israel Defense Forces’ band at the ceremony on Monday, during which the new UAE ambassador reviewed an IDF honor guard.

“The entire Israeli people welcomes you with joy,” Rivlin told the ambassador after greeting him in Arabic. “This will be your most important mission—to welcome the hands reaching out to you, to meet the Israeli people and to get to know them up close. Treaties are signed by leaders, but real, sustained peace is made between peoples, face to face.”

Al Khajah was installed on Feb. 14 as the UAE’s Israeli ambassador in an official ceremony in Abu Dhabi in the presence of Sheikh Mohammed bin Rashid Al Maktoum—vice president and prime minister of the UAE, and the ruler of Dubai—who wished the new ambassador success and urged him to work to achieve friendly and cooperative relations with Israel.