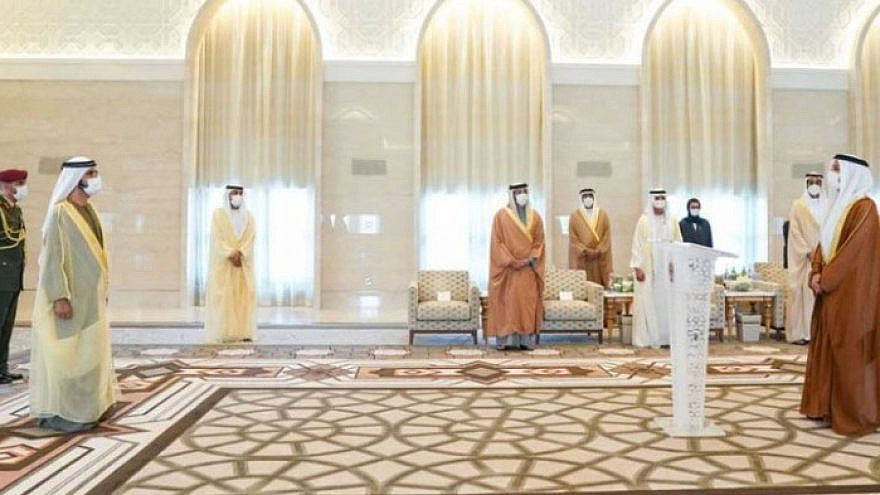 (February 15, 2021 / JNS) The United Arab Emirates on Sunday swore in the country’s first-ever ambassador to Israel.

Ambassador Mohammad Mahmoud Al Khajah was installed in an official ceremony in Abu Dhabi, in the presence of Sheikh Mohammed bin Rashid Al Maktoum, vice president and prime minister of the UAE and ruler of Dubai, said the Dubai Media Office, which tweeted out the event.

Al Maktoum wished Al Khajah much success and urged him to work to achieve friendly and cooperative relations with Israel. Al Khajah pledged to carry out his job with integrity and sincerity, reported Gulf News.

A number of ministers, senior sheikhs and other officials attended the event.

Avi Berkowitz, Special Representative for International Negotiations under Trump and a key figure on the U.S. team that brokered the accords, took to Twitter to share his elation at watching the UAE’s ambassador to Tel Aviv being sworn in.

It’s hard to express the joy this brings to me and the team – led by President Trump and Jared Kushner – that worked on the Abraham Accords – thank you to the UAE for leading the way. https://t.co/lseqvBApol

The UAE Cabinet approved the assignment of an ambassador to Israel on Jan. 24. The same day, Israel’s Foreign Ministry announced the opening of an official diplomatic mission in Abu Dhabi, with Israel’s ambassador to Turkey, Eitan Na’eh, appointed to head the temporary mission until a permanent ambassador is appointed.