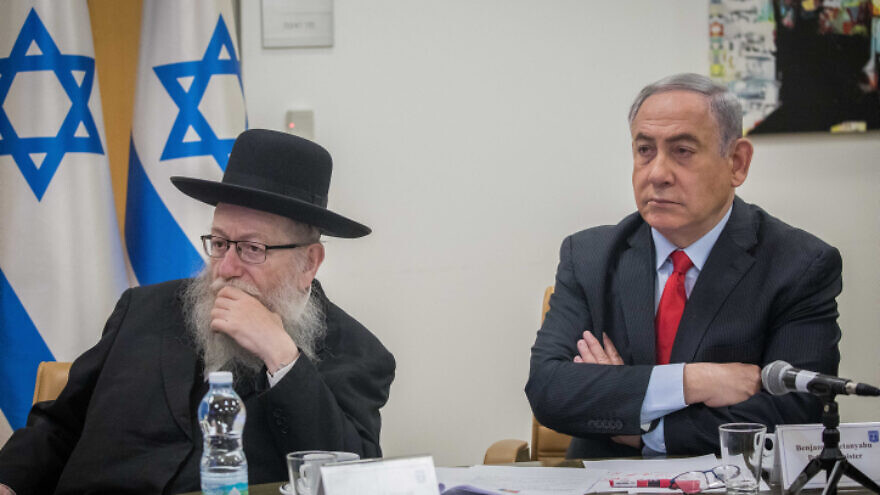 Litzman, 71, whose wife Chava also tested positive for coronavirus, was reported to be in good condition. None of the other leaders were yet reporting symptoms, and many were set to be quarantined in their offices so they could continue their work on behalf of the country.

Due to late adoption of social distancing practices, Israel’s ultra-Orthodox community, of which Litzman is a member, has been particularly hard hit in recent days. In the largely ultra-Orthodox city of Bnei Brak, 900 people have been diagnosed with coronavirus, including 177 in just the past 24 hours—which means one out of every seven infected Israelis is from the city.

To highlight the high rate: While Bnai Brak has under 200,000 residents, the 900,000-person city of Jerusalem has 916 confirmed coronavirus cases.

Due to Bnei Brak’s high infection rate, Netanyahu on Wednesday evening instituted a strict quarantine on the city. In a televised address, he also advised all Israelis to wear masks or other face coverings when out in public.

During his address, Netanyahu also said the government would issue small stipends to pensioners and NIS 500 ($137) for each minor child in a family, with payments made up to four children.

Additionally, anyone arriving from abroad as of Thursday will be required to enter quarantine at a hotel dedicated to the purpose for 14 days, a restriction Netanyahu announced the same day reports revealed he had vetoed a similar plan tabled by Israeli Defense Minister Naftali Bennett.

Netanyahu reiterated that Israelis should maintain social distancing even with their own family members, urging people not to invite elderly grandparents or bring their children in national or army service home for the Passover holiday.

Netanyau beseeched the public to heed Health Ministry directives, saying it could make a big difference in differentiating Israel from countries currently facing massive and growing infection rates, somberly noting that America is forecast to lose 100,000 to 250,000 people to the virus in the next few weeks. “That’s the lighter forecast,” he warned.

As of Thursday morning, 6,211 Israelis were diagnosed with coronavirus, with 107 in serious condition and 83 on ventilators. Two more Israelis died from the virus, raising Israel’s toll to 32.

According to the Health Ministry, 3,201 medical staff are in quarantine, down from 3,498, including 701 doctors and 1,138 nurses, and 900 new nurses have been licensed to practice under an accelerated program.