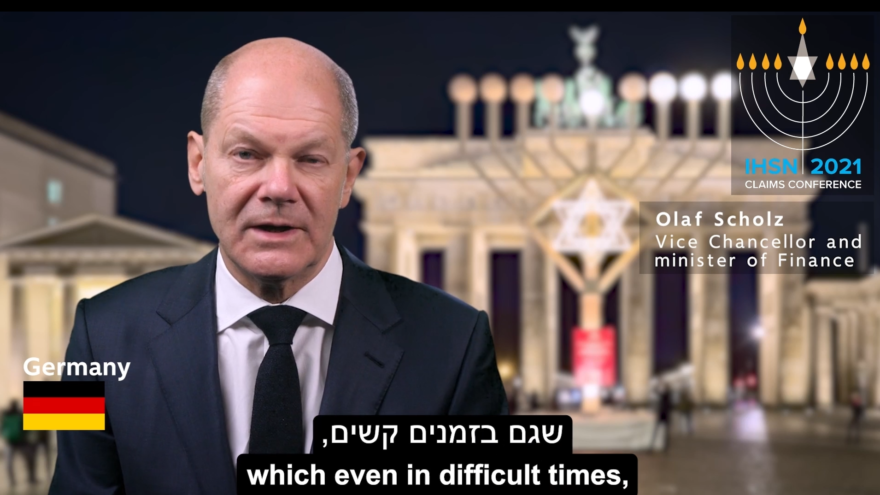 “Anti-Semitism, the belittling of Jewish citizens, hatred towards Israel—we will not tolerate any of it in Germany. Be assured: Our commitment will not waiver,” Scholz said during the online event on Tuesday. “Today, Jewish life is once again enriching our society. Israel and Germany are close partners. We must not put these precious gifts at risk. That is why I promise you: We will continue to do everything we can to protect Jewish citizens in the future and to counter all anti-Semitism. We will fight darkness with light.”

The Nov. 30 celebration, which took place on the third night of Hanukkah, honored Holocaust survivors for their sacrifice and contributions to the world; a number of them spoke as part of the proceedings.

Also in attendance was Israeli President Isaac Herzog; leaders of international Holocaust institutions; and Holocaust envoys from the United States, the United Kingdom, Canada and Germany. Emmy-nominated entertainers Jason Alexander, Tovah Feldshuh and Mayim Bialik also shared remarks, and musical performances were given by Barry Manilow, the Maccabeats, and the duo Steven Skybell and Jennifer Babiak.

The first IHSN was held in 2017 and has grown each year to include participants from more than 15 countries. The event ends with a livestreamed menorah-lighting ceremony at the Western Wall in Jerusalem.

Abe Foxman, a Holocaust survivor and former director of the Anti-Defamation League, said “it’s imperative for Holocaust survivors to bear witness and to tell their story. And certainly, what better time than on Hanukkah when we not only remember our past history, but we celebrate rebirth and the future.”