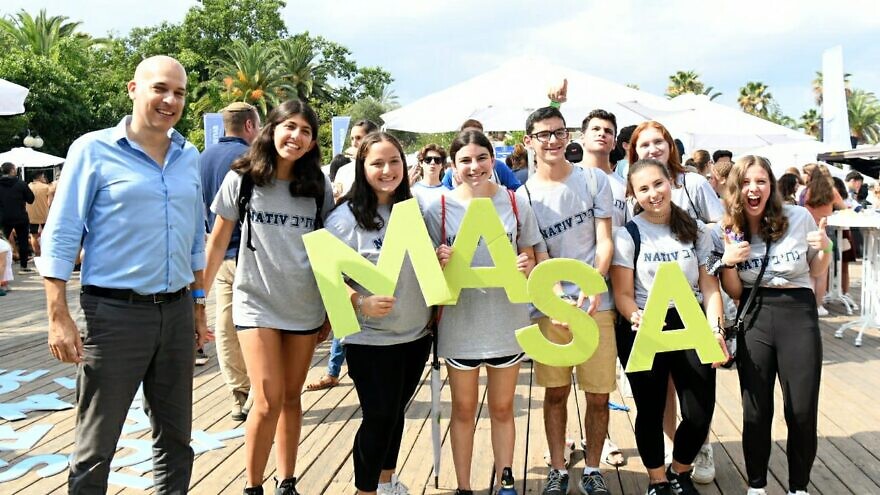 (October 20, 2022 / JNS) When Jennifer Handel was growing up, she didn’t engage in any Jewish formative activities. But once she participated in Masa ETF, a long-term young professionals program in Israel, everything changed.

“Without my Masa program, I would not have the life I have today at all,” Handel said.

After her trip, Handel ended up serving as a Hillel professional for 10 years at two different colleges, and is now director of Israel engagement at the Jewish Federation of Greater Atlanta.

“[Through Masa], I changed my career, became more involved with my Judaism and have accepted that my role in the Jewish community is perfect exactly as it is without needing to fit a mold or stereotype,” she said.

Handel is far from the only young Jewish person who has taken part in a long-term program in Israel and come out of it more interested in Judaism than ever.

According to a new study from Masa Israel Journey, young adults who spend at least four months in Israel participating in a long-term program are more likely to be engaged with their Judaism. These programs, which are designed for young adults of all Jewish affiliations, are fostering Jewish continuity and the next generation of proud Jews—even among those who weren’t engaged in Jewish life at all prior to their participation, just like Handel.

Impact:NPO, a consultancy that measures the influence of nonprofit programs, surveyed 2,433 young Jewish adults from the U.S. in 2021. Nearly 500 respondents had participated in Masa Israel Journey, a joint initiative of the Government of Israel and The Jewish Agency for Israel that offers a variety of long-term and immersive programs in Israel.

The Masa study results come at a time when Jewish young adults feel less connected to their Judaism than prior generations. A 2020 Pew Research Center study revealed that 41% of Jews ages 18-29 are not affiliated with any particular branch of Judaism and do not identify with Judaism as a religion.

Young Jews are not as connected to the Jewish state as older Jews, either. Most young Jews between the ages of 25 and 40 either disengage with Israel completely because they disagree with its policies or they are afraid of being ostracized for supporting it.

But when young Jews participate in long-term programs, they are over twice as likely to feel strongly connected to the Israeli people, and nearly three times as likely to strongly agree that Israel influences their identity compared to individuals who have never been there.

Masa participant Patka Zasławska arrived in Israel right before Rosh Hashanah last year to take part in the Dance Journey Program & Destination Israel program. Looking back at her experience, she said she “discovered my Israeli side, met amazing friends, learned how to drive in Tel Aviv, organized five dance and movement festivals in Poland, and learned to appreciate myself more.”

Only 12 months later, she has fallen in love with her Jewish roots and the country of Israel, just like Handel did. Zasławska is now preparing to go forward with a huge life change: she’s making aliyah.

“I just started a new job in a medical startup, rented my first apartment in Israel, and in a few days, I will receive my new Israeli passport,” she said. “I am sure we have all heard the saying, ‘New year, new me,’ and I couldn’t agree more.”

Kylie Ora Lobell is a freelance writer in Los Angeles. She has written for “New York Magazine,” “The Los Angeles Times,” “The Washington Post,” “The Jewish Journal,” Aish, Tablet, Chabad.org, “The Forward” and JTA.