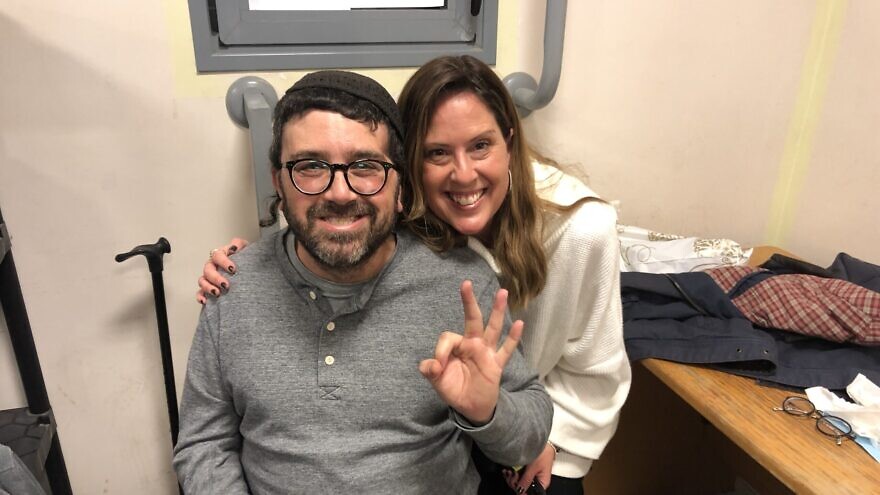 (March 27, 2022 / JNS) On Aug. 6, 2017, Efrat residents Eitan and Leora Ashman and their four children were making their final preparations for a family vacation the next day. That night, Leora heard some rumblings from the kitchen downstairs. “I heard some chairs banging around, and I thought it was the dog,” she told JNS. Leora rushed to the kitchen, where she found Eitan on the floor, unconscious. Medical personnel were immediately called, and Eitan was rushed to the hospital.

It turned out that Eitan had suffered a massive left-side ischemic stroke. Doctors determined that his carotid artery had torn, causing two major blood clots that cut off blood flow to the brain, causing the stroke. Dr. Eli Ben-David, a family friend and neuroradiologist at Hadassah Hospital in Jerusalem, told JNS that the situation was touch and go as doctors fought to clear the blood clots.

Eitan, a young and healthy 42-year-old at the time, survived the ordeal. But the sudden episode changed their lives forever.

“Eitan lost the use of his right arm; he had right-side hemiparesis [weakness] and chronic pain, neural fatigue, memory loss and aphasia as a result of damage to the language center in the brain,” said Leora.

Aphasia is a condition that robs a person of the ability to communicate. It can affect one’s ability to speak, write, work with numbers and understand language, both verbal and written. Leora said that aphasia was a term that the family had no prior information about.

“We had to learn about it by living through it,” she said.

But the page morphed from just a place to post updates to a tool used by the Ashmans to educate about what people living with aphasia go through, and perhaps even more importantly, to teach the general public how to communicate with those suffering from aphasia while simultaneously promoting their inclusion in society.

Fast-forward to last Wednesday night, about four and a half years after Eitan’s stroke—after a long and still ongoing period of recovery, therapies, successes and setbacks—to an event in the Efrat Medical Center conference room. More than 100 community members had gathered to hear a presentation prepared by Leora and Eitan, titled “The Koach Eitan Initiative: Educating and Raising Awareness About Stroke and Aphasia.” 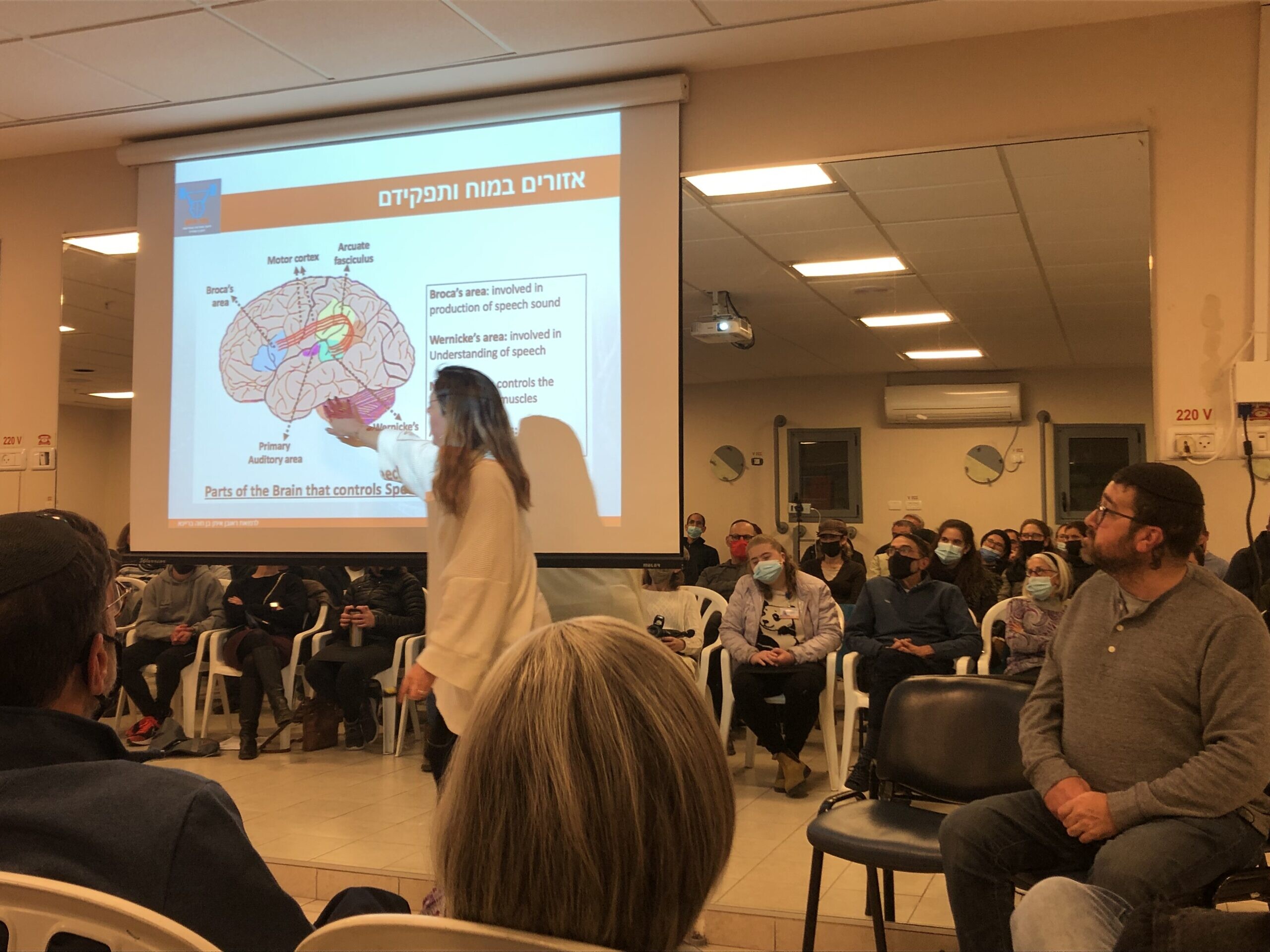 Leora said it was held because “I decided we had to teach people, now that Eitan is ready to join the forces of teaching. You have to be extremely brave; you have to have a lot of courage to want to explain to people why you are the way you are—why you can’t speak. You want to converse, but you have to teach them how. The person on the other side has to be patient and has to want to learn how to communicate.”

Eitan struggled but succeeded in sharing with the room: “It’s frustrating for me. I know what I want to say but I can’t get the words out.”

Leora stressed that “aphasia is loss of language, not intellect. Aphasia is the invisible disability. Everyone assumes he [Eitan] is OK. But at the bank or the supermarket, people like Eitan can’t say what they want to say, and nobody knows how to help.”

During the presentation, Eitan held up his notebook—detailed cards with pictures and words, with the cover saying “my name is Eitan Ashman, and I have aphasia.” Eitan is able to point to the pictures and words to explain to those he’s with what he wants or needs.

“Other people are the ones who need to take the initiative and ask the questions,” said Leora. “At the supermarket, for example, if that supermarket employee knew Eitan had aphasia, he would know to ask the questions and not wait for Eitan to make the first move, which is harder.”

Tova Cern is a family friend of the Ashmans and also the founder of SiMedic Trauma, a company that provides emergency first-responders with unique training and simulation solutions. With over 25 years of field experience as an EMT herself, Cern has been developing educational tools to assist in emergency situations for two decades.

As a result of what happened to Eitan, she incorporated the topic of aphasia into her materials so first responders can quickly recognize whether a person in distress has the disorder.

“Many times, even emergency caregivers don’t know what aphasia is, and I really wanted to change that,” Cern told JNS. “It’s something that needs to be known; people need to know how to deal with it.”

Cern and her company produced a short educational movie in collaboration with the Efrat Medical Center and its CEO, Eyal Zahavi, to be utilized by “Koach Eitan,” which was screened at the event. It simulated a crisis in which a person with aphasia is injured and can’t express what happened to him, or, for example, that his children are waiting to be picked up from school. 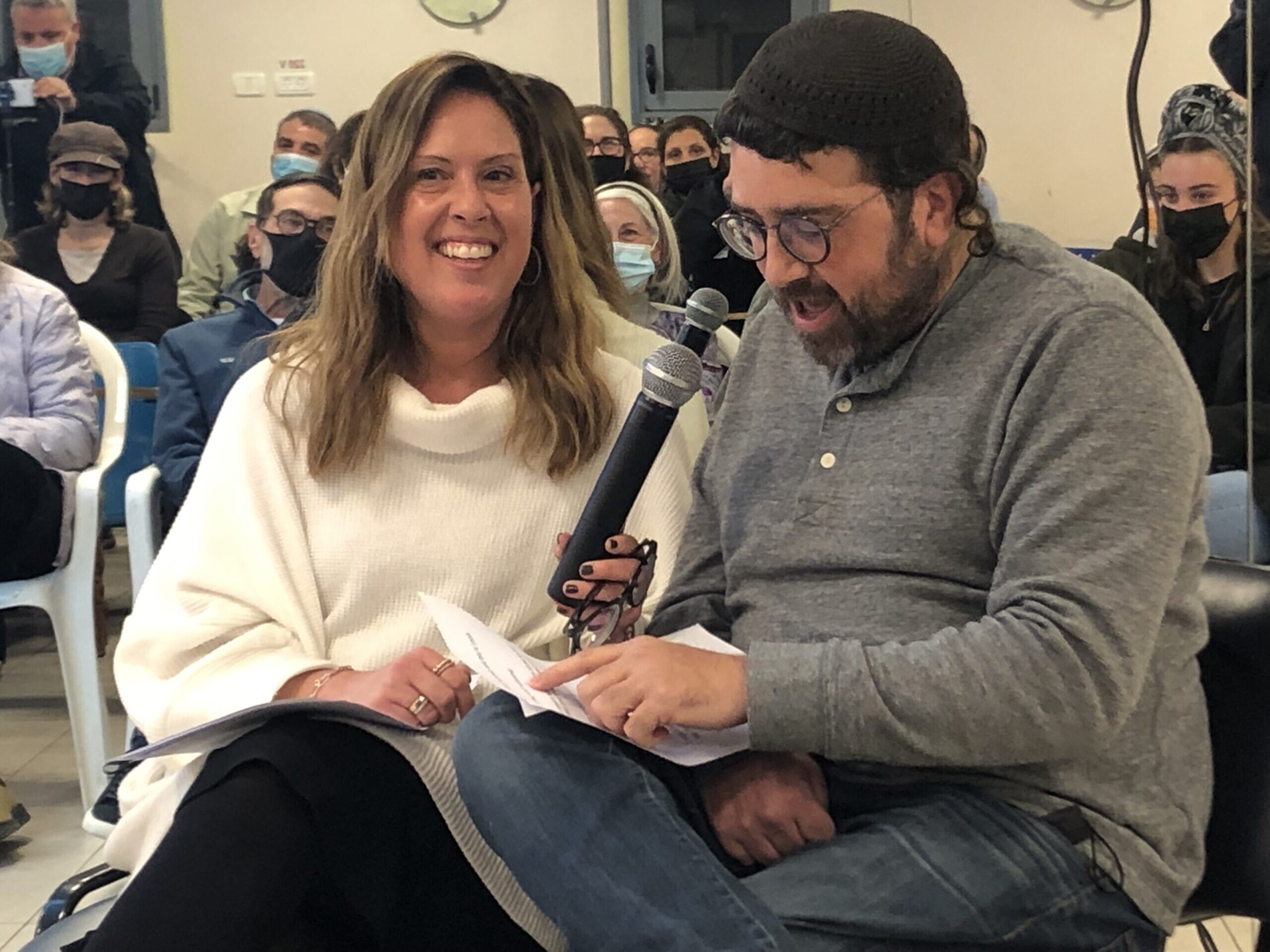 Eitan Ashman, who suffers from aphasia, participates in a presentation at the Efrat Medical Center together with his wife Leora, March 2022. Photo: Josh Hasten.

The film demonstrates how medical professionals must show patience and utilize tools at their disposal, including picture charts so that individuals with aphasia can communicate and receive the proper care.

“What Eitan and Leora are doing is amazing. It is so hard to be in that position where you can’t speak; it has to be so frustrating and to find the strength to make that your mission, I can’t tell you how much I admire them,” said Cern.

Leora went on to share that “Koach Eitan” has expanded in leaps and bounds, becoming far more than just a Facebook page.

With the goal of “empowering families and communities to help those battling the effects of stroke and aphasia,” the group’s programs include providing educational workshops; utilizing social-media platforms with media resources and other content; educational events; and the creation of a support network for families.

“What we are trying to do is to teach the public and the world the word [aphasia], what it means and how to communicate with those people, and to give people with aphasia a better chance at life and living as an equal,” said Leora.

“Aphasia is more common than Parkinson’s disease,” she continued. “A lot of people didn’t know what Parkinson’s was until actor Michael J. Fox had it. Five years ago, nobody really knew about ALS until the ‘ALS ice-bucket challenge.’ And then everyone knew. Our hope and goal is to educate the world, and have aphasia become a buzzword.”

Leora said “Eitan needed these four years to figure out who he was again. He had to reinvent himself, and that takes so much strength and courage. He is the one teaching that you really have to be brave. Together, we are going to try to teach people through his life experiences. That’s the only way people are going to understand.”