(May 25, 2022 / JNS) If an American Jewish teenager was attacked and nearly murdered by anti-Semites while on his way to a synagogue in New York or Chicago, it would be headline news.

So why is it that nobody has ever heard of Avraham Moshe Klinerman, who was attacked and nearly murdered by anti-Semites while on his way to a religious site in Israel?

Last year, 16-year-old “Moishy,” as he is known, was part of a group of Jewish worshippers visiting the Tomb of Joshua, which is situated in the Palestinian Arab village of Kifl Haris.

The bus on which he was riding was attacked by Palestinian Arab rock-throwers. In the Middle East, stoning is a centuries-old method of execution. To Palestinian Arab extremists, a visit by Jews to a Jewish religious site is a crime that deserves to be punished by death, even though the right to make such visits is guaranteed in the Oslo Accords.

According to The Times of Israel, Moishy suffered “a serious head injury” in the attack. After his hospitalization, he was left with “a prominent Harry Potter-like scar above his left eye,” not to mention the emotional trauma he must have suffered from the experience of almost being murdered. 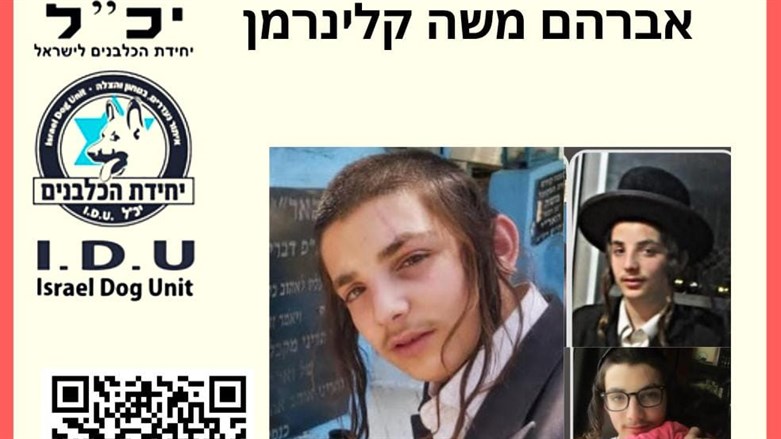 Moishy Klinerman was one of the thousands of Jews in Israel who have been injured by rock-throwing Arab terrorists over the years. Some of these victims have been permanently maimed, such as losing an eye or suffering irreversible neurological damage.

Their names are almost never reported by the news media. It was only by sheer accident that his name finally made it into print at all.

That accident was an article in The Times of Israel about three Jews who traveled to the Israeli town of Meron for religious gatherings and then disappeared. One of those three individuals disappeared in the Meron forests in 1995; one in 2019; and Moishy Klinerman vanished there two months ago.

In the course of describing Moishy’s background, the reporter mentioned last year’s stoning attack. If not for the tragedy of his recent disappearance, nobody would ever have known about the earlier near-death experience at the hands of Arab terrorists.

At least 16 Israelis, including four American citizens, have been murdered by Arabs throwing rocks or bricks at them. Ironically, one of those attacks happened near the same village of Kifl Haris. That was in 2013, when residents of the town stoned an automobile in which 2-year-old Adele Biton was riding. A rock struck her in the head. She spent two brave, agonizing years clinging to life before finally succumbing to her injuries.

In the United States, someone who throws a rock or brick at a motorist is regarded by everyone as a despicable criminal. The justice system ensures that the assailant is brought to trial and punished. In 1990, three teenagers threw rocks at cars on the Capital Beltway in Washington, D.C., wounding 30 drivers or passengers, including a girl who suffered irreversible brain damage. The attackers were convicted of “assault with intent to murder,” and each sentenced to 40 years in prison. An editorial in The Washington Post asked, “What’s the difference between assault with a deadly weapon—a shooting—and assault with rocks that hit cars at potentially lethal speeds?”

The Palestinian Authority, by contrast, regards Arabs who throw rocks, bricks and other hazardous materials at Jews as patriots and heroes. The P.A. security forces refuse to arrest them, the P.A. media glorifies them, and the textbooks used in P.A. schools encourage them. Trying to stone Jews to death has become a pastime for Palestinian Arab youngsters, just as hopscotch and sandlot baseball are pastimes for American children.

The P.A. even offers financial rewards to rock-throwers. It pays salaries to Palestinian rock-terrorists when they are in jail and then additional bonuses when they are released. The $357 million that the Biden administration gives the Palestinian Arabs annually frees up the money for the P.A. to pay terrorists.

What can be done about this?

We can urge the media to report the names of Israeli victims of rock-throwing terrorism. We should have known Moishy Klinerman’s name when he was attacked; it shouldn’t have taken his disappearance to bring his name into the news.

Jewish groups that send funds to Israel should earmark some of it for the families of victims of Arab rock-throwers. The compensation the families receive from the Israeli government is never enough to cover the lifelong consequences that they suffer.

Most of all, we can press American Jewish leaders to take this issue seriously. Jewish leaders who visit Israel should meet with the families of rock-throwing victims. They should bring victims or their relatives to the United States on speaking tours. They should commission a full-scale investigation into the deaths and injuries caused by Palestinian Arab rock-throwers. American Jewish organizations are well-known for their skill at carrying out expert studies of issues that they care about. The suffering of thousands of innocent Jews like Moishy Klinerman is something worth caring about.

Stephen M. Flatow is an attorney and the father of Alisa Flatow, who was murdered in an Iranian-sponsored Palestinian terrorist attack in 1995. He is the author of “A Father’s Story: My Fight for Justice Against Iranian Terror.”