All too often, the Palestinian Authority is dismissed as a failed entity. This is wishful thinking. To the contrary: the P.A. is winning one of the most important battles it has ever waged against Israel. It is the same battle the Zionist movement and later the State of Israel successfully waged: that of strategic settlement. This means the creation of rural and urban infrastructure to consolidate control over territory required to create a state.

Israel’s Homa v’Migdal (tower and stockade) movement, the War of Independence, the heroism and durability of the kibbutzim on the Syrian front before the Six-Day War, Kiryat Shmona and the kibbutzim in the Hula Valley in the 1980s, and Sderot and the kibbutzim around Gaza in the past two decades are a living testimony to the historic importance of “strategic settlement,” a term first coined by the Zionist movement in 1942.

Alas, this Zionist strategy has now been successfully adopted by the P.A., especially in the fight for control over the majority of land in the West Bank called Area C. According to the Oslo Accords, Area C was to remain under exclusive Israeli jurisdiction until the achievement of a final-status settlement.

According to a highly detailed report by Regavim, an organization that documents illegal encroachment on state land (as well as private property), the P.A. over the past decade has been winning the battle for control over Area C. In 2009, the majority of built-up space in Area C was populated by Jews (11,614 acres compared to 11,367 acres for the Palestinians). By 2019, after an unrelenting 10-year settlement push directed by the P.A., most of the built-up space is Palestinian (19,521 acres compared to 14,085 acres inhabited by Jews). Such a feat rivals even the most successful settlement projects of the Jewish Agency during the Mandate. Indeed, it may even outshine them.

More important than the number of dwellings that were constructed are the qualitative dimensions of the building spree. The clusters were created as part of a strategic plan conceived in 2009 by then-P.A. Prime Minister Salam Fayyad, a former senior economist at the World Bank, to create the State of Palestine from the ground up rather than leave it to diplomacy. 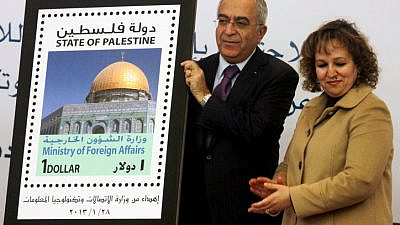 Then-Palestinian Prime Minister Salam Fayyad participates in the unveiling of the first postage stamp bearing the name “State of Palestine,” on Jan. 28, 2013. Photo by Issam Rimawi/Flash90.

Sound familiar? It should. This was the rejoinder of David Ben-Gurion and his Mapai stalwarts to both Chaim Weizmann and Ze’ev Jabotinsky, who placed greater faith in diplomacy to create the Jewish state. Labor’s strategy was popularly called “one more dunam [a quarter of an acre], one more goat.” Thankfully, that strategy won the day in 1936 and lasted up to and beyond the creation of the Jewish state.

Behind the unrelenting Palestinian strategic settlement drive are a host of institutions within the P.A., which commands a budget of $4.7 billion. Those institutions include the P.A. Interior Ministry, Planning and Administrative Development Ministry and Agriculture Ministry, a commission within the Interior Ministry responsible for the registration of land and water rights, the Local Government Ministry and the “Colonization and Wall Resistance Commission,” which is run by an official with ministerial status. These ministries coordinate extensively on planning and implementation. 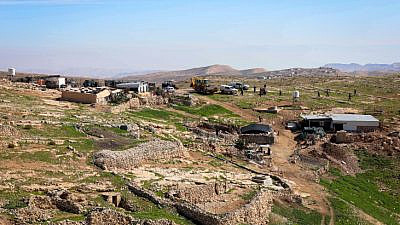 A 160-page report published in 2016 illustrates the P.A.’s planning capacity. One hundred and ten local outline plans have been prepared for 119 Palestinian communities—most of them in Area C.

Behind the P.A.’s successful strategic settlement drive stands an array of European Union and United Nations institutions that both finance the project and provide much of the planning know-how. They do this either directly or indirectly by offering capacity-building programs and venues.

The Palestinian goal of seizing control over Area C also involves organized protest and violence, which is directed both from the ground up and from the highest government echelons down.

The “Colonization and Wall Resistance Commission” is responsible for coordinating those efforts. It is headed by former Fatah Tanzim member and former security prisoner Walid Assaf. The commission creates and works with local “resistance” committees, often headed by Fatah members in tandem with the youth committees of the various PLO factions (mostly Fatah’s Shabiba movement) and district-level Fatah organizations. They are tasked with organizing the Palestinian population in surrounding villages to confront Israel Defense Forces troops, intimidating the Israeli Civil Administration as it attempts to monitor the area, harassing settler outposts and settler grazing efforts, and taking over hilltops, springs and archaeological sites that connect Jews to their past. The aim therefore is not only to strategically settle the area but to drive away the Jewish settlers. 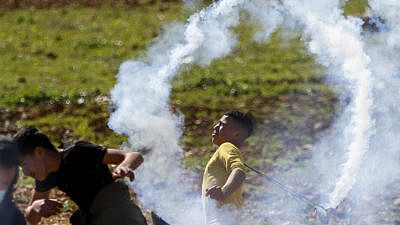 Palestinians clash with Israeli security forces during a protest in the village of Beit Dajan, near Nablus, Feb. 12, 2021 Photo by Nasser Ishtayeh/Flash90.

The factor that best explains the Palestinians’ success in this venture is that while the P.A. is mobilized, consistent and focused on achieving the goal, the Israeli government, civil administration and judicial branch largely turn a blind eye to the build-up.

There are many reasons why Israel has reached this sorry state of affairs in Area C. Above all, the near-total freeze on Jewish settlement over the past two decades created a vacuum that the P.A. rushed to fill. Neither Israel’s Justice Ministry nor the Israeli courts do much to counter the Palestinian “lawfare” that enables them to illegally encroach upon and take control over the state lands that form the bulk of Area C. Even when the courts rule against such encroachment, as in the case of Khan al-Ahmar (an illegal Bedouin encampment near Maaleh Adumim), the authorities do not honor the ruling. 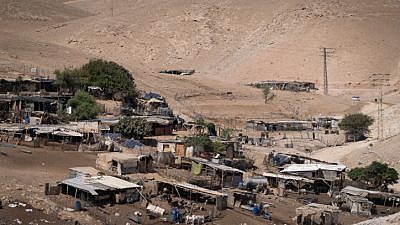 The Palestinian Bedouin village of Khan al-Ahmar, in Judea and Samaria, on Sept. 21, 2018. Photo by Yaniv Nadav/Flash90.

These developments are mostly determined by politics, and especially by the leadership. The saying attributed to Ben-Gurion that it is not what the Gentiles say but what the Jews do rings true in this context. Merav Michaeli’s recent victory in the Labor Party reflects the extent to which Israeli politicians are divorced from the spirit of the party’s founders, who championed Israeli strategic settlement.

Israeli Prime Minister Benjamin Netanyahu did not grow up in such an environment, but one hopes his strong strategic sense will lead him to acknowledge that however important the fruits of diplomacy, such as normalization with moderate Arab Sunni states, their importance pales in comparison to the need to win battles like that against strategic Palestinian settlement in Area C.

Hillel Frisch is a professor of political studies and Middle East studies at Bar-Ilan University, and a senior research associate at the Begin-Sadat Center for Strategic Studies.