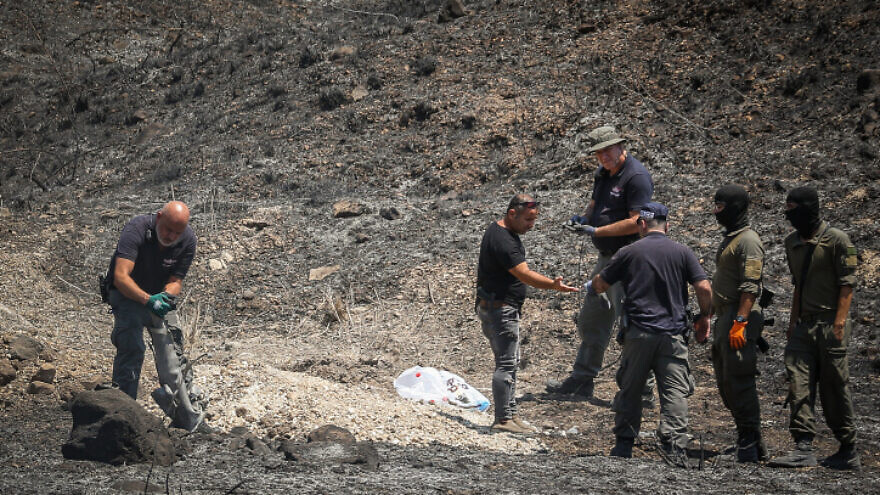 Israeli security at the scene of where a missile fired from Lebanon, into northern Israel, hit in an open field, near the city of Kiryat Shmona, Aug. 4, 2021. Photo by David Cohen/Flash90.
Republish this article
690 WORDS
Spread the word.
Help JNS grow!
Share now:

(August 4, 2021 / JNS) A Palestinian terror faction likely fired the three rockets from Lebanon at Kiryat Shmona in northern Israel on Wednesday; however, the precise motivation for the act of aggression isn’t immediately clear.

The attack does not bear the hallmark of Hezbollah but does fit the pattern of a Lebanese-based Palestinian armed cell, possibly belonging to Hamas, firing on Israel, as it likely did on July 20 as well (Iron Dome intercepted one of the projectiles in last month’s attack, unlike the current attack, in which no rockets were intercepted).

While the specific motivation for the attack is still under question, the establishment of a precedent involving Palestinian cells terrorizing northern Israeli communities, possibly with Hezbollah’s knowledge, is beginning to take hold.

It is this precedent that the Israel Defense Forces and the Israeli government will seek to cut down at its early stage. The IDF’s response to the attack—three waves of artillery fire directed at areas along the Lebanese border—is more extensive than Israel’s reply to the July rocket attacks; still, it is a cautious response designed to avoid a broader security deterioration at a time when the Lebanese state is on the brink of collapse.

“We estimate that these were Grad-type rockets,” former intelligence officer Maj. (res.) Tal Beeri, the director of the research department at the Alma research center, which analyzes security threats to Israel emanating from Syria and Lebanon, said on Wednesday. “At this stage, the identity of the attackers is not known.”

Indications from Lebanon are at the IDF artillery counterstrikes hit open areas in western and eastern Lebanon, said Beeri.

He assessed that the area used to fire on Israel is the Al-Arkub region of Southern Lebanon, from where rockets had been fired in the past at Israel during its May conflict with Hamas in the Gaza Strip, also by Palestinian terrorists.

In running through the possible scenarios behind the action, Beeri said the chances of the attack being designed to mark the annual commemoration of the Beirut port blast, or the upcoming Ashura Shi’ite holiday, are very low. 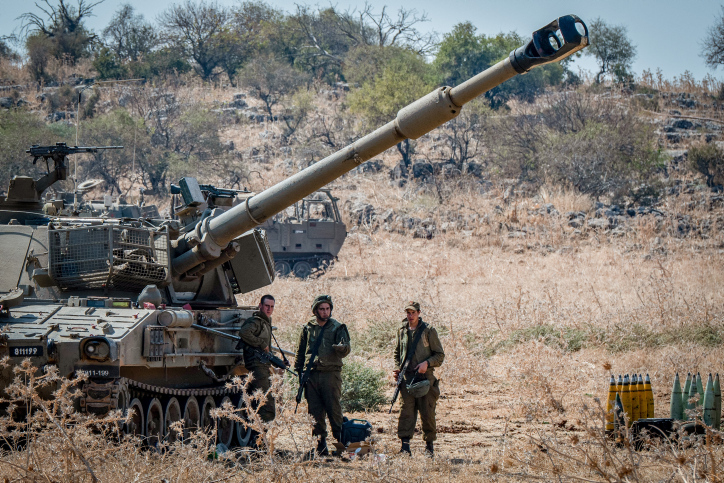 Other scenarios suggest a Palestinian cell conducted the attack with the knowledge and approval of Hezbollah, though it is also possible that Hezbollah did not know about the launch ahead of time, said Beeri.

If Hezbollah was aware, the rocket fire could be part of Iran’s policy of safeguarding the continuity of “comfortable terror attacks” against Israel. Under this scenario, terrorism will occur from where it’s secure for perpetrators to strike Israel at any given time; at this time, Lebanon, with its growing anarchy, is that place. Similarly, it is operationally comfortable for Iran to conduct terror attacks at sea on Israel-linked ships in the Persian Gulf.

A more dangerous scenario listed by Beeri is that Hezbollah actively initiated the attack, either directly or through a proxy, including through the use of Palestinian attackers to disguise its initiative to send a message to Israel, warning it against intervening in internal Lebanese affairs.

“It cannot be ruled out that Hezbollah is seeking to warn Israel about such an intervention,” said Beeri. Hezbollah blames Israel for encouraging Lebanese communities to act against it and attempting to influence international aid (while limiting Iranian aid) to Lebanon, which is suffering a severe political-economic crisis.

While in last month’s attack, Hamas was probably looking to respond to Temple Mount tensions in Jerusalem by firing from Lebanon in order to avoid drawing Israeli fire to Gaza, the motivation for Wednesday’s attack remains more cryptic.

Either way, the incidents again raise difficult questions about the ability of UNIFIL and the Lebanese Armed Forces to play an effective role in stabilizing southern Lebanon, said Beeri.

As Israel’s intelligence community continues to work on deciphering the attack, the defense establishment and the Israeli cabinet will determine what is necessary to cut short the precedent of regular rocket fire from Lebanon, irrespective of the identity of the attackers or their motivation.