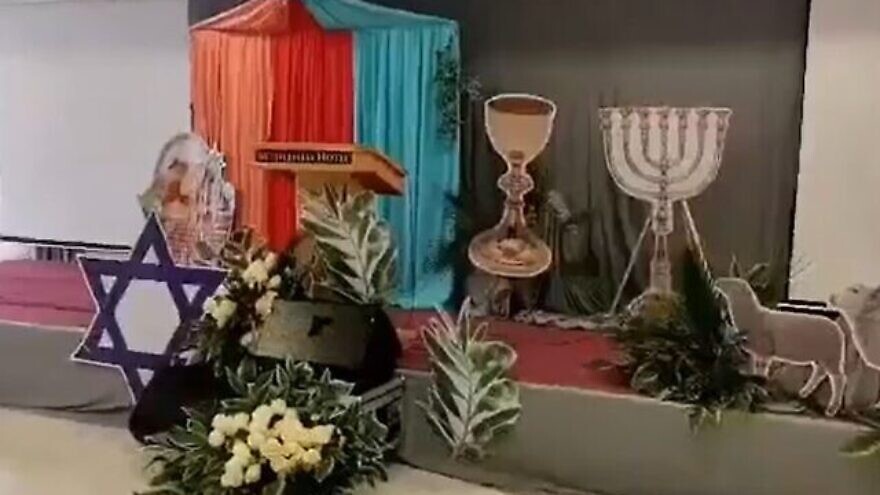 Jewish symbols are seen at the Bethlehem Hotel in the city of the same name, Oct. 10, 2022. Source: screenshot.
Spread the word.
Help JNS grow!
Share now:

(October 11, 2022 / JNS) Palestinian gunmen fired at a hotel in Bethlehem after social media posts showed that an events hall in the building contained Jewish symbols.

Photographs from a stage in Hotel Bethlehem contained a Magen David, a Menorah and a glass of wine, Israel Hayom reported on Monday.

The Palestinian Authority’s Tourism Ministry said in a statement that the hall has been sealed off to visitors and that an investigation has been opened to clarify the affair.

According to the report, the gunmen fired at the hotel as “an act of resistance” against what they described as “normalization” with Israel, with activists in Bethlehem calling for a demonstration against the hotel.

Hotel manager lyas al-A’rja said the Jewish symbols were set up for a party by Filipino tourists who had not received permission.

Fatah operatives including armed Tanzim militia members arrived at the hotel in response to the call, and P.A. security personnel deployed in an effort to prevent them from entering the establishment.

“We condemn in full force any action that testifies to normalization. We will never let that happen. We warn all those who plan to hold a party and events tied to normalization, and we will respond to that with an iron fist,” said one of the operatives, according to the report.