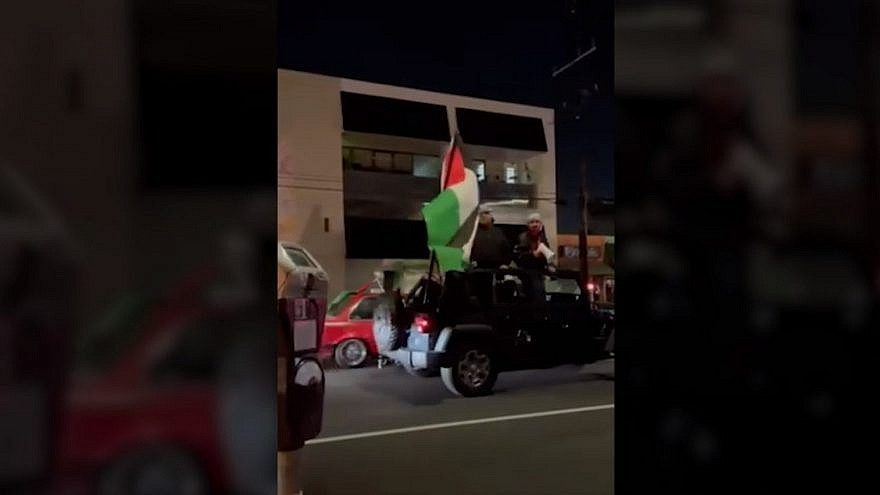 Pro-Palestinians confront Jewish patrons at a restaurant in Los Angeles as the conflict between Israel and Hamas in Gaza rages on, May 2021. Source: Screenshot.
Republish this article
1002 WORDS
Spread the word.
Help JNS grow!
Share now:

(May 19, 2021 / JNS) The Anti-Defamation League is offering a $5,000 reward for information leading to the arrest of men who assaulted patrons at a Los Angeles restaurant on Tuesday night in what is being looked at as a hate crime.

“We are outraged over reports of this anti-Semitic assault and thank the Los Angeles Police Department for investigating the incident as a potential hate crime,” said ADL Los Angeles regional director Jeffrey I. Abrams. “These acts of hate have no place in our community, and we hope this reward will bring about information that will lead to an arrest or arrests and the prosecution of these hate crimes to the fullest extent of the law.”

Throughout the day on Wednesday, condemnation came swiftly from local politicians and Jewish groups as a video of the assault made its way around social media and onto local news broadcasts. It was just one of several incidents that have occurred in recent days in the Los Angeles area that appeared to be targeting Jews.

Tweeting on Wednesday, L.A. Mayor Eric Garcetti said, “We as a city condemn last night’s organized, anti-Semitic attack. Jewish Angelenos, like all residents, should always feel safe in our city. @LAPDHQ is investigating this as a hate crime, and we will respond with the full force of the law.

“There is simply no place for anti-Semitism, discrimination or prejudice of any kind in Los Angeles,” the mayor continued. “And we will never tolerate bigotry and violence in our communities.”

The incident at the restaurant began on Tuesday night, after several cars with passengers waving Palestinian flags, and yelling “Israel kills children and women every day” and “Free Palestine,” drove past outdoor diners. In response, at least one of the diners yelled an explicative back to the activists, who threw something at the patrons. A number of diners ran into the restaurant while some of the Palestinian supporters reportedly jumped out of their cars, asked if anyone was Jewish and began pummeling those who responded in the affirmative.

“The Israeli-American Council is deeply concerned by a reported anti-Semitic attack at a West Hollywood restaurant, where a gang of Palestinian protesters asked customers if any Jews were present,” said Shoham Nicolet, its co-founder and CEO. “According to the report, when two men identified themselves as Jewish, the gang proceeded to beat them up. We condemn this hate crime in the strongest possible terms and urge authorities to find and prosecute those responsible to the fullest extent of the law.”

That sentiment was echoed by Liora Rez, executive director of StopAntisemitism.org, who told JNS that “the attack on Jewish diners is just another example of anti-Israeli hatred manifesting into clear anti-Semitism. We demand the attackers be found, arrested and charged to the full extent of the law.”

Also weighing was Israeli Counsel General to Los Angeles Hillel Newman, who posted on Twitter: “We should all come together in condemning the horrendous attacks by pro-Palestinian demonstrators against Jews in #LosAngeles! The indiscriminate attacks against Jews in #Israel is now continuing in L.A.”

Rep. Ted Lieu (D-Calif.), whose district includes the site of the alleged attack and is co-chair of the House Bipartisan Task Force for Combating Antisemitism, issued a statement that read: “I’m appalled by what appears to be an anti-Semitic attack at a Beverly Grove restaurant last night. The reports and videos of what happened are disturbing and distressing. Everyone in our community should feel safe and respected. No matter one’s political views, we can never condone hate crimes and hate incidents.”

Local community leaders are also looking into what L.A. City Councilman Paul Koretz described as an attempt by “two drivers to run over a Jewish man who had to flee for his life.” That incident, which happened about two miles away from the restaurant, was also caught on video and showed a car adorned with a Palestinian flag chasing a man through a parking lot.

“We will never allow for anyone to strike fear into our hearts because we are Jews,” he said. “We are not going to allow the violence in the Middle East to spill out onto the streets of Los Angeles. Everyone is entitled to express their opinion, but never through violence. Pro-Palestinian protesters cannot be allowed to viciously assault random people on the street because they happen to look or be Jewish.

“We will investigate these incidents, identify the perpetrators and bring them to justice,” continued Koretz. “We are not going to allow this to happen to my constituents in Council District 5 on my watch.”

In addition to these two incidents in Los Angeles, police are also investigating vandalism at a kosher eatery in the San Fernando Valley.

‘No one in Los Angeles started this conflict’

According to Rabbi Abraham Cooper, associate dean and director of global social action for the Simon Wiesenthal Center in Los Angeles, such attacks can’t be seen in isolation but as part of a larger spate of anti-Jew violence worldwide.

“Los Angeles is the second city for almost every national and ethnic group in the world. That means wherever there is a flashpoint around the world, someone feels it intensely. That is doubly true about Gaza for both Jews and Palestinians. With social media lit up with anti-Israel and blatant Jew-hatred 24/7, there is reason to be concerned,” he said in response to a request for comment from JNS. “We have seen what has happened in Toronto, Montreal, the United Kingdom, France and Germany; the anti-Semitic chants, the violence, even targeting of Jewish institutions.

“We need local leaders everywhere to step up and defend against any violence, but also to establish lines of communication with other community leaders,” continued Cooper. “No one in Williamsburg, N.Y., Golders Green [in] London or Los Angeles started this conflict, and no one has the power to impact on events in the Holy Land, but that hasn’t stopped the hate threats and violence from proliferating in too many places.”