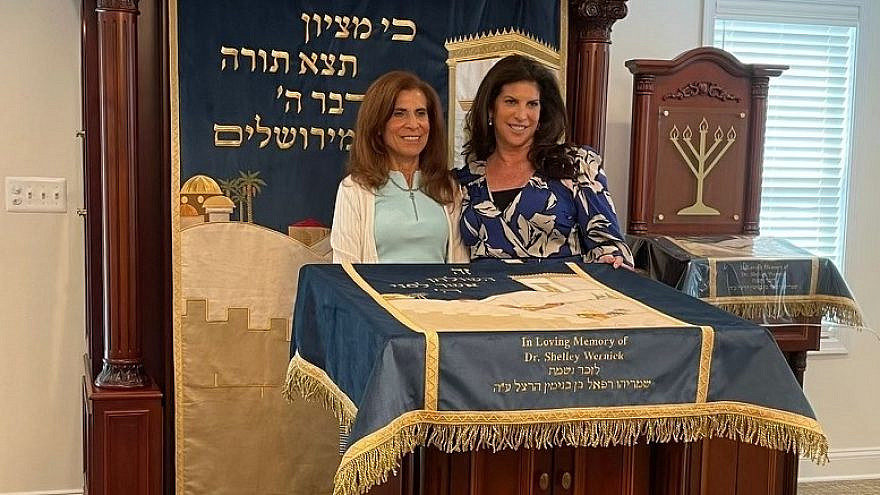 Political fundraiser Lisa Spies (right) posing for photos with her mother, Susan Wernick (left), at a private dedication event on Father's Day in front of the donations—an ark, bimah, amud—the cantor's lectern—and parochet, that she and her husband, attorney Charlie Spies made in honor of her late father, Dr. Shelley Wernick, to the Chabad Lubavitch of Alexandria-Arlington. Photo by Daniel Perez.
Republish this article
741 WORDS
Spread the word.
Help JNS grow!
Share now:

(June 24, 2021 / JNS) About 50 friends and family members of political fundraiser Lisa Spies joined on Sunday, Father’s Day, for a private brunch to dedicate donations that she and her husband, attorney Charlie Spies, made to the Chabad Lubavitch Center of Alexandria-Arlington, Va., in honor of her late father, Dr. Shelley Wernick.

A small klezmer band serenaded the guests of mostly Republican friends who had remained in town for the holiday, along with family who flew in from Los Angeles and Florida, as they mingled under a tent in the yard of the new Chabad location.

“Today is a very special day as we take the time to dedicate important components that are needed to be able to call a place not only a center but also a shul, a synagogue,” Rabbi Mordechai Newman, the center’s director, said in brief remarks standing behind one of the actual donations—a rabbi’s podium with the Chabad center’s logo emblazoned on a glass plaque in front.

Other items, Newman told the guests, included the synagogue’s ark with a built-in fireproof safe to protect the Torah scrolls, the bimah, the amud (cantor’s lectern) and the parochet—the cloth that covers the ark and bimah—that was made in Israel and embroidered with Wernick’s name. 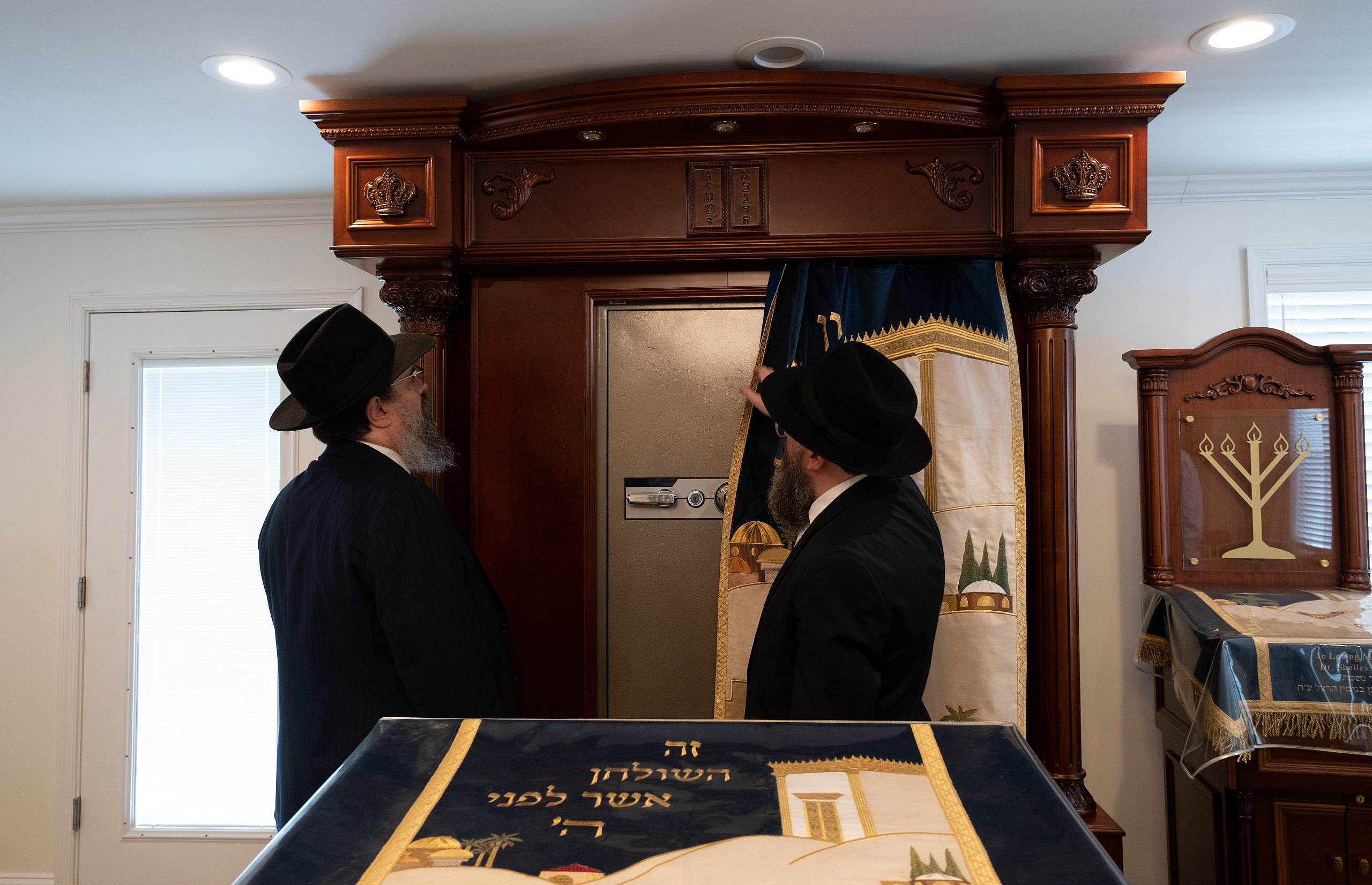 Dedicated items to grow along with the congregation

The path to Sunday’s celebration began approximately two years ago, when Spies and her husband temporarily moved to Alexandria, Va., and celebrated Yom Kippur at a Courtyard Marriott where Newman regularly held High Holiday services.

At that service, Newman announced that Chabad Center of Alexandria-Arlington had purchased a new building in the Clarendon neighborhood of Arlington for its burgeoning congregation. Spies thought it would be an opportunity to do something on behalf of her late father—a prominent neurosurgeon in Milwaukee who died in 1997, when she was in her 20s. She noted that she still gets calls from former patients or family of patients wanting to express their gratitude for her father’s work.

“I’ll get calls from people saying, ‘I found your name online. I want you to know that I’m alive today because of your father,’ or my daughter is alive or my son is alive, or something like that,” recounted Spies.

While her father already had a room named after him at a Milwaukee hospital, Spies said she wanted something within the Jewish religion—something that would remain with the Chabad center as it grew. 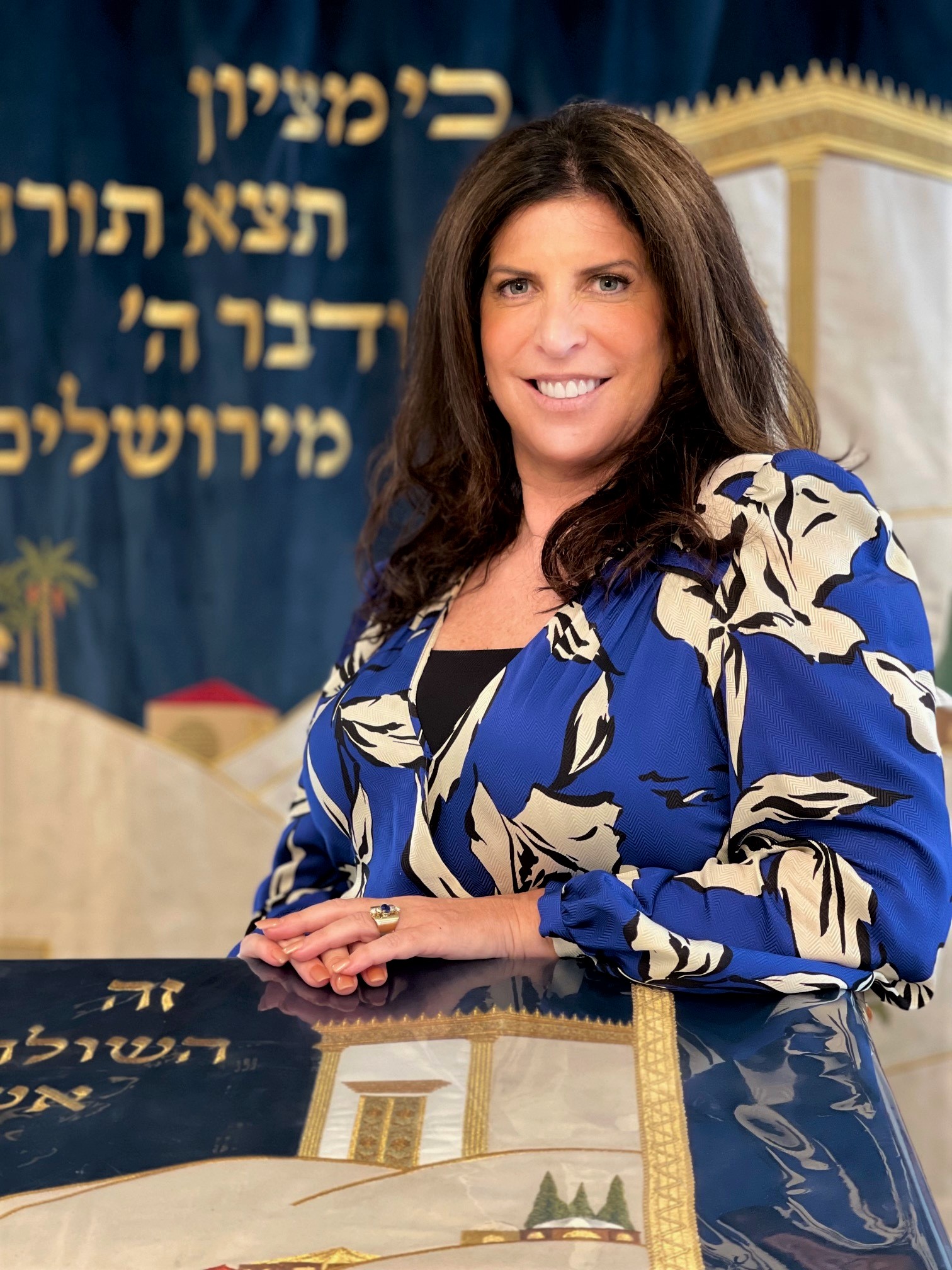 Lisa Spies poses between the bimah and ark she and her husband, attorney Charlie Spies donated to Chabad Lubavitch of Alexandria-Arlington in honor of her late father, Dr. Shelley Wernick. Photo by Daniel Mahdavian.

From her meeting with the rabbi at the hotel two years ago, Spies already knew she wanted to host a small dedication ceremony to commemorate the donations at the end of the process.

Newman said “they wanted to have this event to be able to bring her family, especially her mother, because this was all dedicated in memory of her father, and she felt that this was an appropriate way of showing them these dedications. And I can tell you that I saw her mother’s reaction—she was very, very moved by the fact that all these artifacts were dedicated in memory of her husband. I saw that it meant so much to her that her daughter was taking the time, the effort and the money to remember her father in such a way.”

While the area already has a sizable Jewish community, Spies said she hopes to see it continue to flourish, establishing more businesses like kosher delis.

In his address to the attendees, Newman expressed appreciation to Rabbi Sholom Deitsch, regional director of Chabad Lubavitch of Northern Virginia.

Newman and his wife, Yehudis, started serving the Alexandria-Arlington area in 2001. The rabbi initially held prayer services in the lower level of their home and holiday services out of the rented ballroom where he met Spies.

In 2005, the Newmans opened a Chabad center at Bailey’s Crossroads, where Alexandria, Arlington and Falls Church meet.

There, they operated a Hebrew school and taught classes until purchasing the Clarendon location in 2018 and embarking on extensive renovations. The new site has yet to host a grand opening but has already held outdoor services, particularly in light of the coronavirus pandemic.