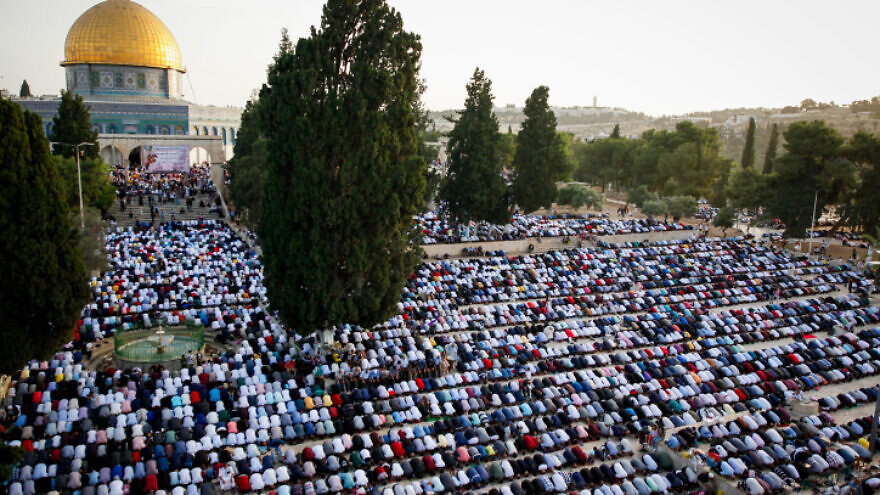 Muslims pray in front of the Dome of the Rock at the Al-Aqsa Mosque in Jerusalem during the Muslim holiday of Eid al-Fitr, marking then end of the month of Ramadan, June 5, 2019. Photo by Sliman Khader/Flash90.
Spread the word.
Help JNS grow!
Share now:

(April 8, 2020 / Israel Hayom) Israeli officials on Tuesday expressed concern that the Muslim holy month of Ramadan, which hundreds of millions of Muslims worldwide will mark starting on April 24, will cause a flare-up of coronavirus (COVID-19) infections.

Israeli authorities have made sure to make information and every form of assistance available to the Arab sector, but compliance with the Ministry of Health’s prevention directives, especially with respect to social distancing, has been slow. As of Tuesday, the number of confirmed coronavirus cases in Israel was 9,248. Sixty-five Israelis have died from COVID-19, the disease caused by the SARS-CoV-2 virus, and 770 have recovered from it.

Israeli Health Ministry officials have expressed concerns that the considerable efforts Israel has invested to “flatten the curve” of infections will be severely compromised if Ramadan customs are observed as usual during the pandemic. Large gatherings for prayer, and particularly family gatherings for the breaking of the daily Ramadan fast, are a key part of Muslim tradition during the holiday, as is the custom of visiting the elderly—a group particularly vulnerable to the virus.

A senior Arab-Israeli official told Israel Hayom that it was only in recent days that the Health Ministry began to consult with senior officials in the sector about how to successfully weather Ramadan with minimal impact on religious customs but maximum compliance with public health directives. Joint Arab List Knesset members were also weighing in on the issue, said the official, who added that there is a consensus about the need for a comprehensive information campaign.

Still, at this time, no government plan has been devised to address the challenge that Ramadan poses with respect to the pandemic.

“What we’re seeing in Bnei Brak is nothing compared to what can happen in the Arab sector during Ramadan,” warned the official, referring to the ultra-Orthodox city in central Israel under military-enforced quarantine. The measure proved necessary after the city’s residents refused to adhere to Health Ministry directives, and the community turned into a coronavirus hotspot.

Ministry officials said this week that at least 75,000 people of the 200,000 who reside in Bnei Brak could be infected.

Many European and Arab countries share similar concerns, fearing that the Muslim public will flout social-distancing directives, which would inevitably lead to higher morbidity and mortality rates.

Some Arab media outlets have called on senior Muslim clerics to issue edicts prohibiting mass prayer services in mosques and scaling back any Ramadan-related events.