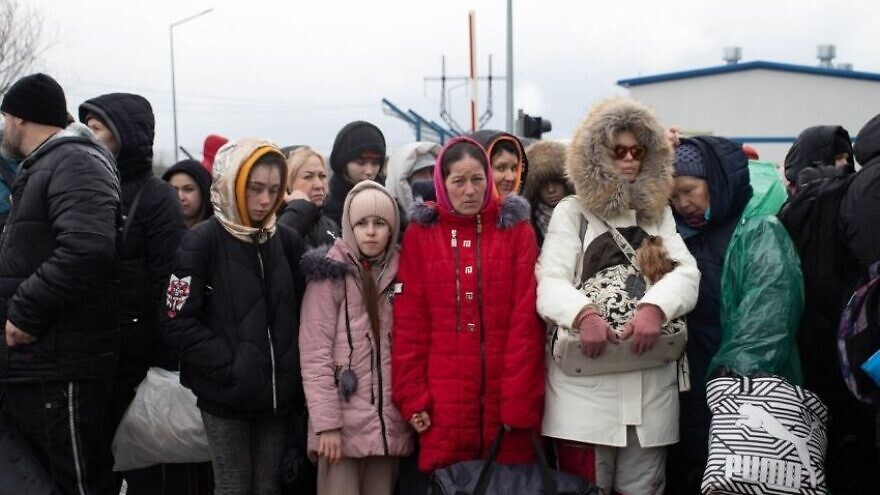 (March 4, 2022 / JNS) PALANCA, MOLDOVA – The lead gray skies suited the grim events on the ground as thousands of Ukrainian refugees streamed across Palanca, a sleepy border outpost in Moldova, as Russian forces stepped up attacks in southern Ukraine on Thursday.

Heavy snow followed by freezing rain added to the refugees’ misery as they pushed down a narrow, mud-lined road toward safety, suitcases trundling behind them, babies in tow and, often, loved ones left behind. The range of refugees was extraordinary, from Indian medical students to Odessan opera singers. As dusk gathered, a group of 140 Odessan Jews appeared, their rescue organized by the American Jewish Joint Distribution Committee (JDC).

On hand to offer assistance were members of the International Fellowship of Christians and Jews (IFCJ), an American-based charity whose contributions have helped bolster numerous Jewish groups involved in rescue and Aliyah.

Benny Hadad, IFCJ’s director of Aliyah and absorption, told JNS, “When events in Ukraine started heating up, we understood that people would go mainly to Moldova or Poland. So, we and The Jewish Agency [for Israel] decided to divide the work between us. The Agency took care of Poland. We took Moldova.”

Haddad said the IFCJ takes members of the Jewish community from the border into Moldova’s capital of Chisinau. “We find homes to put them up and have rented a space to house 240. It looks to me like we’ll need to rent another place now,” he said. 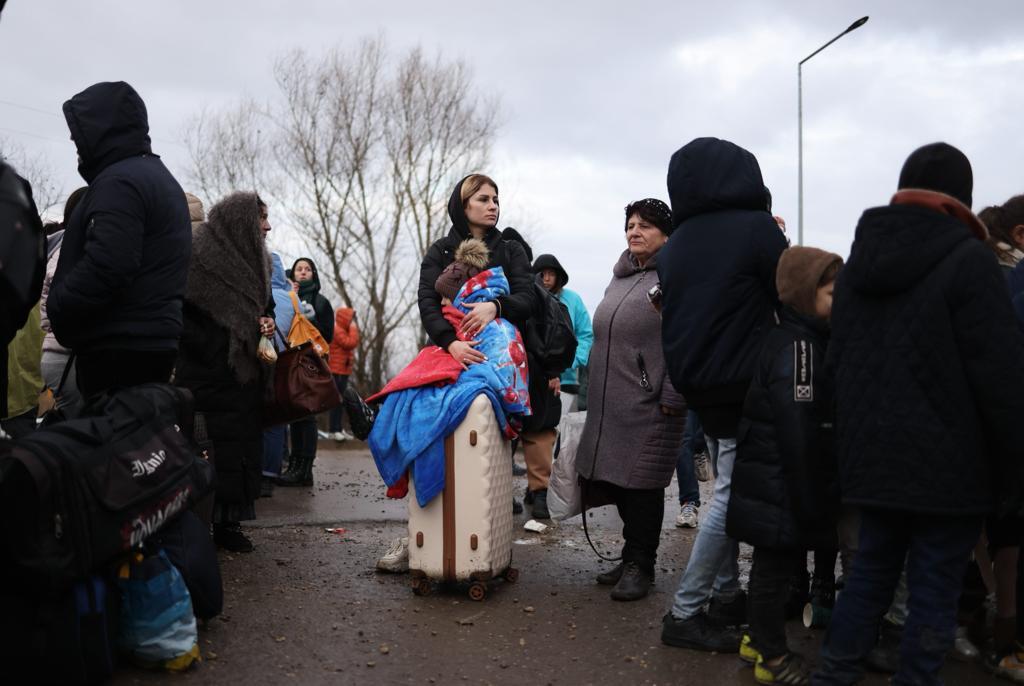 A Ukrainian woman and a child waiting at a refugee center. Credit: Avishag Shaar Yashuv.

Despite his 30 years of experience, Haddad said he has never seen anything like this. “I don’t believe what I’m seeing. I was in this place a month ago on a routine visit from Odessa to Chisinau. Everything was pastoral and quiet, and suddenly it looks like a world war.”

The Jewish group hailed from the Ukrainian city of Odessa, about 35 miles away. Members of the group told JNS they feared for the future and worried about family still in the country.

Yana Kotlievich, an American citizen who left Ukraine decades ago, said this was the second time she found herself a refugee. Nearby, her sister, Angela, shivering in the cold, tears rolling down her face, stood with her two daughters and a grandchild. Yana explained that her sister’s husband had stayed behind in Odessa to fight the Russians.

Kotlievich, who had lived in San Francisco for 30 years, had come to Odessa a month ago to help her sick brother. Her brother, who had made it through the worst of his illness but was still too unwell to travel, insisted she leave. Yana said she plans to return to the U.S. She is unsure if she will be able to bring her sister and family, who are not American citizens. 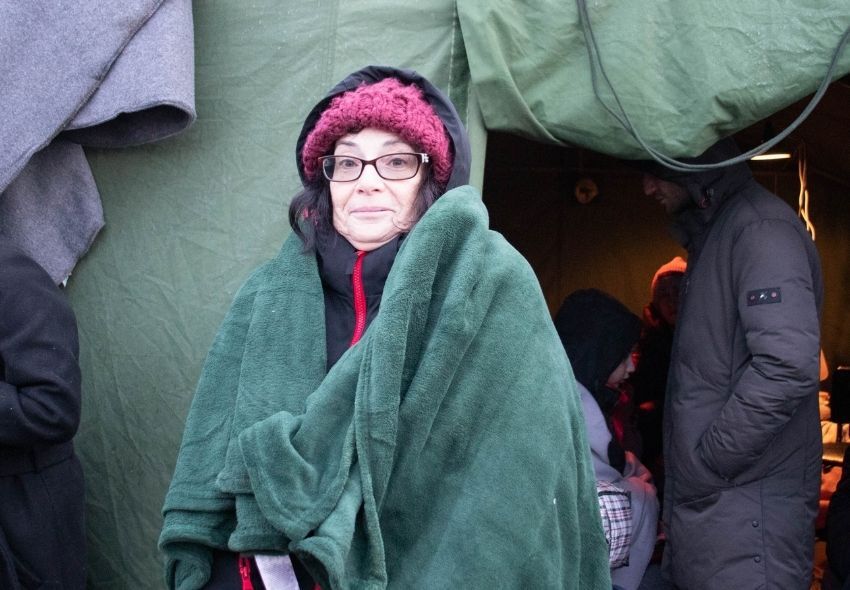 Anna Sydorova, 22, left behind her widowed mother and brother in Odessa. “My mom couldn’t leave because of grandma, who is 80. It’s very hard for her. She has a lot of diseases,” she told JNS. Sydorova said she had been volunteering in Odessa, helping make nets for tanks, and bringing food to soldiers. “My mom, she was literally begging me to go. If anything happens to them, I will blame myself.”

Sydorova’s brother, who lives in Israel and had returned to Odessa a week before the war began, decided to remain with their mom. “He had come back from Israel because he wanted to rest,” she said, noting the irony.

Though none of the Jewish refugees JNS met spoke of returning to Odessa, neither did they have firm plans. Sydorova was debating whether to go to Europe or Israel, where she had lived before. “The only thing I know for sure is that I’m going to Moldova, but after that I don’t know where I will go. I wanted to explore the world and travel but not like a refugee,” she said.

Natalia Baranovskaya did have one firm plan — to make Aliyah. She had arrived at the border with her mother and one-and-a-half year-old daughter. “I don’t understand how this can happen, now, in our times. It’s terrible. We came here just because we have a little baby,” she said. 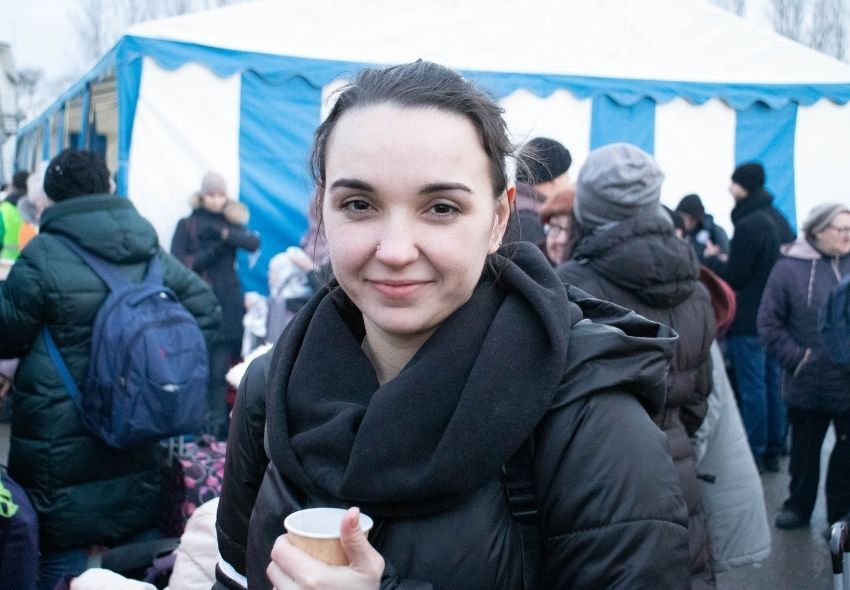 Her husband remained behind. He’s serving in the army and stationed in Odessa. “He said we must leave,” she told JNS. Baranovskaya also has a brother in the Ukraine army.

Baranovskaya studied at a Chabad high school in Odessa. She has friends from school who already live in Israel. It was through them that she found out about the plan to evacuate Jews from the city. The group met at a train station, where they boarded buses and made the trip to Palanca, which took three hours due to the convoy of vehicles making its way to the Moldovan border point (the trip is normally an hour). After another two hours waiting at the crossing, they passed into Moldova.

Though shivering in the cold waiting for a bus into Chisinau, Baranovskaya wasn’t complaining. “The road was good,” she said, staying upbeat. Her main concern is for her husband and brother, and her mother, who had no passport.