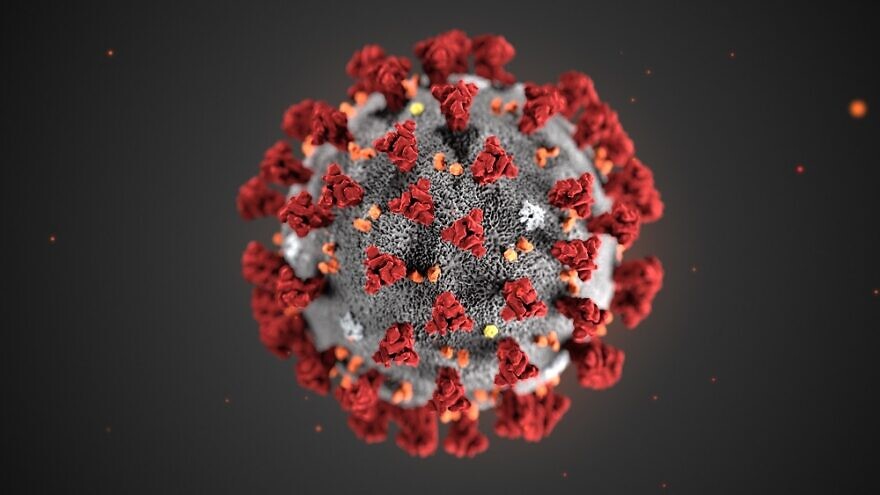 (June 11, 2020 / JNS) Far-right anti-Semites have been active online in spreading coronavirus conspiracies, according to a new report by the watchdog Canary Mission.

Since the 2017 Unite the Right rally in Charlottesville, Va., which was marked by violence between far-right parties and protesters that led to the death of 32-year-old Heather Heyer after a 20-year-old man from Ohio rammed into a crowd of people with his car, the extreme right, including 26 white-supremacist and far-right activists highlighted in the report, has utilized alternative social-media platforms since traditional ones have cracked down on their accounts.

According to the report, 73 percent of the 26 far-right activists profiled blame a so-called “Jewish controlled government” for exploiting the pandemic to serve Jewish interests.

Examples of alternative social-media accounts include, but aren’t limited to, Gab, BitChute, vk and DLive. According to the Simon Wiesenthal Center’s recent digital terrorism and hate report card, those first three sites have failed to combat bigotry on their platforms (SWC’s report card did not mention DLive).

Additionally, Telegram has risen in usage for the same purpose, according to the Canary Mission report.

Far-right activists also use podcasts to promote anti-Semitic and other bigotry surrounding the coronavirus pandemic, according to the report, which mentioned, “While it has become harder for them to host their podcasts on social media, many have widened their reach through their own websites.” 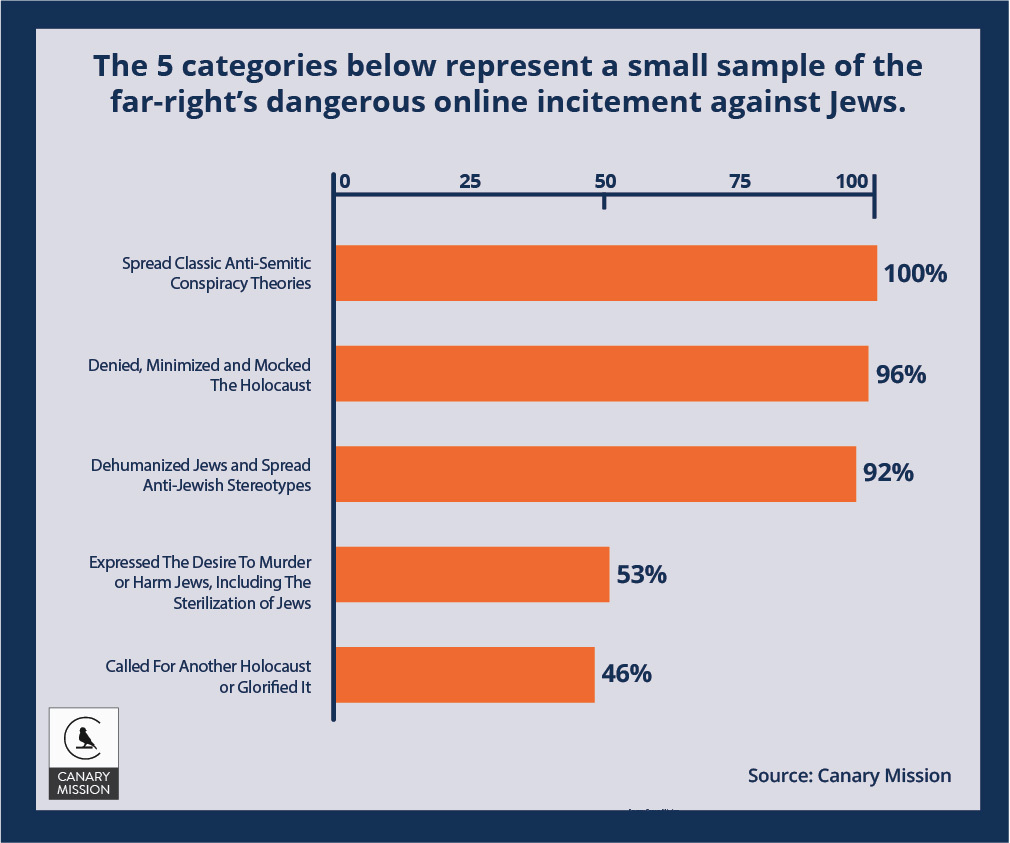 The far-right individuals mentioned in the report include Adam Green, who said, “Rothschild stepped down last year from his Rothschild investment company, as well. Are they trying to get out? Insider trading? …They didn’t wanna be responsible for this big collapse they knew, that was planned. I’ve heard the term ‘Plan-demic.’ ”

The Rothschilds are an iconic Jewish philanthropic family from the United Kingdom that has been a common target of anti-Semitic conspiracies.

Another far-right activist mentioned in the report, Lee Rogers, said, “In other words, we have to roll out this intrusive surveillance technology on to your smartphones so government lockdowns can be lifted. That’s what they’re really implying. These large Silicon Valley tech companies are nothing more than extensions of this evil ZOG [Zionist Occupation Government] beast system.” 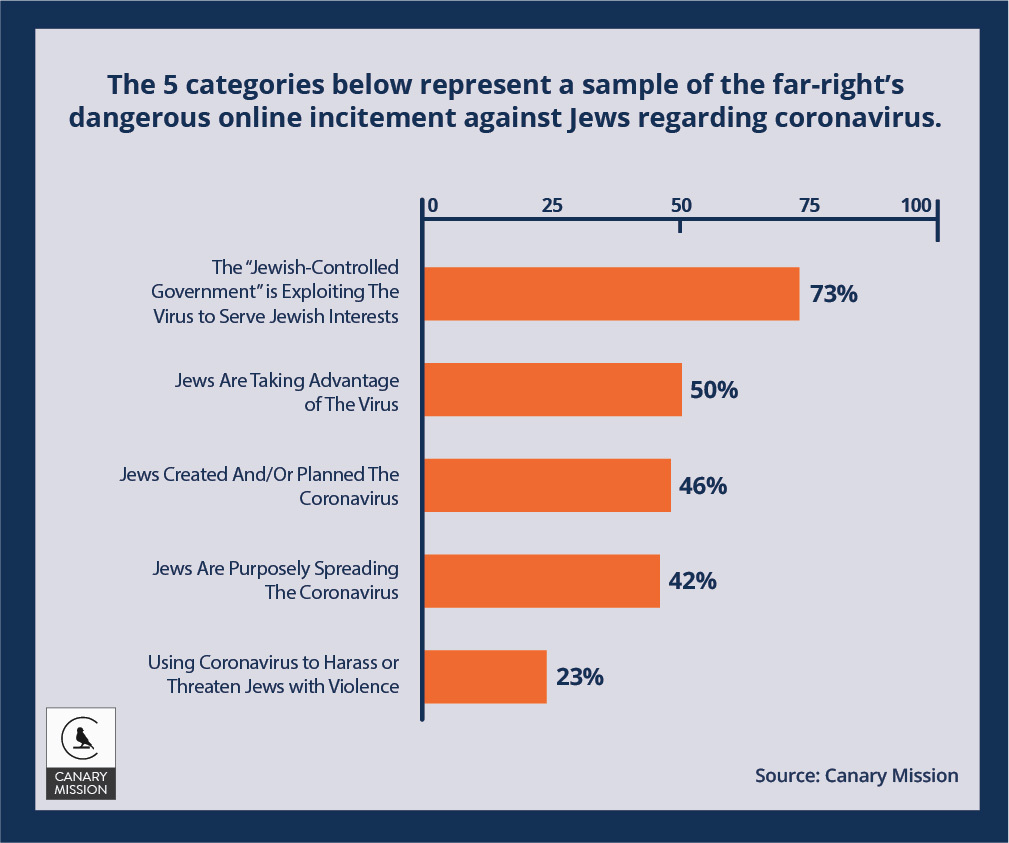 Finally, the report highlights anti-Semitism by far-right activists amid the backlash over the killing of George Floyd, 46, who died on May 25 in the custody of Minneapolis police.

Andrew Anglin, editor of the far-right website The Daily Stormer, wrote that Jews are to blame for the riots that have occurred in response to Floyd’s death.

Anglin wrote that “this is what the Jews want to do: they want to implant everyone with computer chips and run a world government out of Jerusalem where they do satanic sacrifices at their temple they’re going to build.”

Rogers accused Jews of funding the protests in response to Floyd’s murder and slammed former U.S. National Security Advisor Susan Rice: “No Susan, the riots are funded by wealthy Jews like George Soros and are being carried out by anti-fascist terrorist groups who are agitating blacks to go ape.”… “I do know one thing that is most definitely not a conspiracy theory, and that’s the fact that Susan Rice is an uppity, stupid a**n*****. That is a fact and not a conspiracy theory. F*** you Susan you ugly poop-skinned piece of s***.”

Rogers also wrote that Jews and African-Americans should “just f*** off to Israel and enjoy your Jewish supremacist state. You can take your beloved colored pets with you too.”