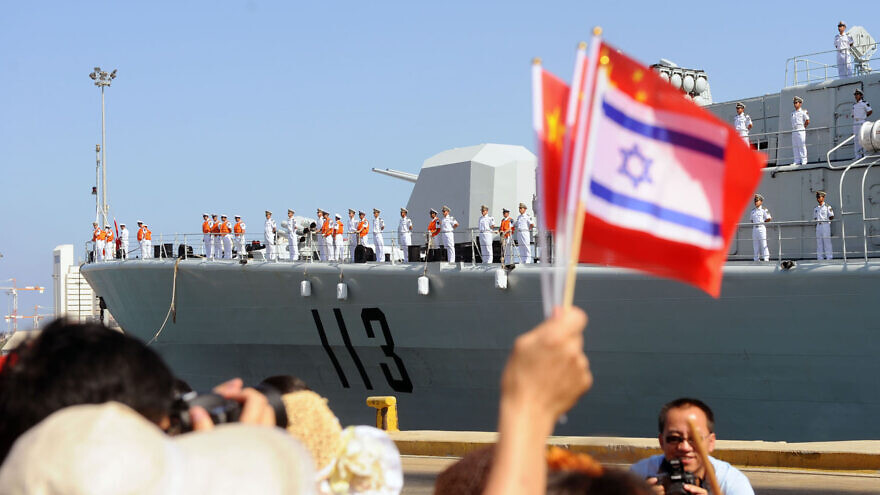 The Israel Navy congratulates the Chinese Navy on docking at the Haifa port. On Aug. 13, 2012, the Chinese vessels arrived at Israel in order to celebrate 20 years of cooperation between the Israel Navy and the Chinese Navy. RADM Yang Jun-Fei was welcomed by the Haifa base commander, Brig. Gen. Eli Sharvit, upon his docking. Credit: Wikimedia Commons.
Spread the word.
Help JNS grow!
Share now:

(May 19, 2020 / JNS) The United States has been scrutinizing Israeli academic ties with China, reported Bloomberg on Monday, citing two sources familiar with the matter.

This development is part of the Trump administration’s efforts to have Israel reduce its ties with China, in addition to America trying to get universities to separate itself from Chinese influence and espionage.

Part of the probing includes technology research and development, one of the sources told Bloomberg, adding that although there has been no talk of possible incentives or penalties for Israel to wean itself off of Chinese influence, the Jewish state cannot ignore that the United States is its top benefactor.

A spokesperson for the U.S embassy in Israel and an Israeli government spokesperson declined to comment to Bloomberg.

While the Israel-China relationship has been under fire for some time, it has been on the forefront amid the coronavirus pandemic, which is believed to have originated in Wuhan, China. It was an issue raised during U.S. Secretary of State Mike Pompeo’s visit last week to Israel.

After the United States, China is Israel’s second-largest trading partner with $11.9 billion in bilateral trade annually.

“There are definitely opportunities to increase academic cooperation, but there are risks, too,” Shira Efron, a visiting fellow at Tel Aviv University’s Institute for National Security Studies, told Bloomberg. “There are the espionage, human intelligence concerns and also the issue of knowledge transfer—- both from the perspective of economic competitiveness and national security concerns.”