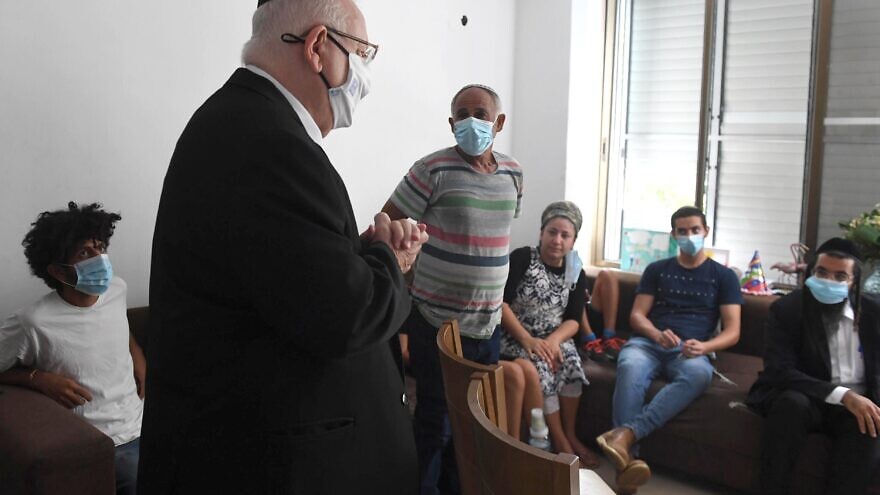 (September 1, 2020 / JNS) Israel’s President Reuven Rivlin paid a condolence call on Tuesday at the family home of Rabbi Shai Oyahon, who was killed last week in a terrorist attack at the Segula junction in Petach Tikvah.

“I came to share your deep grief and to express our pain—the pain of the whole people for a man who did so much for our society,” said Rivlin, according to the Government Press Office. “We have lived in our land for thousands of years. We held onto it and will not let go, even when our enemies try again and again to harm us.”

According to the GPO, Ohayon’s widow, mother, brothers, sisters and four young children told Rivlin about how the late rabbi “always offered a helping hand to those around him.”

Ohayon’s mother recounted that her son “took care of everyone, with modesty and great intention. He always took care of me so that I would not want for anything. If only we could be the last bereaved family.”

Oyahon’s children told the president that they had attended their schools and kindergartens that day—the start of the school year for most of the country’s students.

Ohayon, 39, was stabbed to death on Aug. 26 while on his way home from a Torah-study institution in nearby Kfar Saba. When he disembarked from his bus, a Palestinian from Nablus—reportedly suffering from a mental illness—attacked him and attempted to flee the scene, but was chased by members of the public and ultimately detained by police.

Ohayon was critically wounded and was later pronounced dead at the hospital.

Israeli Prime Minister Benjamin vowed that the attacker’s punishment would be “most severe.”

“On behalf of all the citizens of Israel, from the bottom of my heart, my condolences to the Ohayon family on the murder of the father of the family, Rabbi Shai, in a stabbing attack today in Petach Tikvah,” Netanyahu said in a statement on the day of the murder. “The heart hurts. My wife, Sara, and I embrace the family, a wife and four children left fatherless today. We will work to demolish the terrorist’s house and carry out the most severe punishment.”