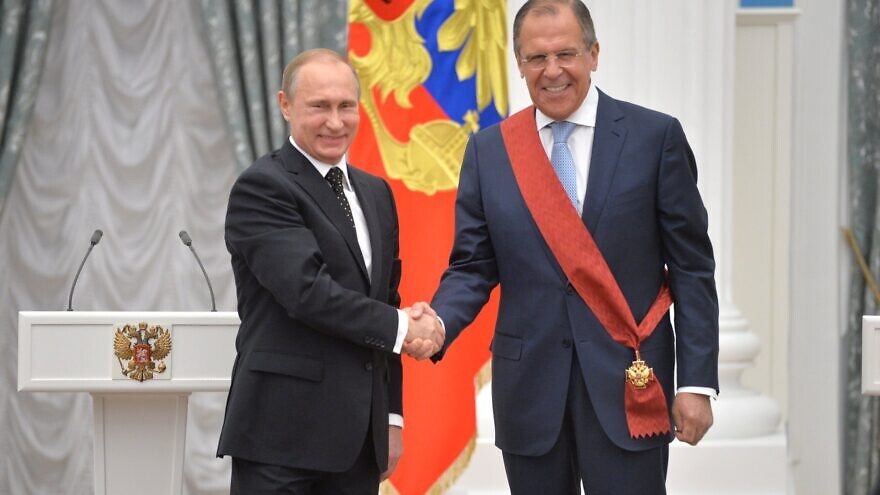 Russia's President Vladimir Putin and Foreign Minister Sergey Lavrov, as the latter is awarded the Order of Service to the Fatherland, 1st class, at the Kremlin in Moscow, May 21, 2015. Credit: Kremlin Presidential Press and Information Office via Wikimedia Commons.
Spread the word.
Help JNS grow!
Share now:

(January 18, 2023 / JNS) The West is using Ukraine as a “proxy” in the pursuit of a Nazi-like genocide, Russian Foreign Minister Sergei Lavrov said on Wednesday.

“Just like Hitler wanted a final solution to the Jewish question, now, if you read the Western politicians, not only from the Baltics or Poland but also those who are much saner, they univocally say that Russia must suffer a strategic defeat,” said Lavrov.

Lavrov said the West, and the U.S. in particular, has “the exact same goal” as the Nazis, who dubbed the extermination of 6 million Jews as the Final Solution.

“Just as Napoleon mobilized practically all of Europe against the Russian Empire, just as Hitler mobilized and captured…the majority of European countries and sent them against the Soviet Union, now the United States has organized a coalition,” Lavrov said. “Through Ukraine as a proxy, they lead the war against our country with the exact same goal: the goal of the final solution to the Russian question. Just as Hitler wanted to finally solve the Jewish question.”

Moscow’s top diplomat contended that Russia’s invasion of Ukraine in February was “our response to a hybrid war unleashed against us” by the West.

Asked by Italian media how a Nazi regime such as Russia claims exists in Ukraine could be headed by a Jewish president such as Volodymyr Zelenskyy, Lavrov responded, “So what if Zelenskyy is Jewish? Hitler had Jewish blood.”

He went on to state that “the greatest antisemites were Jews.”

In July, the U.S. State Department slammed the Russian government for continuing to liken Ukrainian leaders to Nazis and evoking the Holocaust in its war against Ukraine.

In a statement, the department cited numerous examples of the Russian government and propaganda apparatus justifying its aggression towards Ukraine by invoking World War II imagery.

Russia has long claimed that one of its goals in Ukraine is “de-Nazification,” with President Vladimir Putin calling the Ukrainian leaders a “gang of drug addicts and neo-Nazis.”

“Putin and his disinformation and propaganda apparatus exploit the historical memory of the Soviet fight against Nazi Germany to fabricate a pretext for their unprovoked brutal war against Ukraine. To serve its predatory ends, the Kremlin is exploiting the suffering and sacrifice of all those who lived through World War II and survived the Holocaust,” said the statement.

“In the process, the Kremlin is detracting from critically important global efforts to combat antisemitism and is instead propagating one of antisemitism’s most insidious forms: Holocaust distortion,” it added.