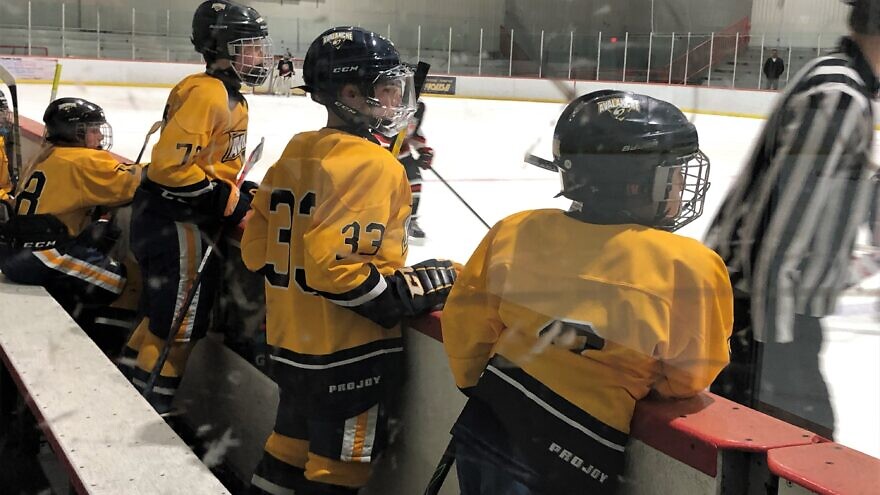 (December 17, 2021 / JNS) At 9:30 p.m. on a recent Saturday night, players from the North Jersey Avalanche hockey league finished their game and walked off Rink 3 at the Ice House in Hackensack, N.J. They were tired and a bit dejected, after losing 4-1 to the Bandits hockey team, as well as mindful that in a little less than 10 hours, they would be back on the ice for a Sunday-morning game against the Devils—at 7:30 a.m.

The players—by then, ravished—took off their helmets, masks and pads, put down their sticks, and quickly devoured slices of pizza. Kosher pizza. Helmets were replaced with kipahs, and the lone girl on the team, Elly Younger, changed from her yellow Avalanche hockey uniform into a denim skirt and a blue long-sleeve shirt.

The New Jersey Avalanche is a team of skilled skaters and stick-handlers, but it’s not your typical hockey club—the Avalanche are four Shomer Shabbat (Shabbat-observant) youth hockey teams of players ages 9 to 16.

Playing competitive hockey involves participating in four practices a week and competing in tournaments throughout the Northeast; and tournaments usually involve playing four games in a weekend. Scheduling is complicated for organizers who need to work around teams who cannot play from sundown on Friday until three stars appear 25 hours later on Saturday nights. Players and parents also have to make arrangements for kosher food, prayer services and Sabbath-friendly activities.

The idea for an observant team came about when tristate-area youth grew tired of hearing stories from their parents of their own hockey-playing childhood. The parents wanted to provide their kids with the opportunity to try the sport on their own.

According to founder Tzvi Rudman, he and several parents approached the Englewood Field Club in 2001. “The rink was accommodating,” recounts Rudman, “even though the players could not play on Shabbat and Jewish holidays.” 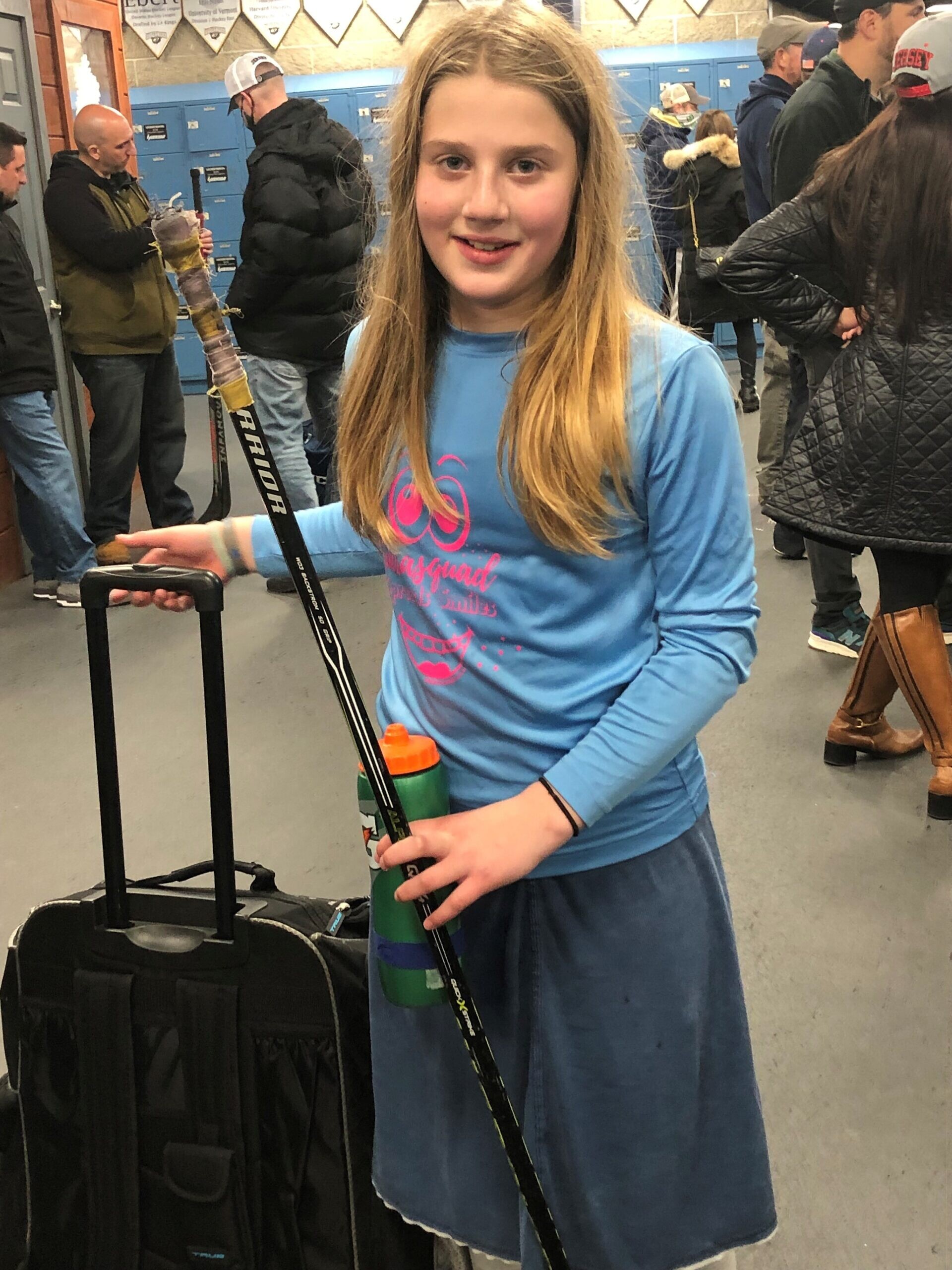 ‘It was a good start’

And so, the team played most of their games on Saturday nights. “It was a good start,” says Rudman. “But the rink was outdoors, and it was small.”

They then approached one of the premier leagues in the area with four indoor rinks. The North Jersey Avalanche is a nationally ranked hockey organization under the guidance of Daniel May, Ice House hockey director and president who has more than 40 years of experience in youth hockey.

May and the Avalanche were willing to work with and accommodate the various needs of the young players. “The biggest and hardest part was explaining how the Shabbat start times and end times changed throughout the year. At first, they didn’t believe us,” recalls Rudman playfully. “They had to look it up! This is something we always took for granted. It was one of the most fascinating things.”

For his part, May says “we knew we could make the schedule work on our end but, we were concerned about league members’ cooperation with the schedule on their end. Fast-forward to today, we now have an observant team at almost every level. It takes a lot of extra administrative work—mostly by my wife, Monica, who schedules around 1,500 games combined for all 34 Avalanche teams, but she makes it work.”

Rudman also notes that “there are no tryouts; you just have to say you want to be part of the team. That’s really nice.”

In spite of the commitment of time required for practices, games and travel, coupled with the sometimes challenging logistics of observing the Sabbath on the road, the players and parents say they could not be happier with the results.

In fact, the big news is in late October, the oldest group won its division (Under-16, AA American) in the statewide 2021-22 New Jersey Youth Hockey League.

Michael Massel, who lives in Manhattan and attends the Shefa School, enjoys being part of a team and spending time with a diverse group of friends, both on and off the ice. “You get to play a sport. It is fun to play hockey with them, and also to chill with them and play mini-hockey at the tournaments.”

He admits, however, that “it’s also a little tiring.”

While the families seem pleased with the level of hockey, they are delighted with what their children have learned about being observant Jews and members of the Jewish community. Michael’s father, Morris, reports: “Our kids can be part of a team that is high-level hockey without compromise. They can live religious lives; there’s no such thing as a Shabbat problem.”

Massel also likes the fact that players and parents spend Shabbat together at tournaments. They bring prayer books and a Torah scroll, and eat Shabbat meals together. “We are all in it together, and the memories are unbelievable!”

Aaron Younger’s daughter, Elly, is the only girl on the team.” She attends YBH yeshivah in Passaic. “She loves skating, and she loves playing with the guys.”

Melanie Sosland of Englewood, N.J., has two boys in the league. Gabriel, age 11, plays on the Peewees, and Noah, age 14, plays on the Bantam. “They saw that other Englewood kids were playing, and they wanted to play as well,” she says.

Sosland concedes that playing four times a week is a big commitment but sees the benefits that go beyond sports. “It teaches a great work ethic and how to balance schoolwork with hockey. And the tournaments are amazing—with the Torah scroll and the kosher food. They will always remember it.” 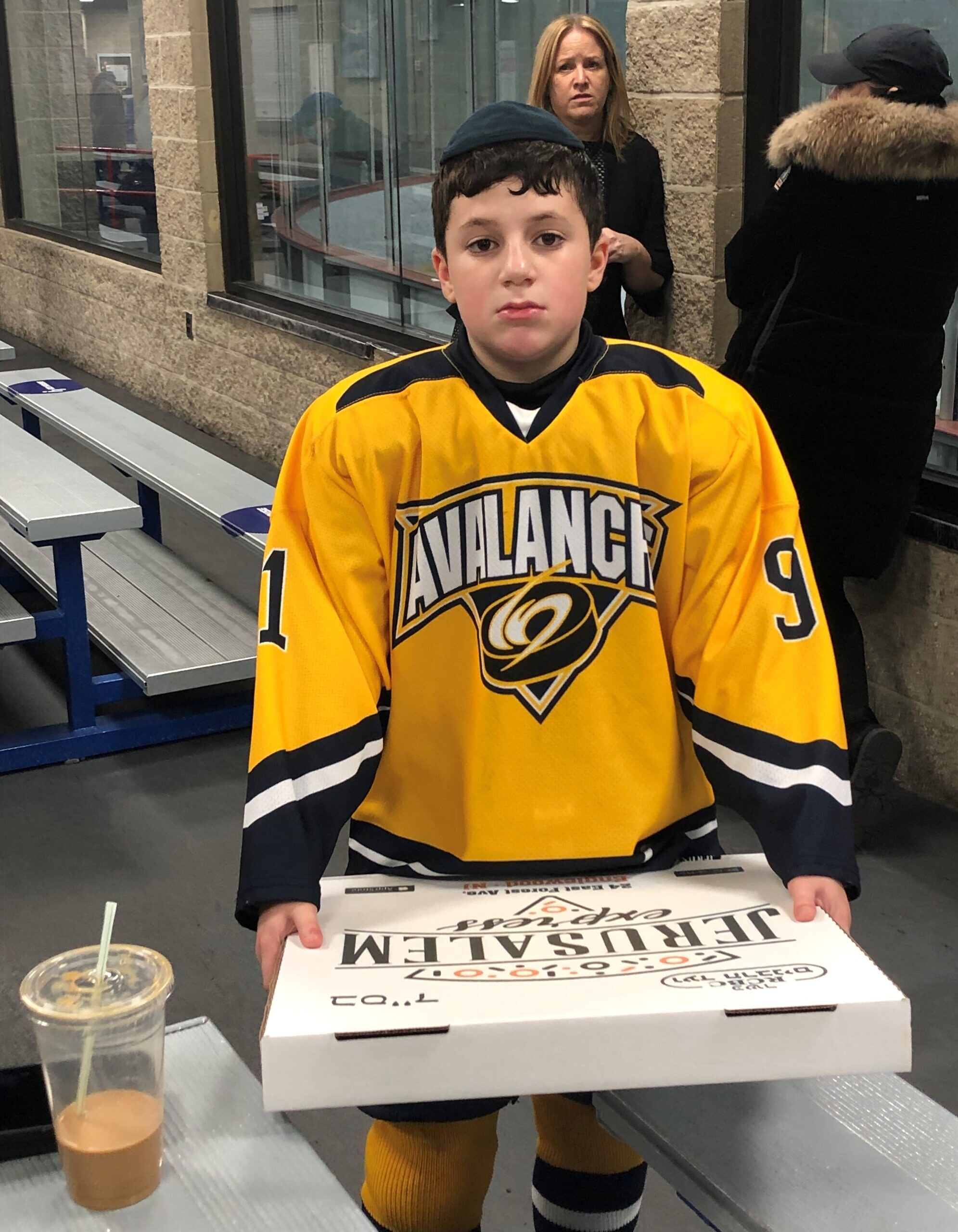 Bringing Jewish observance “on the road” teaches the players to navigate sometimes complex real-life situations. They also have opportunities to serve as ambassadors for Judaism. Michael Massel recalls an incident where “one team had Shabbat issues in Delaware a couple of years ago, and the local Chabad pitched in.”

Rudman, the organization’s founder, recalls: “Seven years ago, the other teams on the road looked at us like we were from another planet when they saw our kipahs and tzitzit. Then we kicked butt during the games! Now, they all know our teams, and we are accepted.”

He also recalls a moving incident from a tournament in Providence, R.I. “We played a team with players from Colorado and Kansas. One kid came over and said, ‘I had two firsts this weekend—I saw the ocean for the first time, and I met a Jewish person for the first time.’ ”

“There is respect out there,” acknowledges Rudman, who takes the Jewish values and menschlichkeit piece very seriously, and encourages his players to remember that. In fact, he quips: “We sometimes send out reminders that we are being judged on a higher level.”

Rick Pomerantz of Englewood looks back with pride on what the league has accomplished over the years and on what it has meant for his family. His son, Alex Pomerantz, 13, is a second-year Bantam and attends the Moriah School. His father recalls that “the first year at the Ice House, Alex was one of three frum kids who played when there wasn’t a Jewish team. He loves the game and has since the first time he put on skates at 3 years old. What it has done is given him a chance to pursue his passion with high-level coaching, all without compromising our Judaic values. I know it sounds trite, but it’s true.”

He continues, saying “the teams have won tournaments, but if you speak to the parents, the most gratifying thing is that we have a beautiful minyan every day, and the entire group will eat together. The fact that we have been on tournaments with minyans of 40 men and had catered Shabbat dinners in [places like] Hershey, Pa., is unbelievable. It’s important for the kids to see that as religious Jews, you don’t have to compromise to do what you love.”

“There is no sport like hockey,” attests Pomerantz. “That’s why everyone who plays is passionate about it. The camaraderie and bonds that are made are priceless. Alex has made friends for life.” 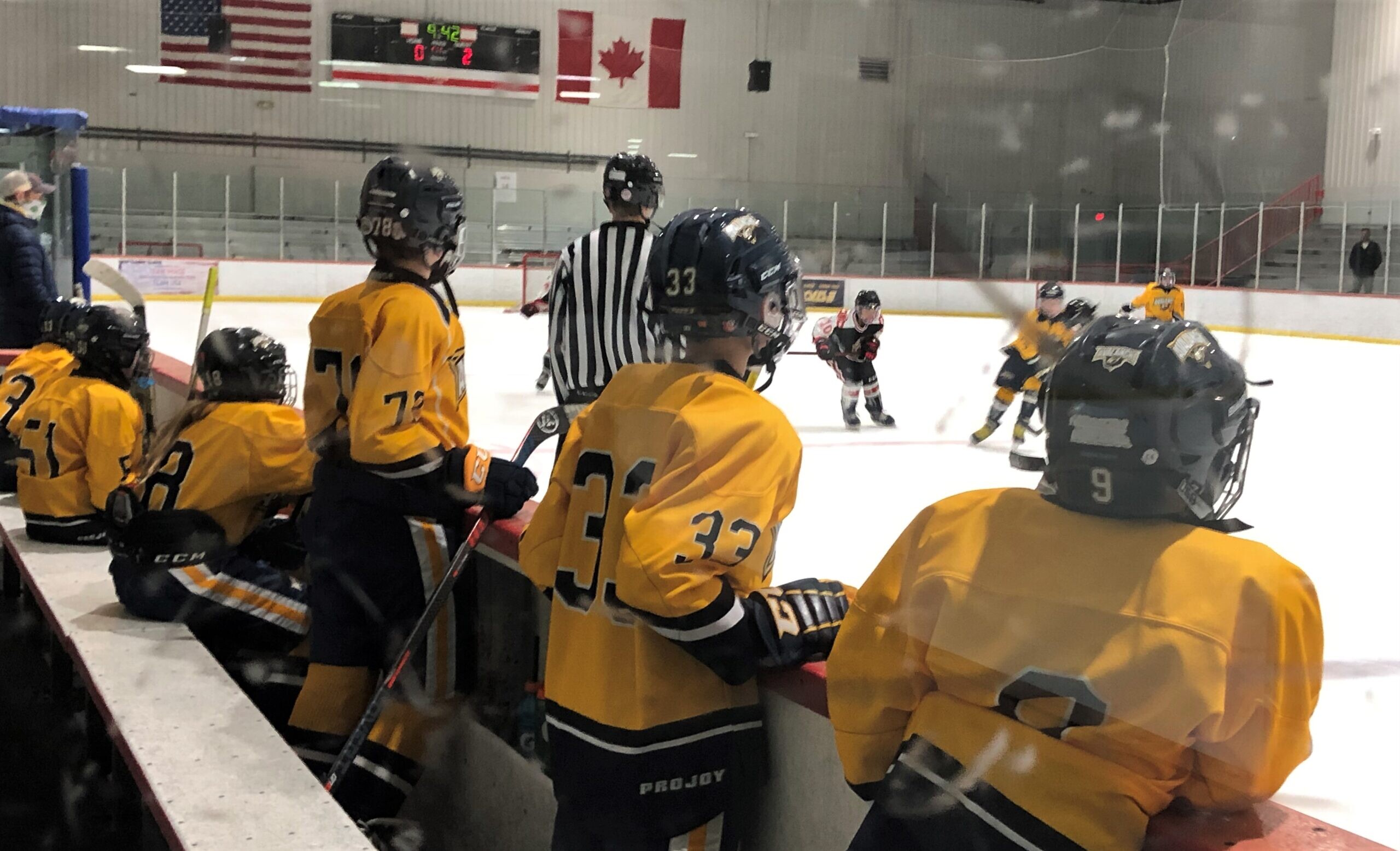 Players on the Shomer Shabbat North Jersey Avalanche hockey league. Photo by Howard Blas.
Republish this article in your newspaper or website