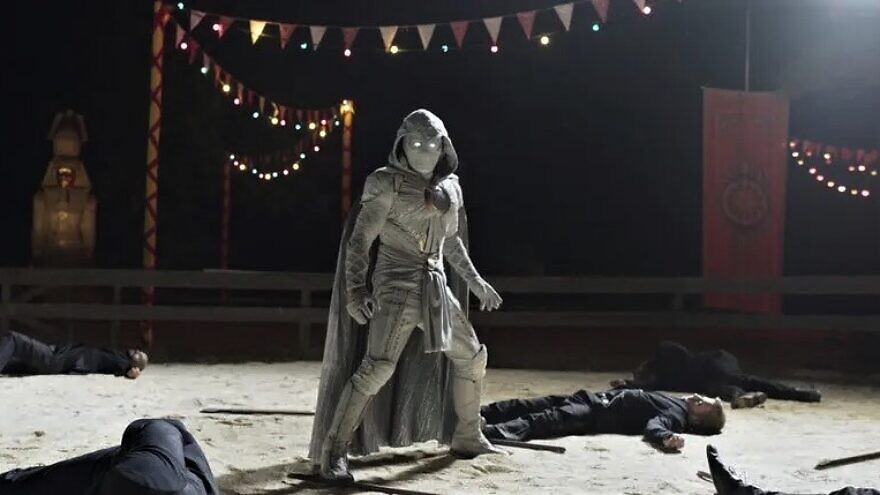 Disney’s mesmerizing series “Moon Knight” features what is believed to be the first overtly Marvel Jewish character in a major film or series in the form of alter-ego, Marc Spector.

In the fifth episode of the show on Disney+, we see Spector wearing a yarmulke while he is supposed to attend his mother’s shiva. But he can’t bring himself to go inside because she was abusive towards him, blaming him for the time he and his brother went into a cave, and his brother wound up drowning. We see actor Oscar Isaac, as Spector, throw his yarmulke on the ground and then pick it up in sorrow, almost apologetically. He is the son of a rabbi in the comic book, not that we see evidence of that in the show, though we do see other relatives wearing a tallit and a yarmulke.

“The emotional outpouring of Marc at his mother’s shiva was compelling, and his wringing of his kipah was a well-depicted externalization of deep grief,” Rabbi Menachem Creditor, a scholar in residence at UJA Federation, told JNS. “It wasn’t a question of Jewish identity, but rather of mental health and grief manifested through Jewish symbolic framing.”

Filmmaker, photographer and comic-book guru Saul Sudin pointed out that the comic-book version of  Marc Spector is decidedly more Jewish.

“In the comics, Spector’s father being a rabbi and his history with anti-Semitism have played a major role in certain stories and versions of the character,” said Sudin. “The show threw those away and we got a vaguely nebbishy, but underdeveloped, version of his father. It’s not clear what their religiosity or practice really is. I would have loved more clarity and authenticity on screen because the scenes that are overtly Jewish are shiva scenes but beyond some candlesticks and an out-of-place Chassidic man in the background, we don’t get much else.”

Comic fan Sruli Broocker said he has been obsessed with Jewish representation among superheroes for more than three decades. He thought it was an interesting take to move away Marc’s trauma from anti-Semitism and instead have it come from an abusive mother who blames him for his brother’s death.

“I don’t think we have to keep re-exploring the Holocaust,” said Broocker. “I am hoping to see a scene relating to Kabbalah because Kabbalah is about chaos and repair, and that’s certainly going on and it’s a need for the character.” 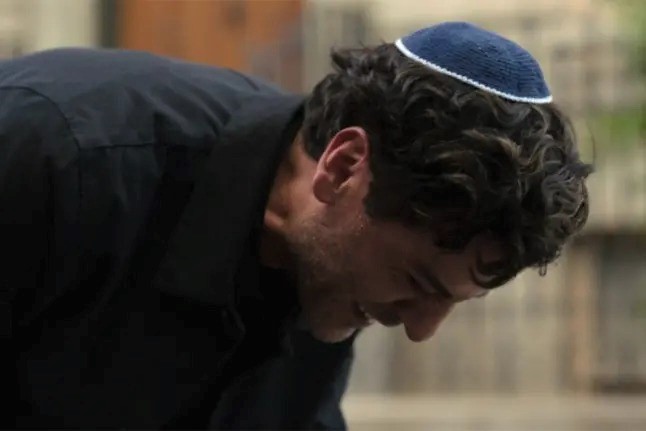 “Moon Knight” has the alter ego of Marc Spector, Steven Grant, who talks in a British accent and is not as tough as Spector, who has done the bidding of Khonshu. Oscar Isaac performs well, as does Ethan Hawke, who is creepy and charismatic as cult leader Arthur Harrow and the former avatar of Khonshu (a member of the Ennead, the Heliopolitan race of gods worshipped by the people of ancient Egypt; the God of the Moon), who is now the avatar of goddess, Ammit.

Through Ammit’s power, Harrow can touch the wrist of a person with his own tattoos, which will show scales to weigh good and evil so as to tell him whether the person will commit a sin. If that’s the case, the person immediately dies.

Khonshu is voiced by veteran actor F. Murray Abraham. Alan Zelenetz is credited with writing the Jewish origin story for Marc Spector in “Moon Knight,” and there is later a villain named Zohar in the comic book who learns Kabbalah and wants to keep all the secrets for himself.

Some fans of DC Comics—that other superhero universe—were thrilled to hear that Barry Allen, who becomes “The Flash,” would be Jewish and played by Jewish actor Ezra Miller, but were then disappointed when only one line made it into the film to allude to his Jewishness.

Arye Dworken, a pop-culture journalist who also works in advertising, said it was cool to see his religion acknowledged in a Marvel character and notes that a Muslim character will follow.

Dworken said he enjoyed “Moon Knight” but felt it might have been better as a two-hour movie. He commented that people seem to have a knee-jerk reaction to argue if the scene or series is Jewish enough. But that, he said, misses the point.

Still, he added: “I don’t know what the test is to show if something is Jewish enough, and I don’t think that should be the focus.”