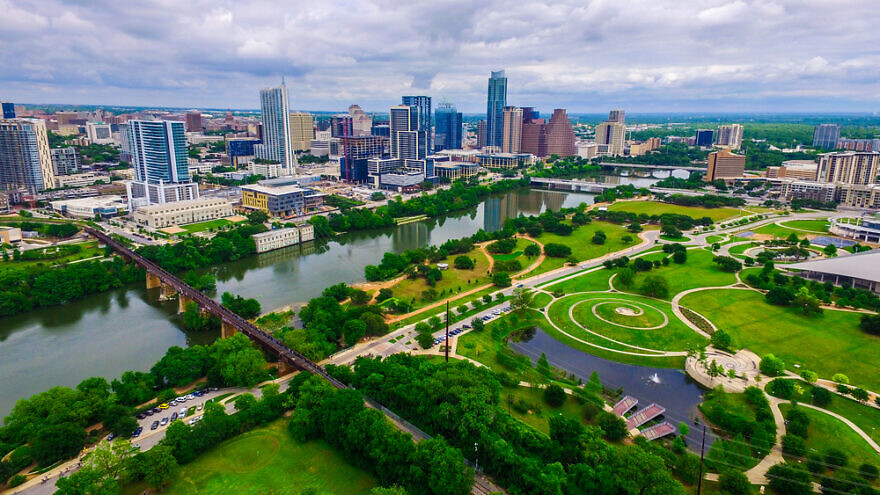 (October 25, 2021 / JNS) The Jewish community in Austin, Texas, is responding to several instances of anti-Semitism in recent days as graffiti was found outside a local high school on Friday, followed by an anti-Semitic group unfurling a banner and giving the Nazi salute on an overpass near the Jewish community center.

On Saturday afternoon, a member of the anti-Semitic Goyim Defense League stood atop a highway overpass not too far from the Dell JCC, saluted and unfurled a banner that read “Vax the Jews.”

According to the Anti-Defamation League, the Goyim Defense League “is a small network of virulently anti-Semitic provocateurs,” and their “overarching goal is to cast aspersions on Jews and spread anti-Semitic myths and conspiracy theories.”

Austin Mayor Steve Adler said on social media, “I am heartbroken to see anti-Semitic hatred in Austin, a welcoming and respectful place. Hatred of any kind has no place in our city.” He urged people who “see or hear” anti-Semitism to report it to the ADL.

In response to the incident, a letter signed by leaders of the local Jewish federation, ADL and area synagogues, said, in part, “We understand this is extremely upsetting and unsettling. We are always vigilant in monitoring anti-Semitic groups and work closely with law enforcement to share information about their activities. This group’s goal is to attract attention by being as offensive as possible.”

“The Austin Police Department is aware, has been incredibly supportive, and has been carefully monitoring and observing the situation. … We understand they may have plans to conduct additional activities in Austin and elsewhere in Texas over the coming days. Given their recent activities, we expect this would involve demonstrating in a public space where they can get attention. If you see them, interacting with them is not advised,” the letter went on to say.

Meanwhile, Austin police faced criticism on social media for a photo that showed one of its officers fist-bumping a member of the hate group.

In a statement issued on Sunday Police Chief Joseph Chacon said, “Let’s be clear. Hate and bigotry have absolutely no place in our community and certainly are not welcome in our police department. Views shared by demonstrators during a protest action over the weekend were abhorrent and do not reflect our values.

“A screen grab from the more than two-hour incident does not tell the whole story. I ask that our community not buy into the hate and images that have been taken out of context on social media,” the police chief said. “After enduring a barrage of hate speech and personal insults being hurled at them, officers who responded to the scene calmly and professionally carried out their duty to keep drivers … bystanders and protesters safe while ensuring that the incident did not escalate, and no laws were being broken.”

Also speaking out was a Jewish police officer who was at the scene.

“You’re going to read a lot of emotions about [Austin Police Department’s] responses to the incidents. I understand the frustration as much, if not more than anyone because I was there on duty. I was more of an object of their hatred because I was wearing a uniform ball cap that had the departmentally approved LGBTQ patch on it. They didn’t know I am Jewish. They also made the assumption that I was gay due to the patch,” said Officer Chip Riley in a Facebook posting on the Austin Police Association’s Facebook page.

“ … It was Shabbat. They are going around the country provoking a response. They were in San Antonino before Austin,” continued Riley. “However, we upheld our oath to protect everyone’s constitutional rights, including those of people who would likely kill me and my family if they had the power to do so.”

Prior to the weekend, on Friday, anti-Semitic graffiti was found on parking spaces and sports shed at Anderson High School, which, according to Rabbi Neil Blumofe of the nearby Congregation Agudas Achim, has a sizable Jewish student population and “is the neighborhood school for those families who live in the facility of the Dell Jewish Community Campus.”

Agudas Achim is one of several congregations located on the sprawling Dell JCC campus. It hosted a special program for teens on Shabbat to give them “a time for connection, learning, and zemirot after services,” said Blumofe, noting that a larger-than-usual number of teens joined Shabbat services over the weekend.

Speaking to JNS, the rabbi said “these acts of hate have shown our community to be resilient—as we double down on community, prayer, mitzvot and study. In addition, many supportive allies across the city have expressed their concern. As I wrote to my community Motzei Shabbat, we are united in solidarity against hatred, and we value positively expressing Judaism and our traditions.

“We are grateful for the strong alliances that we have across this city, including law enforcement, government officials, and civic and religious leaders,” he added. “We will continue to strengthen these strong bonds of friendship as we uplift and inspire our community, and as we condemn all who seek to hurt or divide us.”