Israeli security and rescue personnel at the scene of a terrorist attack on Ibn Gvirol Street in Elad, east of Tel Aviv and near the city of Petach Tikvah, on Yom Ha'azmaut, Israel's Independence Day, May 5, 2022. Photo by Jamal Awad/Flash90.
Republish this article
454 WORDS
Spread the word.
Help JNS grow!
Share now:

(May 5, 2022 / JNS) Security forces are searching for the attackers who killed three Israelis and injured at least four people, two critically, in the central Israeli city of Elad, not far from Petach Tikvah. The attack on Thursday night came as celebrations for Yom Ha’aztmaut, Israel Independence Day, were winding down.

“Unfortunately, three people who we performed CPR on have been pronounced dead,” said Moshe Sa’adon, a volunteer EMT with United Hatzalah and head of Elad Hatzalah, who was one of the first emergency-service personnel on the scene. “We also treated two people in serious condition, one person in moderate condition and a number of people lightly injured.”

Also treating patients is Magen David Adom. Director general Eli Bin tweeted: “At the moment, reports indicate six victims in serious condition. Many MDA teams are at the scene treating the victims at this moment.”

One of the victims who was killed was reported as being a man in his 40s. A witness at the scene heard shouts of Allahu Akbar during the attack, according to Israeli media.

The suspects, who attacked people in the city’s central park by Ibn Gvirol Street, were believed to be armed with an ax and perhaps a firearm. With the aid of at least one helicopter, security forces are searching the area for the assailants. Elad Mayor Yisrael Porush told residents to stay inside while security forces were operating. 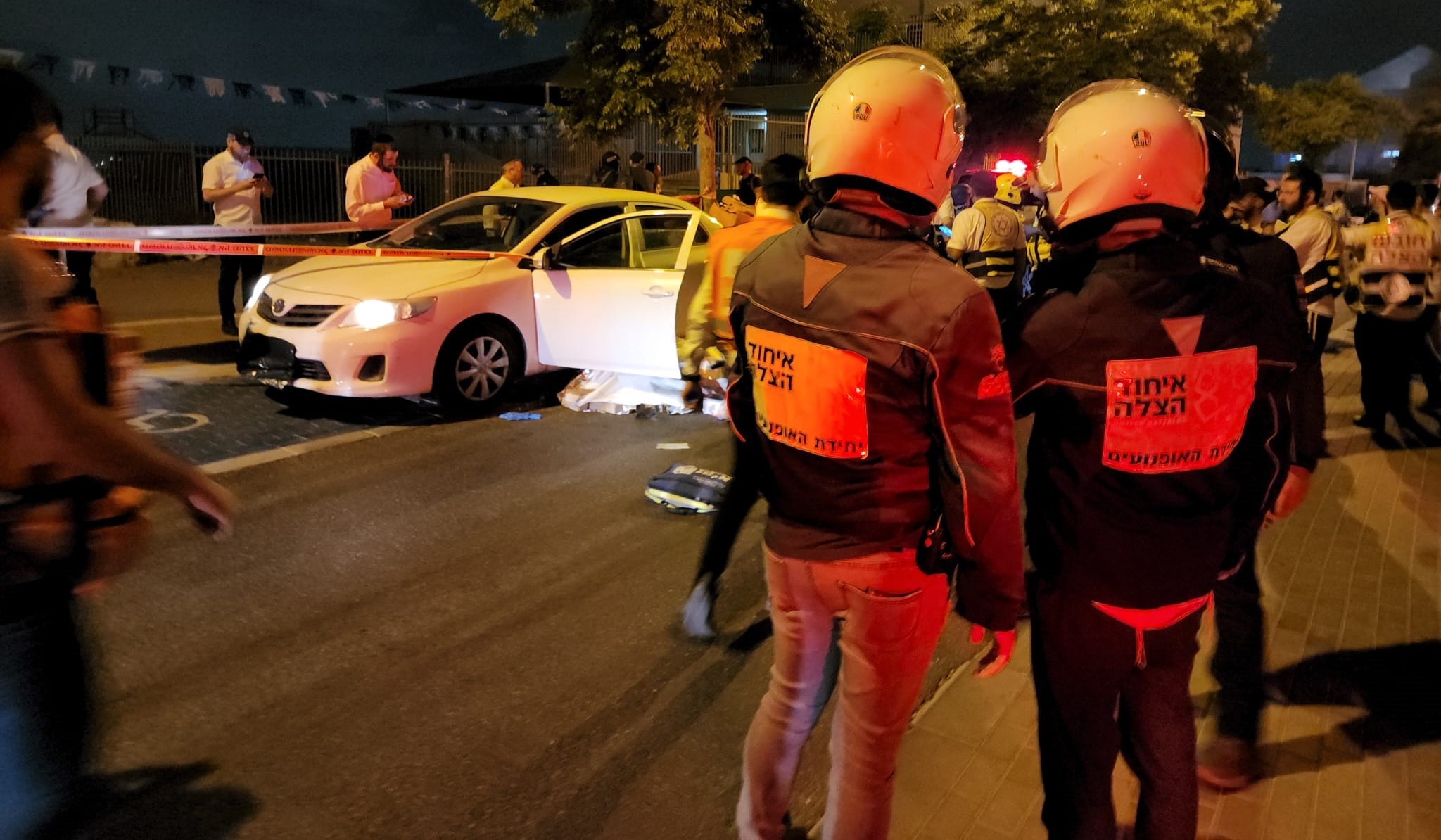 United Hatzalah workers at the scene of a terrorist attack on Ibn Gvirol Street in Elad, east of Tel Aviv and near the city of Petach Tikvah, on Yom Ha’azmaut, Israel’s Independenc Day, on May 5, 2022. Credit: United Hatzalah

“When will the hatred and violence end?” said a tweet from the Friends of Simon Wiesenthal Center in Canada. “We are sickened to learn of yet another suspected terror attack in Israel, which has taken the lives of three people and injured several others. Our thoughts are with the victims and their loved ones.”

Agudath Israel of America tweeted that it is “horrified by the news of a terror attack in Elad, Israel. We are praying for the victims and their families.” They followed up that tweet with the text of Psalm 130, which many recite in times of trouble.

Stand With Us tweeted: “At least three innocent people were murdered in tonight’s deadly terror attack in Elad, central Israel,  #Israel, and at least 3 more are left fighting for their lives, as Israelis were celebrating Israel’s Independence Day. May their memories forever be a blessing.”

Rabbi Abraham Cooper, associate dean and director of global social action at the Simon Wiesenthal Center in Los Angeles, said: “No current peace partner in Holy Land. Palestinian leadership continues to praise and support terrorists, and reward them and their families for murdering and maiming Jews. It will stop when the world holds [Palestinian] leadership accountable for their incitement and support for terrorism.”