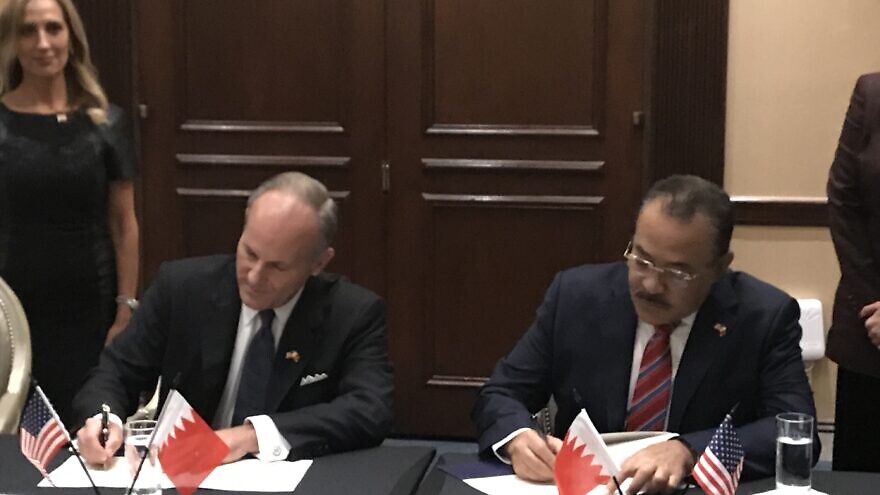 U.S. Special Envoy for Monitoring and Combating Anti-Semitism Elan Carr and Dr. Shaikh Khalid bin Khalifa Al Khalifa, chairman of the board of trustees of the King Hamad Global Centre for Peaceful Coexistence in Bahrain, a memorandum of understanding (MOU) on combating anti-Semitism at the Willard InterContinental in Washington, D.C., on Oct. 23, 2020. Photo by Jackson Richman/JNS.
Republish this article
666 WORDS
Spread the word.
Help JNS grow!
Share now:

(October 23, 2020 / JNS) The United States and Bahrain signed on Thursday a memorandum of understanding (MOU) on combating anti-Semitism.

In a small ceremony at the Willard InterContinental in Washington, D.C., the three-year MOU, which will be eligible for renewal, was signed by U.S. Special Envoy for Monitoring and Combating Anti-Semitism Elan Carr and Dr. Shaikh Khalid bin Khalifa Al Khalifa, chairman of the board of trustees of the King Hamad Global Centre for Peaceful Coexistence in Bahrain.

“We all know that hatred is the enemy of peace,” said Al Khalifa before the signing, adding that “all the groups in the world should be respected despite their belief[s].”

Just before the signing, Carr noted that Bahrain has made itself the first in the Middle East to join the United States in combating “the ancient, recurring human sickness that is anti-Semitism. The first to include the delegitimization of the State of Israel in that project.”

Carr noted that the King Hamad Global Centre placed an emphasis on programs for future generations.

“When you invest in education, you are truly building that future. That future that all of us … aspire to. … Why do we do what we do if not for that future generation?” he said.

In remarks before the signing, U.S. Deputy Special Envoy for Monitoring and Combating Anti-Semitism Ellie Cohanim noted, “There has been a Jewish community living in Bahrain since the 1880s, and the fact that the community has had an uninterrupted presence in the Kingdom since then sets Bahrain apart from the rest of the region. Bahrain’s Jews enjoy equality and the Kingdom of Bahrain truly serves as a model for the Middle East North Africa region of religious freedom and peaceful coexistence.”

The MOU states that the King Hamad Global Centre and the U.S. State Department’s Office of the Special Envoy to Monitor and Combat Anti-Semitism work to develop and implement programs to combat anti-Semitism and promote peaceful coexistence.

The two-page document states that “Arabs and Jews are both Semitic peoples that are threatened by hatred or intolerance toward Semitic peoples,” and that “all peoples of the Middle East should aspire to coexist in tolerance and mutual respect.”

It also acknowledges that the International Holocaust Remembrance Alliance (IHRA) definition of anti-Semitism.

‘Practicing the tenets of their respective faiths’

In his remarks before the signing, Carr noted that Bahrain is the first country in the Middle East to “use and embrace” the IHRA definition.

The MOU states that “anti-Semitism is a vile poison that must be eradicated from the world,” and that “purveyors of anti-Semitism in the Middle East seek to spread this evil as a political tool to manipulate the Arab and Muslim world.”

Moreover, the document states, “The spirit of this cooperation is intended to be guided by the principles of the Kingdom of Bahrain Declaration of July 3, 2017.”

That 2017 document states, “For hundreds of years, different religious groups have lived harmoniously, side by side, in the Kingdom of Bahrain, fully practicing the tenets of their respective faiths in blessed, peaceful coexistence with each other. We humbly offer the centuries-old traditional Bahraini way of life as an example to inspire others around these principles.”

It also states, “It was from within this region the three Abrahamic Faiths emerged. Accordingly, their principles have made this region home to countless millions from across all the world’s religions. Therefore, we people who use religion, who teach religion, and who are in positions of influence, declare that we will do all within our power to ensure that religious faith is a blessing to all mankind and the foundation for peace in the world.”

The MOU signing came days after Bahrain and Israel signed deals to formally normalize relations and a little more than a month after Israel’s signing of the U.S.-brokered Abraham Accords with the United Arab Emirates and Bahrain on Sept. 15.

#BREAKING: US and #Bahrain sign MOU on combating #Antisemitism pic.twitter.com/vAIZ2PqfXp