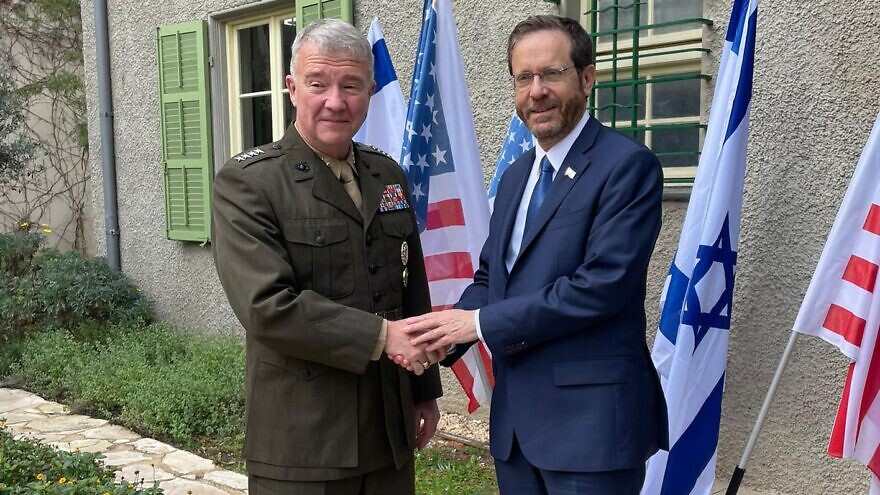 (March 4, 2022 / Israel Hayom) Iran is the biggest threat to regional security, and the US will do everything possible to prevent it from securing nuclear weapons, Gen. Kenneth F. McKenzie tells Israel Hayom in a special interview during a farewell visit before stepping down as head of CENTCOM, which Israel joined last year after being reassigned from the US European Command (EUCOM).

While in charge of CENTCOM, McKenzie spearheaded efforts to tighten operational and intelligence cooperation between the IDF and the US armed forced, as well as a series of joint drills in which other nations in the region took part, including the UAE, Bahrain, Egypt, and Jordan. Some of the drills were designed to display a united front against Iran.

“We are remarkably impressed with the Ukrainian resilience under enormous pressure and also very impressed with the way the coalition of like-minded nations has recognized the threat to European stability that this invasion provides, and I think the next few days are going to be very taxing for everyone,” he says.

Q: Would you agree with what people are saying that this war signifies the weakness of the West, led by the US?

McKenzie: “I don’t believe so at all. I think it actually talks about the strength of the West. The war is not over, events have not yet unfolded and I wouldn’t say that at all.”

Q: Do you see and end that is not the obvious one, in which Russia does not take over Ukraine?

A: “Russia can take over Ukraine, but that doesn’t mean that the story is over. You know, I just don’t know what is going to happen, it’s difficult to know. but I would not say it is a symbol of weakness.”

Q: How can you stop the Russians from expanding and going further than Ukraine?

A: “Well, we note that further expansion would involve acting against countries which with we have Article 5 relationship. In CENTCOM I look at where we interact with the Russians, we interact with the Russians in Syria … and in Syria we’ve got deconfliction procedures that are well established and with minimal friction we have pursued our tasks in Syria and haven’t seen an elevation of tension there.”

Q: What would you say are the biggest threats to world security and stability? Moscow and Beijing?

A: “I won’t answer that question directly, but I will tell you that in our national defense strategy and in our approach we identify China as a significant threat and Russia as a significant threat. North Korea and Iran are threats, not on the scale of the first two, but they are threats, and of course, violent extremist organizations. The US is a global power so we have to take a global view and you have to deal with more than one threat, and you have to have the ability to balance amongst those threats.”

Q: Biden said upon entering the White House that force would be a last resort. It didn’t work with Russia. Would it work in the Middle East, against Iran?

A: “We have a couple of goals with Iran. One – we don’t [allow] them to have a nuclear weapon. We are pursuing that in a variety of means, foremost among them the diplomatic process that is underway with our negotiators right now. At the same time, my part of that problem is to deter Iran from taking offensive action either against us or against our partners in the region or even through their proxies. And we have had some success doing that.”

Q: Can Iran be deterred in a reality in which the Houthis in Yemen operate against Saudi Arabia and the United Arab Emirates? We see the actions of Hezbollah in Lebanon, we see the militias in Iraq and Syria. Why would one be optimistic about Iran coming under the umbrella of the JCPOA?

A: “One principal tasks of our deterrence in the region is to prevent state-on-state conflict, and that has been prevented. Below that level [there are] certainly a lot of activities in the gray zone, Iranian proxies, their malign activities. I don’t know that we have the ability to actually stop that kind of activity, but what we can do is prevent escalation. And that’s more of a central task that confronts us.”

Q: If you were an Israeli, would you agree that Iran presents the biggest threat to the world, or at least to the region?

A: “I can’t interpret the Israeli position. But from where I’m at, from US Central Command, we see Iran as the principal bad actor and we focus on Iran, so we believe that regionally, in the region for which I am responsible, we are completely focused on them as the principal set of threats both in the region and externally.”

Q: Can Iran be trusted?

A: “I don’t think you need to trust anyone. I think what you need to do is evaluate people based on what they do, not on what they say. So trust is really is not necessarily a factor here.”

Q: Do you believe the Iranians when they say their goal is not to reach a nuclear weapon?

A: “It doesn’t matter what I believe. What matters is what I observe and detect. They are in a negotiation process with us right now, and I do not believe they have broken out toward a nuclear weapon at this time.”

Q: Should we believe the US when you say that you will do anything to prevent Iran from reaching nuclear weapon capability?

A: “We have been a good partner for a number of years. I can’t answer that question, only you can answer that question. But I would tell you this: part of my visit here and other visits in the region over the last few weeks has been to send a message of assurance that the United States sees the importance of this region and the importance of our relationship with our friends and allies in this region, and we are going to continue to stay engaged.”

Q: Only on the Iran issue, or other matters, as well?

Q: What kind of cooperation do you see between the US and Israel, and may other partners in the region?

A: “I think the entry of Israel into CENTCOM area of responsibility was an important step because it aligns the direction from which Israel’s principal threats come with their security arrangements. We are focused on Iran. Israel sees its principal threat from Iran. There’s a natural congruence of concern between CENTCOM and Israel. Additionally, we have an opportunity with other nations that also see the expanding, concerning nature of the threat from Iran. That threat is one of ballistic missiles, unmanned aerial systems, cruise missiles. Everyone sees the growth of this threat, which has been marked over the last five years.

“There’s an opportunity here for nations to work together to achieve integrated air missile defense. This is a great opportunity. Israel has enormous capabilities to offer in this domain, and we believe we will work bilaterally and multilaterally to make the most of those capabilities.”

Q: We’ve seen joint drills with Bahrain, the UAE, other states to the west of Israel. Do you see that expanding, to Saudi Arabia, for example?

Q: Israel is looking at what’s happening in Ukraine and saying that we have to defend ourselves by ourselves. You were just at Yad Vashem. Do you understand that?

A: “I certainly understand that feeling. I went today and left with a renewed sense of horror and outrage. I completely understand. I also know that there are many like-minded nations who want to assist Israel in its defense and work on that partnership, the United States is first among them.”

Q: Can Israel count on US friendship and support in the future?