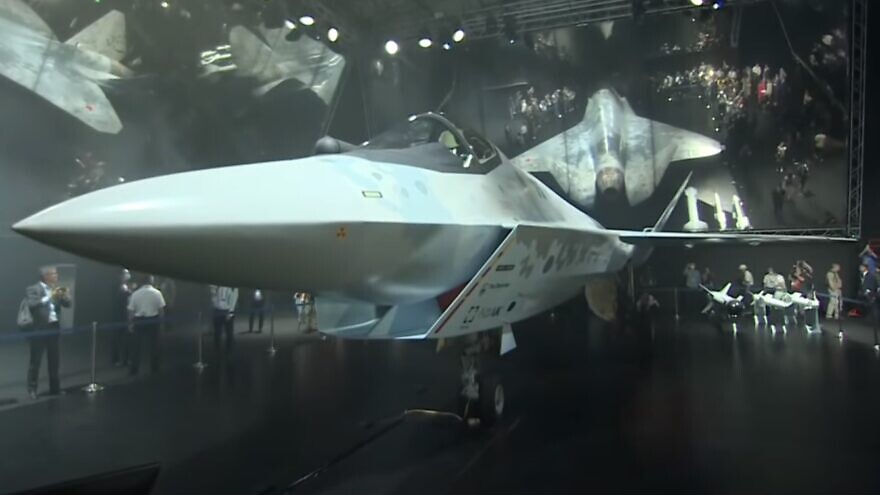 (July 21, 2021 / JNS) As soon as it can enter into operations, the new Russian single-engine stealth fighter jet will likely arrive in the Middle East through future arms sales to local countries, though this does not form a severe threat to Israel’s security, a former Israeli defense official has assessed.

Russia is due to unveil its Checkmate jet at the MAKS international air exhibition, held from July 20 to July 25 at Zhukovsky International Airport, 40 kilometers southeast of Moscow. The jet is being made by Russia’s United Aircraft Corporation, of which the Russian government owns a majority stake.

“We have to assume that sooner or later, the new Russian stealth fighter will arrive in the Middle East,” said Ramati.

The fact that stealth technology will be available to states that have not been able to purchase the F-35 fighter jets, which are made by America’s Lockheed Martin, means that traditional Israeli objections to sales of the F-35 to regional countries become less relevant.

It will be several years before the jet is ready for operational use.

The Israeli Air Force does not deal with air-to-air combat scenarios these days, but Israeli air defenses will still need to be able to ensure they can deal with the new jet, said Ramati.

Israeli defense industries, on the other hand, like other global industries, may have a new opportunity to develop various electro-optical sensors, radars and interceptors and to export these in light of the jet’s arrival to some markets around the world.

So far, the F-35 has been “the only game in town” in Western countries when it comes to fifth-generation stealth fighter jets, he said.

European jet producers will likely not have their own next-generation stealth fighters until the mid-2040s, he assessed. (China has two stealth fighter jets: J-20 and J-31.)

‘We don’t know about this plane’s avionics yet’

Only a few images have so far emerged of the jet on social media, and those suggest that the plane is around 80 percent of the dimensions and weight of the F-35, said Ramati.

The new jet is powered by a version of AL-41F Russian-made engine. It has a highly maneuverable, aerodynamic configuration.

“It can carry 7.4 tons of armament, and the max theoretical range is 3,000 kilometers (meaning an estimated 750-kilometer operational radius),” said Ramati.

“Why is it attractive? There are states that have a hard time buying the F-35, either because they have been ruled out by the [U.S.] State Department, because they are not willing to line up with American political conditions to purchase the F-35 or because they can’t afford it,” explained Ramati. “The Russian stealth fighter will be significantly cheaper than the F-35. The Russian claimed it is less than $30 million per unit.”

Some states could also purchase the jet and install Western avionics on it—just as India did with the Sukoi-30 fighter aircraft, the Russian parallel of the American F-15.

“We don’t know about this plane’s avionics yet,” said Ramati. “Does it have a suitable radar? We can assume it has scaled-down radar like the type onboard the Sukhoi 57, which is the twin-engine stealth fighter used by the Russian Air force and Navy. This type of radar employs measures to avoid detection, and is known as LPI [Low Probability of Intercept].”

Ultimately, he added, the State Department will likely need to update its export policy when the Russian jet goes on sale or face several new clients opting for the Russian stealth technology in place of America’s own jets.