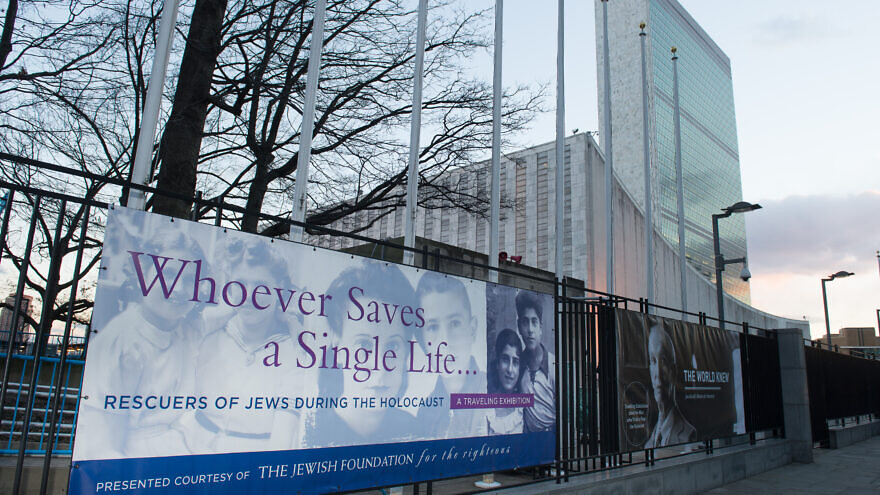 The JFR's “Whoever Saves a Single Life...Rescuers of Jews During the Holocaust” exhibit first opened at the United Nations in 2013 and has since travelled around the country providing communities with an oppportunity to learn more about rescue during the Holocaust. Credit: Jewish Foundation for the Righteous
Spread the word.
Help JNS grow!
Share now:

Leading national Holocaust education nonprofit, The Jewish Foundation for the Righteous (JFR), has brought its exhibition, “Whoever Saves a Single Life…Rescuers of Jews During the Holocaust,” to the Ahavath Achim Synagogue through May 8, 2022. The exhibit highlights the heroic efforts of non-Jews who saved Jewish lives during the Holocaust and was first debuted at the United Nations in 2013.

The exhibition consists of 19 panels, 10 of which showcase different forms of rescue such as: Webs of Survival: Rescue Networks; Taking Action: Young Rescuers; Faith in Action: Religious Rescue; From Words to Deeds: Americans in Europe; Defying Orders: Rescue in Uniform; Outwitting Evil: Ingenuity in Rescue; Against All Odds: Rescue In the Camps; Envoys of Humanity: The Diplomats; Precarious Life: Shelter and Hiding; and Shielding our Citizens: Rescue in Denmark. Tour groups are accompanied by a JFR guide through the displays to provide a comprehensive overview of each rescuer’s story and its significance.

The exhibit is open to individuals, local churches, synagogue and interfaith groups, and students in middle and high school by appointment. To organize a visit, please contact the synagogue at (404) 603-5741.

The exhibition is made possible by a generous grant from the Conference on Material Claims against Germany (Claims Conference) and donors to the JFR.

“These instances of heroism not only deserve our recognition because of each story’s inherent remarkability, but maybe more importantly, because it is possible for us to learn from them,” said Ahavath Achim Synagogue Senior Rabbi Laurence Rosenthal. “Today, as we witness many formidable world events unfold, we too can choose to be upstanders instead of bystanders, to help our neighbors, saving them, even when it proves to be both inconvenient and challenging.”

“Now in its ninth year, the JFR’s traveling exhibition continues to showcase individual acts of courageousness and bravery from the Holocaust, telling 40 different stories of rescue and survival through narratives, photographs and documents,” said JFR Executive Vice President Stanlee Stahl. “The exhibition’s design caters to a broad range of demographics, from young students to adults, furthering each person’s understanding of this incredibly nuanced topic.” 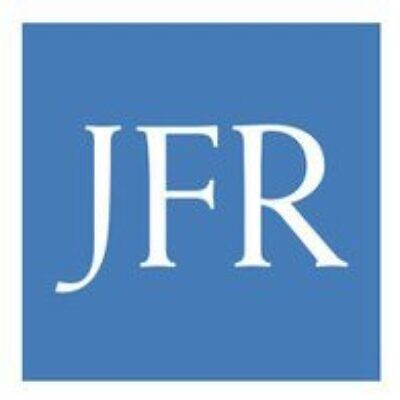 Jewish Foundation for the Righteous
The JFR continues its work of providing monthly financial assistance to more than 130 aged and needy Righteous Gentiles, living in 14 countries. Since its founding, the JFR has provided more than $42 million to aged and needy rescuers – helping to repay a debt of gratitude on behalf of the Jewish people to these noble men and women. Its Holocaust teacher education program has become a standard for teaching the history of the Holocaust and educating teachers and students about the significance of the Righteous as moral and ethical exemplars. For more information, visit https://www.jfr.org/.
Publish your organization's press release on JNS Wire
Releases published on the JNS Wire are communicated and paid for by third parties. Jewish News Syndicate, and any of its distribution partners, take zero responsibility for the accuracy of any content published in any press release. All the statements, opinions, figures in text or multimedia including photos or videos included in each release are presented solely by the sponsoring organization, and in no way reflect the views or recommendation of Jewish News Syndicate or any of its partners. If you believe any of the content in a release published on JNS Wire is offensive or abusive, please report a release.
Never miss a thing
Get the best stories faster with JNS breaking news updates