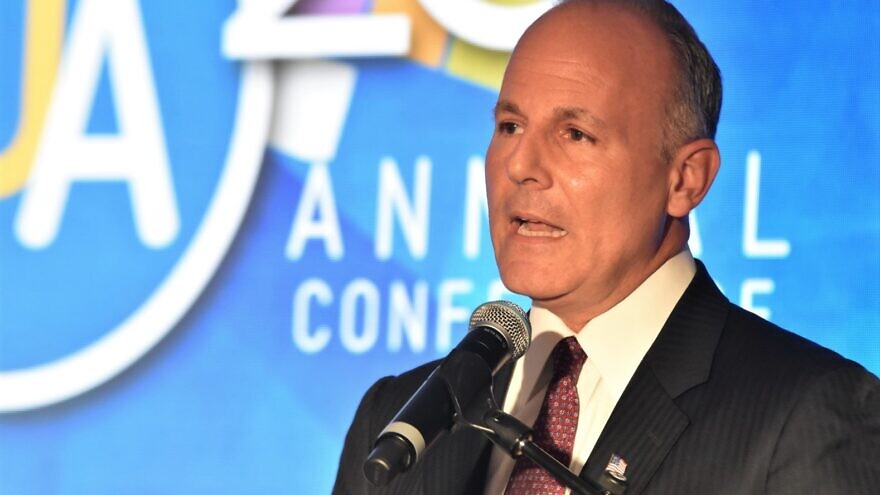 During his two years in office as the senior advisor to Secretary Pompeo on anti-Semitism, Carr negotiated groundbreaking agreements with foreign governments, convened the first-ever U.S. Government-sponsored conference on combating online hate and drove the establishment of important new policies on anti-Zionism, anti-Israel discrimination, and campus anti-Semitism. He regularly met with foreign leaders, often in foreign capitals to drive US policy on these issues.

Prior to joining the Trump Administration, Mr. Carr prosecuted violent felony crimes for more than a decade as a Deputy District Attorney for Los Angeles County. Carr is also an officer in the United States Army Reserve and he has received multiple awards for his two decades of military service. In 2003-04, he spent nearly a year on military deployment in Iraq.

Carr joins CAM’s Advisory Board alongside additional new members, André Azoulay (Senior Advisor to King Mohammed VI of Morocco); Mario Bucaro (Ambassador of Guatemala to Mexico); Danny Danon (Former Ambassador of Israel to the UN); Andrés Roemer (UNESCO Goodwill Ambassador for Social Change and the Free Flow of Knowledge) and Dina Porat, (Professor Emeritus and Head of the Kantor Center for the Study of Contemporary European Jewry at Tel Aviv University and Chief Historian at Yad Vashem). All participated in an Advisory Board meeting last week.

Elan Carr stated, “It is truly a privilege for me to join CAM’s Advisory Board and be part of this remarkably effective movement. I am working with CAM because I know firsthand that the stakes are very high in our fight against the scourge of Jew-hatred. Anti-Semitism threatens the future of every decent society and of civilization itself. Sadly, we have much to do for this cause. I look forward to working with CAM’s distinguished lay and professional leaders as we fight to make our world a better place.”

Sacha Roytman-Dratwa, The Combat Anti-Semitism Movement Director commented, “We are tremendously honored to welcome Elan S. Carr to our Advisory Board. He has made an exceptional contribution to the fight against anti-Semitism during his time as U.S. Special Envoy. He has helped place anti-Semitism on the global agenda, including in countries where tackling Jew-hatred would previously have been unthinkable. We look forward to working alongside him to ensure that this momentum continues in order to finally eradicate the plague of anti-Semitism.”

The Combat Anti-Semitism Movement is a non-partisan, global grassroots movement of individuals and organizations, across all religions and faiths, united around the goal of ending anti-Semitism in all its forms. Since its launching in February 2019, 305 organizations and 310,000 individuals have joined the Combat Anti-Semitism Movement by signing the campaign’s pledge. The CAM Pledge draws upon the IHRA international definition of anti- Semitism and its list of specific behaviors used to discriminate against the Jewish people and the Jewish State of Israel.

Combat Antisemitism Movement
Publish your organization's press release on JNS Wire
Releases published on the JNS Wire are communicated and paid for by third parties. Jewish News Syndicate, and any of its distribution partners, take zero responsibility for the accuracy of any content published in any press release. All the statements, opinions, figures in text or multimedia including photos or videos included in each release are presented solely by the sponsoring organization, and in no way reflect the views or recommendation of Jewish News Syndicate or any of its partners. If you believe any of the content in a release published on JNS Wire is offensive or abusive, please report a release.