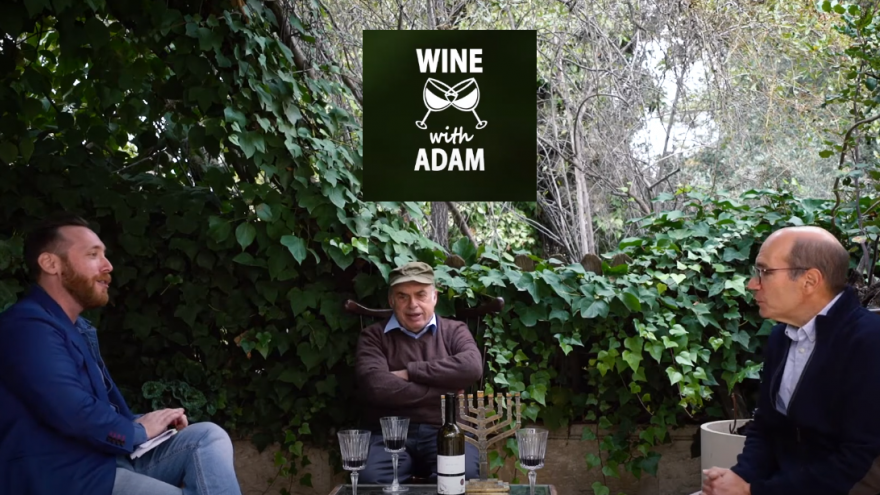 The newly formatted pilot episode of ‘Wine with Adam’ was released on February 12. Filmed in a Jerusalem garden, the episode features Natan Sharansky—famed Israeli politician, human rights activist, and author who spent nine years in Soviet Union prisons during the 1970’s and 80’s—and Professor Gil Troy, a prominent American historian, author, and Zionist thinker. Together with Bellos, the trio drinks a bottle of Gush Etzion Winery’s Spring River Red Blend and delves into a discussion about the new book Sharansky and Troy have recently co-authored, ‘Never Alone.’

While the filmed conversation touches on serious topics such as Jewish peoplehood and the power of identity, Zionism and intersectionality, freedom and slavery, culture versus politics, and body vs. soul. The 14-minute episode is filled with humor, good spirit, and cinematic animation that makes for an enjoyable yet informative viewing experience.

“‘Wine with Adam’ is a new way of cinematic storytelling,” says TIIF CEO Adam Scott Bellos. “We are using film that isn’t propaganda to share and to teach the stories about Israel and Jews that people need to hear and want to. We are experimenting with film to recreate elements of the ‘Zionist Salon’ which existed in the early days of the Zionist movement. By bringing viewers into these high-level a share somewhat interactive conversations about Israel, we hope to create a new type of Zionist renaissance through film.”

The series also has a goal of combatting antisemitism.

“The reason Anti-Semitism exists is that people don’t know true things about Israel and the Jews and the people who run this country. The more people begin to understand and get to know us, the less trouble we will have in this world. ‘Wine with Adam’ is going to open these doors and allow viewers to know the stories of Israel and its people intimately.”

As evidenced in the pilot, the series will be both severe and lighthearted, taking stylistic and conversational inspiration from a range of celebrated TV personalities and talk shows, including James Lipton’s ‘Inside the Score Studio,’  Barbara Walters’ ’20/20,’ and Jerry Seinfeld’s ‘Getting Coffee in Cars with Comedians.’

The series will be produced by The Israel Innovation Fund’s in-house film studio “What If? Studios,” which is headed by award-winning filmmakers Daria Turetski and Ella Kohn. The video series is being distributed in partnership with Jewish News Syndicate (JNS).

Future guests will include Arabic and Islamic history Professor Ze’ev Maghen, Israeli politician Michal Cotler-Wunsh, former Israeli politician Einat Wilf and Israeli columnist and editor Shmuel Rosner, well as Israeli political figures running for office. Gil Troy is also slated to return to the show to discuss various Zionist ideas. The conversations will take place over a different bottle of wine from another Israeli winery in each new episode.

The Israel Innovation Fund (TIIF)
The Israel Innovation Fund (TIIF) is registered in the U.S. as a 501(c)3 non-profit and in Israel as an amuta. We are largely based in Tel Aviv and Jerusalem. Our vision is to reignite the Zionist spirit in the twenty-first century by connecting people around the world through the vibrancy and creativity of contemporary Israeli culture. “Start-Up Nation” taught us that Israel’s technological excellence flows from deeper elements of national character. Through cutting-edge contemporary culture, lifestyle and travel young diaspora Jews and non-Jews are discovering new ways to personally connect to the Israeli experience in ways that go far beyond conflict and survival. The Fund operates as a venture philanthropic fund to develop this “Creative State,” investing and where necessary incubating high-impact enterprises that are capable of sustaining themselves through commercially viable revenue-generating activities. We also use the returns to support Israeli nonprofits that distinguish themselves for their innovation, efficiency and impact.
Publish your organization's press release on JNS Wire
Releases published on the JNS Wire are communicated and paid for by third parties. Jewish News Syndicate, and any of its distribution partners, take zero responsibility for the accuracy of any content published in any press release. All the statements, opinions, figures in text or multimedia including photos or videos included in each release are presented solely by the sponsoring organization, and in no way reflect the views or recommendation of Jewish News Syndicate or any of its partners. If you believe any of the content in a release published on JNS Wire is offensive or abusive, please report a release.