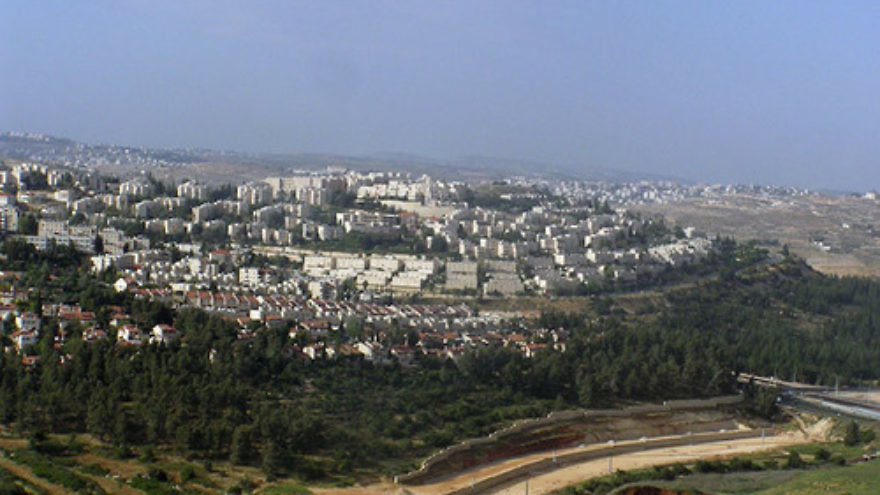 Have you ever bought a slice of pizza in the Ramot neighborhood of Jerusalem? Have you visited friends at the Hebrew University dormitories in the city’s French Hill section? Or taken the Jerusalem light rail train to the Neve Yaakov stop? Guess what—you just might be a Zionist war criminal!

Ramot, French Hill, and Neve Yaakov are decades-old Jewish neighborhoods that are physically indistinguishable from other sections of Israel’s capital city. Ramot (population: 70,000), French Hill (23,000), and Neve Yaakov (40,000) technically are situated beyond the old pre-1967 armistice line, but you couldn’t tell that by looking around and I doubt even the local residents know. In some parts of Ramot, one part of a street is in “pre-1967” Jerusalem and one part is in the “post-1967” part. They’re inseparable.

The Palestinian Authority (PA), however, wants the world to believe that these major, urban sections of Jerusalem are “settlements.” The PA’s news media and government publications and school text books call them “the illegal Ramot settlement” and “the illegal French Hill settlement.” They say that all these areas are part of “occupied east Jerusalem.”

As PA Minister for Jerusalem Affairs Hatem Abdel Qader told the Jerusalem Post a few years ago, “There is no difference between a settlement in the West Bank and a so-called neighborhood in east Jerusalem. In both cases we are talking about territories that were occupied in the 1967 war.”

PA officials don’t know much about geography. Ramot is actually primarily in the western part of Jerusalem, while French Hill and Neve Yaakov are in the northern part of the city. But for the PA, the term “east Jerusalem” is not really a geographic designation—it’s a political weapon. The PA claims that any part of Jerusalem which was occupied by Jordan prior to 1967 is intrinsically Arab and Muslim territory, and therefore any Jewish neighborhood built there is automatically illegal.

The term “settlement,” too, is a political weapon for Palestinian propagandists. They know that the word “settlement” conjures up images of wild-eyed Jewish militants plunking down trailers and stockades in some Arab field like thieves in the night. Of course there’s nothing about Ramot or French Hill or Neve Yaakov that resembles a “settlement.” They consist of modern apartment buildings, schools, stores, and hospitals. Jerusalem’s buses run there just as they run throughout the rest of the city.

But the Palestinians know that when Americans or other foreigners realize that Ramot and the other areas are parts of a major urban center, it will be obviously how absurd it is to demand that they be dismantled. So the PA brands them “settlements” and hopes nobody finds out what they really are.

Meanwhile, another senior Palestinian official, Saeb Erakat, recently ratcheted up this PA war of words. According to the Jerusalem Post (April 14), Erekat announced that not only are all existing “settlements” illegal, but any Israeli construction beyond the pre-1967 armistice line constitutes a “war crime.” Erekat for many years was the PA’s chief negotiator and currently serves as secretary-general of the PLO. (Although these days we hear mostly about the PA rather than the PLO, they are both chaired by Mahmoud Abbas and the PLO remains a major force in the Palestinian political world.)

If Erekat and his colleagues succeed in convincing international bodies (such as United Nations agencies) or governments (such as their European allies) to go along with the designation of any post-1967 construction as “war crimes,” then any Israeli political party which supports the right of Jews to live in Ramot, and any tourist who patronizes restaurants in French Hill, could be branded war criminals.

It should be noted that the Palestinians’ demonization of the Jewish areas of Jerusalem could have some rather ironic consequences. Keep in mind that the overwhelming majority of Israelis and American Jews, from left to right, totally support the existence of neighborhoods such as Ramot and French Hill and Neve Yaakov. In other words, the Palestinians are yelling “War criminal!” not just at Likudniks, but at all Jews who want to safeguard the integrity of the holiest city in Judaism.

See the problem? We Jews may argue furiously among ourselves about whether to make this concession or that, but unless we are prepared to surrender to every single Arab demand—and even J Street says it would not do that—then the Palestinians, in the end, will never be appeased; they will always see all of us as a bunch of Zionist war criminals who deserve to be denounced, ostracized, and maybe worse.