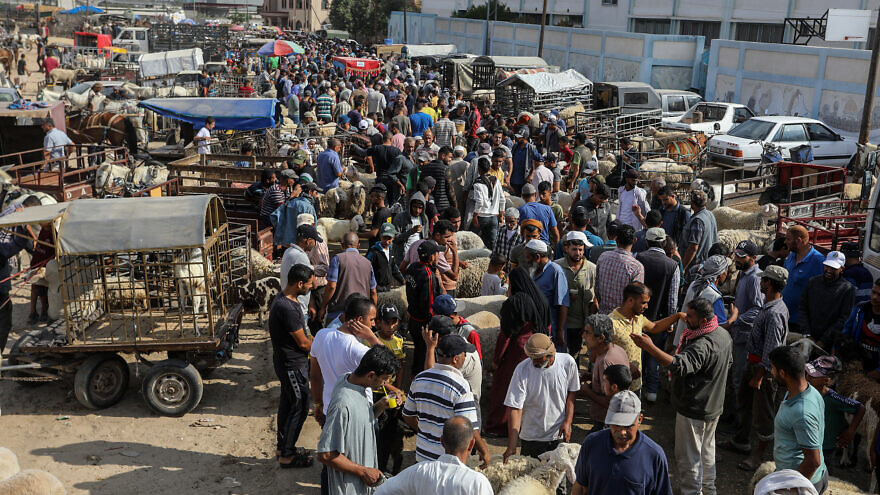 Palestinians choose sheep and cows and camels at a livestock market in Rafah, in the southern Gaza Strip, ahead of the Muslim holiday of Eid al-Adha, July 2, 2022. Photo by Abed Rahim Khatib/Flash90.
Republish this article
1302 WORDS
Spread the word.
Help JNS grow!
Share now:

(July 6, 2022 / JNS) Fifteen years ago, in June 2007, the history of the Israeli-Palestinian conflict underwent a seismic shift. The Islamist terror faction Hamas seized power in the Gaza Strip through a series of deadly raids, firing rockets and mortars at Fatah-run Palestinian Authority bases and storming their positions. In brutal executions, Hamas hurled P.A. personnel to their deaths from rooftops and conducted shootouts in hospitals, forcing many of the remaining P.A. personnel to flee to the West Bank.

Looking back at the Palestinian arena over the past generation, Col. (res.) David Hacham, a former Arab-affairs adviser to seven Israeli defense ministers and a senior research associate at the MirYam Institute, told JNS that “there is no doubt that the main, most significant and dramatic development has been Hamas’s takeover of the Gaza Strip and its forceful expulsion, through the use of violence, of the Palestinian Authority and its personnel from the area.”

This event had a long-term impact on all subsequent internal Palestinian developments, particularly on the balance of power between Hamas and Fatah, and on the nature of the Palestinian-Israeli conflict, he said.

“The takeover of Gaza by Hamas was one of the peaks in the process of Hamas’s build-up of force [since its founding in 1987] and in its efforts to promote its strategic aspiration to turn into the leading, dominant force in the Palestinian system,” said Hacham.

These efforts, which are ongoing today, are accompanied by constant attempts to erode the position of the rival Fatah movement as part of Hamas’s goal of taking over the P.A. and the PLO, according to Hacham. 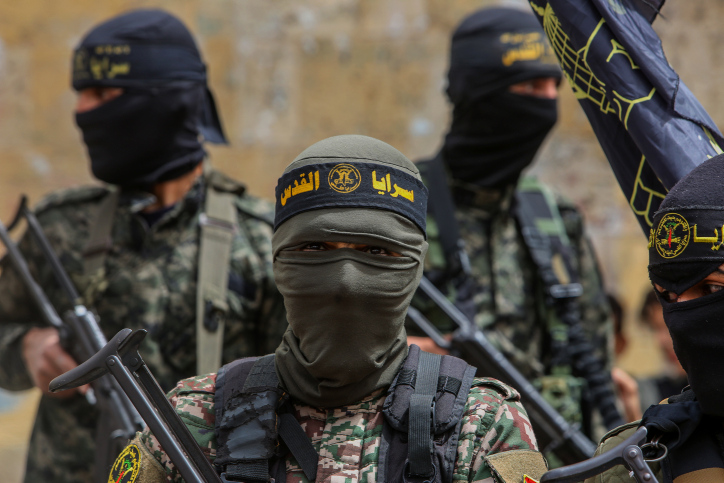 Supporters of Hamas and Palestinian Islamic Jihad participate in a rally to celebrate the deadly April 7, 2022, terror attack in Tel Aviv, in the southern Gaza Strip, on April 8, 2022. Photo by Attia Muhammed/Flash90.

Despite the surprise of the Hamas coup for many observers, it was ultimately an expected step, he said, since it is one station in the terror group’s planned journey to realize its strategic goals, which include the eventual destruction of Israel and its replacement with a Palestinian-Islamic state.

In June 2007, Hacham was serving as an Arab-affairs adviser to the office of the Israeli defense minister, responsible for coordinating contacts with an Egyptian security delegation that was active at the time in Gaza.

“I remember the dramatic events that occurred at that time well,” he said. “Especially the urgent phone call I received from the Egyptian General Burhan Hamad, who headed the delegation of the Egyptian General Intelligence Directorate in the Strip. He told me with great emotion about what was taking place on the ground and asked that I assist in rescuing him from the area. In the end, he was able to reach Rafah Crossing and to exit safely to the Egyptian side,” recalled Hacham.

Ultimately, he said, the Hamas takeover of Gaza created a two-headed Palestinian ruling system in which each center of power is separated from the other by geography, politics, religious orientation and demographics. As a result, said Hacham, the P.A. in effect became a crippled entity, vulnerable and exposed to pressure, which does not represent the entire Palestinian population or territories in which it lives. 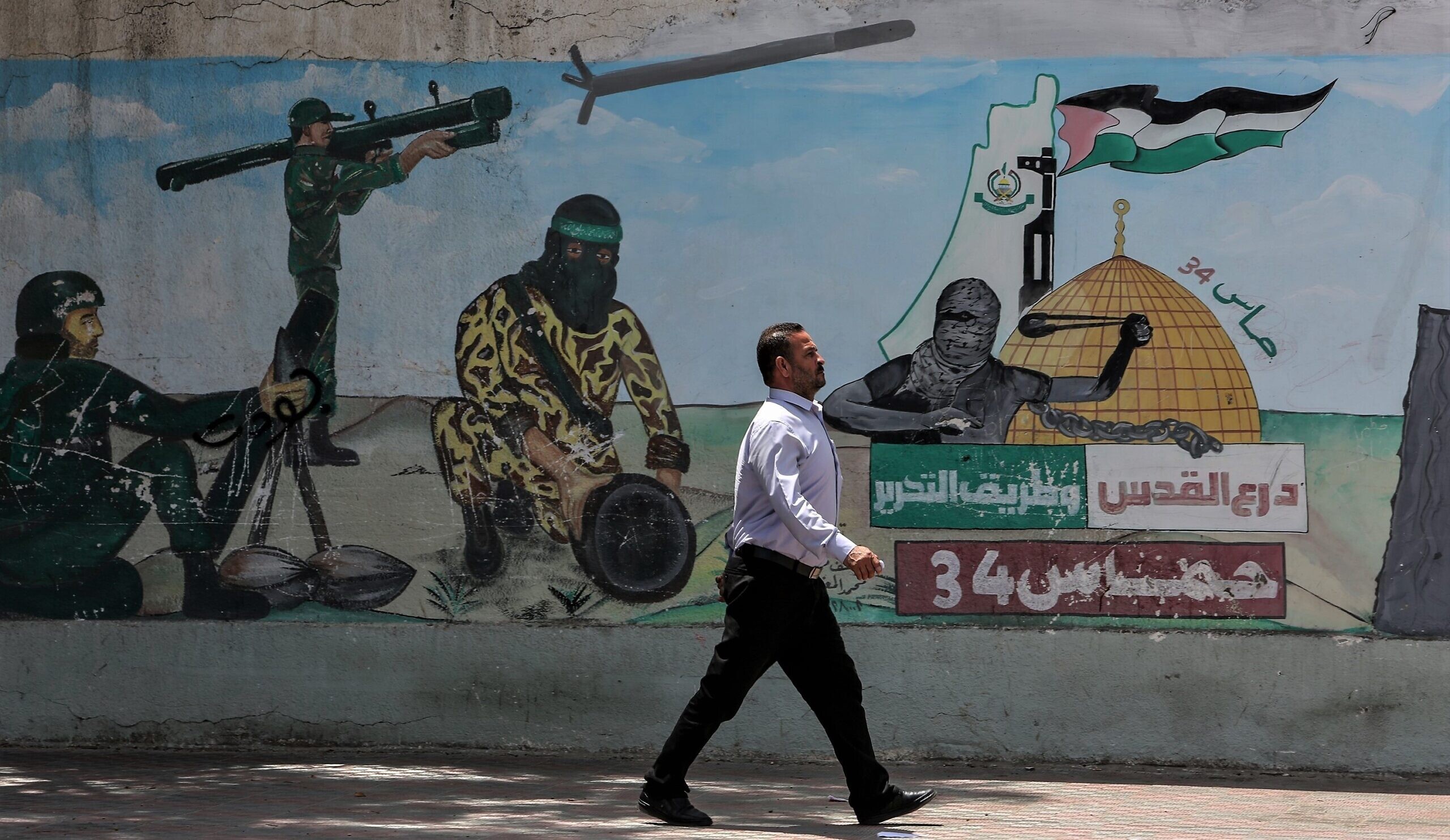 A Palestinian man walks next to graffiti depicting Hamas fighters firing rockets, in Khan Younis town in the southern Gaza Strip, on May 30, 2022. Photo by Abed Rahim Khatib/Flash90.

Col. (res.) Moshe Elad, one of the founders of security coordination between the Israel Defense Forces and the P.A., said that Hamas did not plan to lead a regime in Gaza styled on the Taliban or the Islamic State (ISIS) since the character of the Gazan population is not religious-extremist. “For the Gaza population, this is another government authority, almost an occupation I’d say. Since 1948, when the Egyptians declared a military regime, the residents of Gaza have not experienced a single day of independence,” said Elad, a lecturer at the Western Galilee College in northern Israel.

“Hence, Hamas is another government authority that came after the Egyptian and Israeli authorities,” he added.

On the other hand, Elad argued, Hamas succeeded in creating governmental patterns that are not completely failed and which do not, in certain areas, “fall beneath those of the P.A., and in some areas even surpass it, though both have the same lack of transparency, corruption, nepotism and more.”

“As the years pass, Hamas understands that it cannot be both a terror organization and run a state of 2 million people. Hence, there is a sense that in recent years, this has been internalized among the heads of the organization, and they are dealing intensively with the issue of how to better rule the population, including ways to improve living conditions in the Strip,” he assessed.

One of the ways for Hamas to solve this dilemma of how to rule without giving up on its extremist ideology was to seek a hudna, or temporary ceasefire, lasting several years with Israel, enabling it to get organized when it comes to sovereignty and to improve its government performance, according to Elad.

“This, by the way, characterizes other regimes with fundamentalist natures, like the former Muslim Brotherhood rule in Egypt, Morocco and Tunisia,” he added. “The need to rule a population well and to act as a central address diverts the will to deal with religious extremist ideology.” 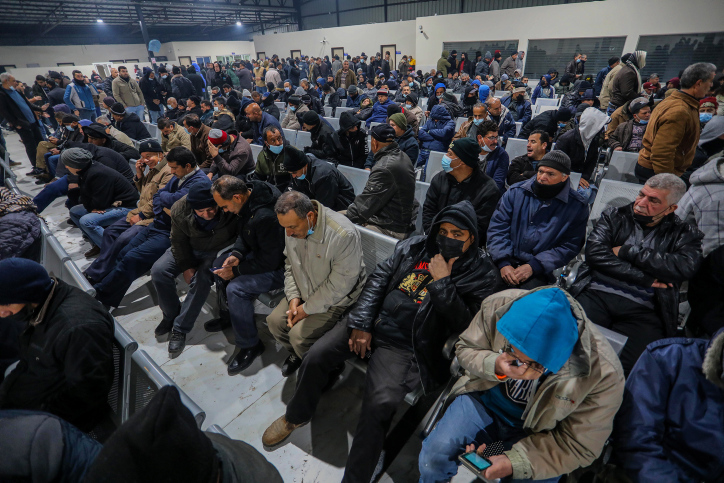 Palestinian workers wait at the Erez border crossing in Beit Hanun in the northern Gaza Strip as they wait to enter Israel for work on March 13, 2022. Photo by Attia Muhammed/Flash90.

Looking ahead at Hamas’s goal of taking over the West Bank, Elad said that this is one of the nightmare scenarios facing the area. “In some cities [in Judea and Samaria], Hamas has de facto rule, like in Nablus and Hebron, and if the Israel Defense Forces were not in the West Bank, there is no doubt that there would be another coup like in June 2007 in Gaza, and no one in the P.A. could have prevented it,” he said.

“The desire to rule the West Bank still exists in Hamas, but the movement knows that it won’t be easy so long as Israel secures the settlements and at the same time ‘keeps an eye’ on the condition of P.A. leader Mahmoud Abbas and his government,” stated Elad, adding that the key junction lies ahead, when Abbas, now 87, departs the scene.

“If Hamas decides to go to elections and to do so democratically, it could win—or at least reach a tie with the PLO. It could be that Hamas understood that only through the democratic path can it take over the West Bank and that the movement is preparing for that,” he explained.

Hacham pointed to key developments leading up to the coup, such as Israel’s withdrawal from Gaza in 2005 and the 2006 Palestinian elections, in which Hamas won a majority of the Palestinian parliament. As a result of these developments, Hamas’s Ismail Haniyeh became head of a Palestinian unity government, which ceased existing after the 2007 coup.

From that point on, said Hacham, Gaza turned into deeply hostile territory for Israel and the launchpad for terrorist and rocket attacks on Israeli cities, leading to rounds of combat, the last of which was “Operation Guardian of the Walls” in May 2021. Israeli farmers suffered from years of arson balloons that burned down crops, and southern residents were exposed to violent attempts—orchestrated by Hamas—to infiltrate the border, which were stopped by the IDF. Southern cities and towns became periodically targeted by indiscriminate mass rocket attacks from Gaza.

According to Elad’s assessment, Israel has, despite the challenges, found an effective formula for managing the conflict, adding that boosting employment and economic prospects, in general, has proven decisive in keeping the territory quiet for stretches of time.

“As long as Hamas remains in its intransient position regarding Israel, this is the way to deal with Gaza—carrot and stick, to open and close the Strip in line with the security situation,” he said.

In the meantime, Hamas plans to wait for Fatah to “exhaust itself” in internal power struggles over Abbas’s successor, noted Elad, and then attempt to take control. However, he pointed out, “so long as Israel is there, this won’t happen.”