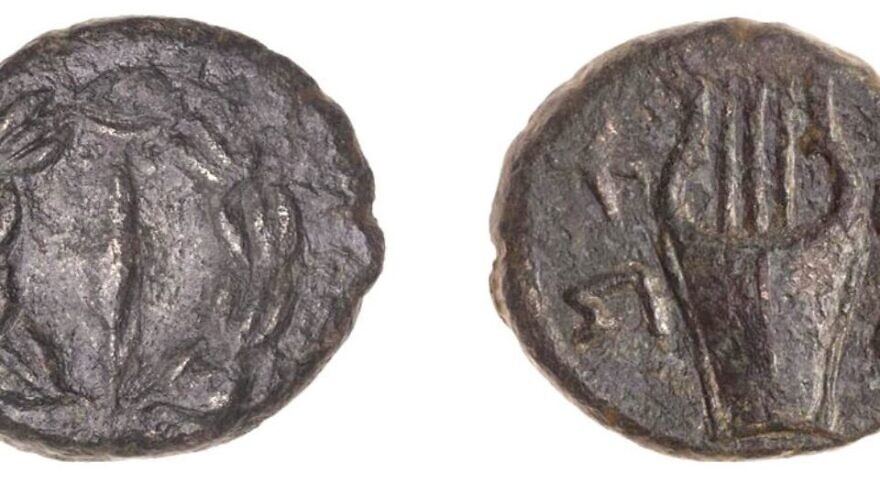 The 2,000-year-old coins that date back to the period of the Jewish revolts against the Romans, July 13, 2021. Credit: Tal Rogovsky.
Spread the word.
Help JNS grow!
Share now:

(July 13, 2021 / Israel Hayom) An archaeological survey in the northeast of the Binyamin Region conducted by the Martin Szuz Department of Land of Israel Studies and Archaeology at Bar-Ilan University has turned up two rare 2,000-year-old coins at two adjacent sites.

One coin, discovered at Khirbet Jabaat, dates back to the Jewish revolt against the Romans and was minted in the year 67 C.E. One side of the coin bears a depiction of a grape leaf and the Hebrew inscription Herut Zion (Freedom for Zion), while the other side is imprinted with a cup and the inscription “Year Two.”

The coin is the latest Second Temple-Era find unearthed at this site, which includes ritual baths, secret tunnels, stone vessels and burial caves.

The second coin, excavated at a site in the cliffs of Wadi Rashash, caused significant excitement among the archaeologists.

Dr. Dvir Raviv, who is directing the survey, explained that the coin was the first tangible evidence that the area in question had been under the administrative control of Bar Kochba, and might even testify to the existence of a Jewish community in the region until 134-135 C.E, despite the prevailing belief that all Jewish communities to the north of Jerusalem were razed in the great revolt of the 7th decade C.E. and never resurrected.

One side of the coin from Wadi Rashash, which is believed to have been minted in 134-135 C.E., is imprinted with a palm frond surrounded by a wreath, which itself is surrounded by the Hebrew inscription LeHerut Yerushalayim (“To the Liberation of Jerusalem”). The other side depicts musical instruments, possibly a harp, and the name “Shimon”—the first name of the leader of the revolt against the Romans, Shimon Ben Kosevah, better known as Shimon Bar Kochba.

The Binyamin Regional Council and the grassroots heritage preservation organization Shomrim al Hanetzach (Preserving Eternity) said in response to the discoveries that the area is full of archaeological remains and antiquities, which are being robbed and destroyed by local Arabs. The council and the organization called on the government to adopt a national emergency plan to save the sites.

Binyamin Regional Council chairman Yisrael Gantz said: “We have a national obligation to preserve these precious finds that tie us to this place. The Israeli government must take responsibility for its heritage and prevent ethno-religious robberies and vandalism.”