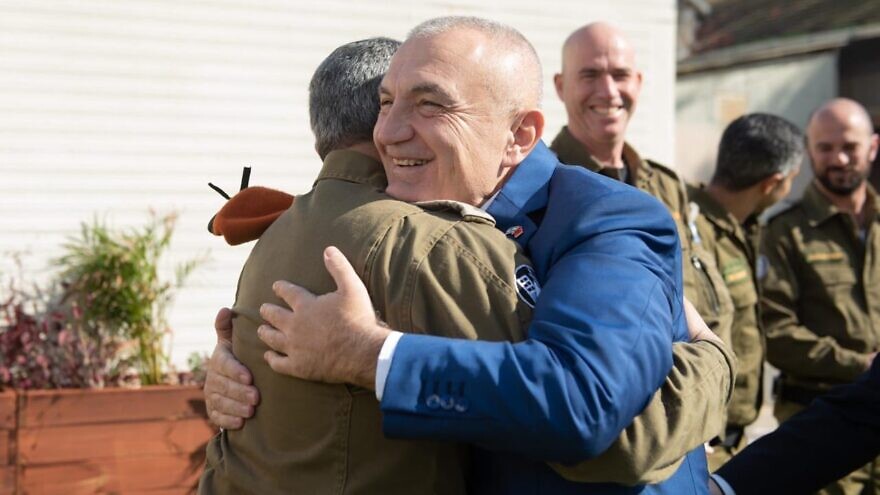 (January 24, 2020 / JNS) While in Israel for the Fifth World Holocaust Forum, President of Albania Ilir Meta met with soldiers from the Israel Defense Forces on Jan. 23 and thanked them for their help following November’s deadly earthquake in his nation.

Meta visited the Ramla military base, where he embraced Israeli soldiers and awarded the “Golden Eagle Decoration” to the IDF’s National Rescue Unit.

The 6.4-magnitude earthquake that struck on Nov. 26 in Albania killed 51 people and injured more than 3,000. It also damaged more than 11,000 buildings, leaving as many as 13,000 people homeless. The natural disaster was the deadliest earthquake to hit the country since 1979.

Israeli military engineers were among the foreign volunteers who worked on determining whether some buildings were safe in the aftermath of the earthquake.

“I want to express [to] you Albania’s deep gratitude for the human solidarity and the inspirational compassion shown during the inspection, evaluation of earthquake-damaged buildings and dwellings, and in particular for calming down residents and for advising Albanian citizens affected by natural disaster, further consolidating the friendly and historical relations between our two nations and our countries,” Meta told the IDF soldiers on Thursday, according to the Albanian Daily News.

This is Meta’s first official visit to Israel since being elected in 2017.