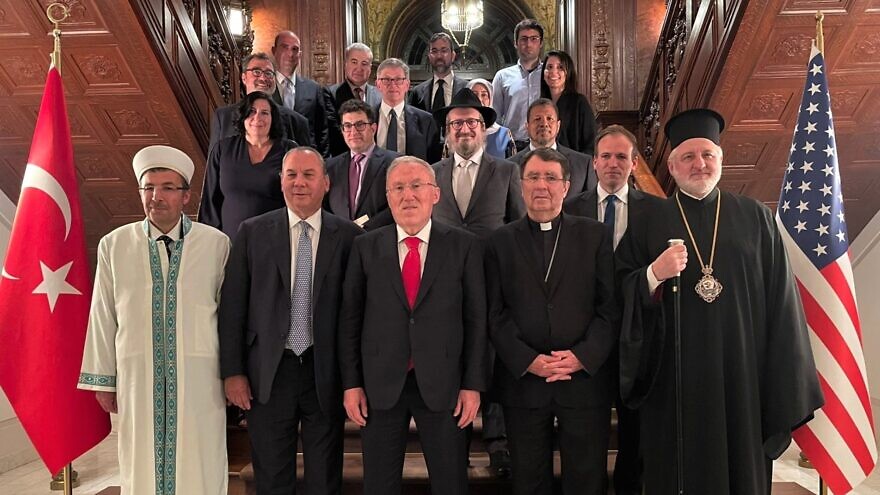 (October 27, 2021 / JNS) The first rabbinic association in the Muslim world started in 2019—pre-dating the Abraham Accords by a year. Many people may be surprised to hear that the Alliance of Rabbis in Islamic States (ARIS) serves a total of 100,000 Jews in 14 Muslim-majority countries. Still more surprising is the positive experience reported by many of the rabbis who live in some of these places.

The alliance, with a stated mission to “support, sustain and advocate on behalf of Jewish life across Islamic States,” boasts a membership that includes 45 rabbis, the majority of them associated with Chabad (though the organization is independent of the Chabad-Lubavitch movement). Of the communities it serves, Azerbaijan is the largest with a Jewish community of 25,000. (Azerbaijan also has the distinction of being home to the only all-Jewish village outside Israel and the United States.)

Rabbi Mendy Chitrik, who serves as chairman, can’t say for sure why there hasn’t been a rabbinic association covering Muslim lands before, particularly given a long Jewish history among Muslim countries.

Chitrik, who has been in Turkey for 20 of those years, initially came with his wife from the United States for what he thought would be a one-year stint.

That Jewish life has existed in Turkey for millennia is an important point for Chitrik, who says that a key message the alliance wants to convey is that Jews practicing their faith in Islamic countries should not be viewed as unusual, either by Jews or Muslims. 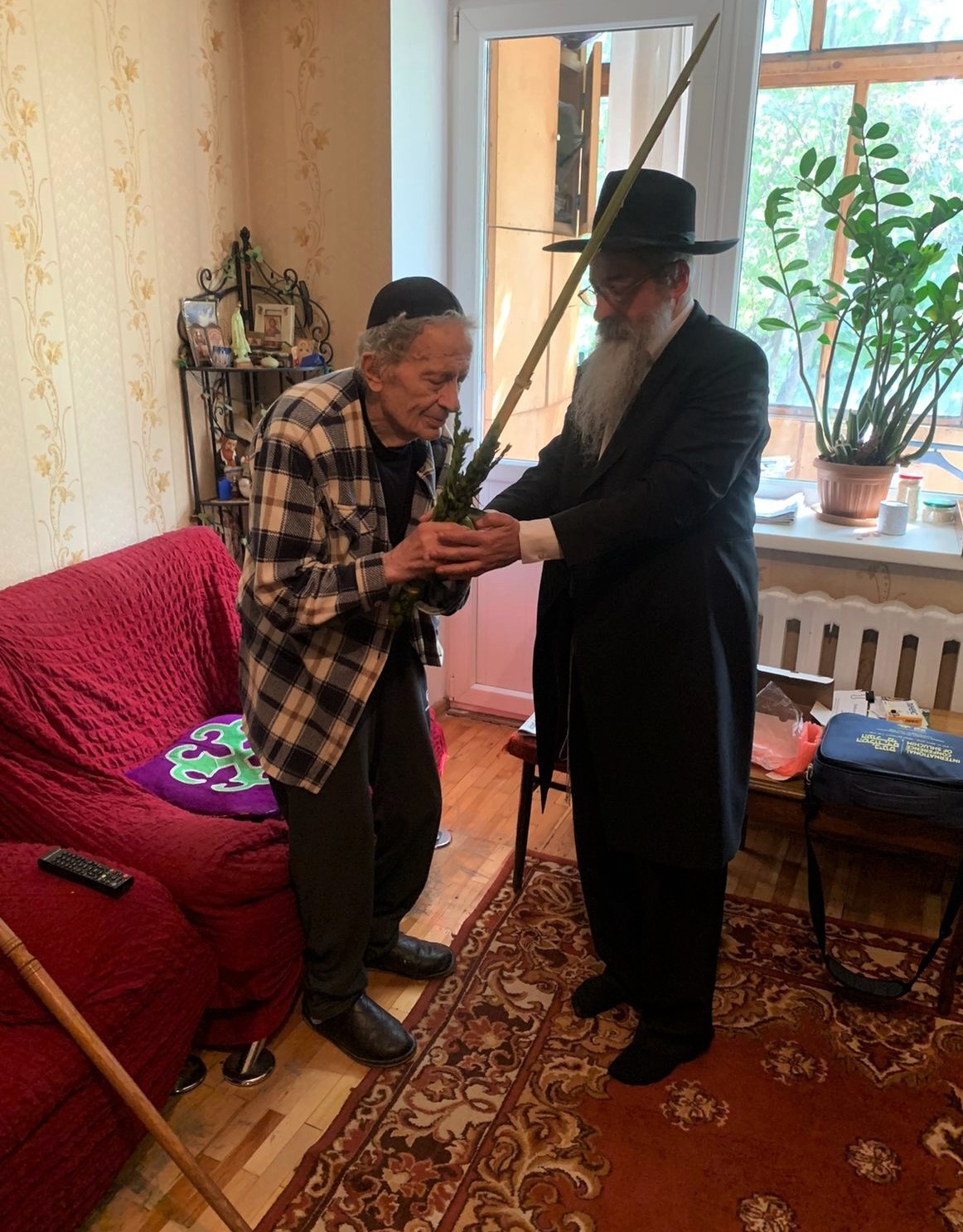 To some, a Jewish rabbi in a Muslim country “sounds funny,” he acknowledges, but “we want to publicize that it’s very normal to live a Jewish life—a full Jewish life—in Islamic countries. We want to send that message to the outside world, but we also want this message of Jewish life—continuous Jewish life—to sink into the subconscious and conscious minds of the people amongst whom we are living. It shouldn’t be peculiar to have a rabbi walking on the street in Istanbul or Azerbaijan, the United Arab Emirates or Egypt because the expression of Jewish life is OK; it’s normal.”

Chitrik says he has encountered very little anti-Semitism in his years in Turkey. The very first time was last summer when he took what he dubbed a “Turkey Jewish Road Trip” with his 10-year-old son, visiting Jewish sites in the country and tweeting about each stop. A Twitter troll with a large following made a false accusation in connection with his trip.

The important part of the story for Chitrik is that the government acted against the accuser, even though he didn’t file a complaint. The authorities stepped in anyway, questioning the man and opening “an official complaint against him.”

‘I never saw such a thing in my entire life’

Alliance member and Kazhakstan’s Chief Rabbi Yeshaya Cohen related a similar story. Within his first few years of arriving in the country, a newspaper published an anti-Semitic article. A Kazakhstan court closed it down. “One of the top priorities in Kazakhstan is tolerance and peace; if someone doesn’t respect others, he’s not respected,” Cohen tells JNS.

The Jerusalem-born Cohen came to Almaty, the largest city in Kazakhstan, in 1994. “I immediately recognized in this country something unique and special that I didn’t see in the more than 22 different countries that I had visited in my life,” he says.

“I was once invited to speak to parliament in Brussels,” he recounts. “I arrive in Brussels, and I walk from the airport to the taxi. The first five minutes I’m in Brussels, someone came up and started yelling at me. He recognized me as a Jew, and he started screaming. I never saw such a thing in my entire life in Kazakhstan,” he said, noting he walks around in public dressed like a rabbi in Kazakhstan and uses public transportation in order to meet and talk to people.

Ironically, Cohen was invited to Brussels to speak about anti-Semitism in Central Asia. 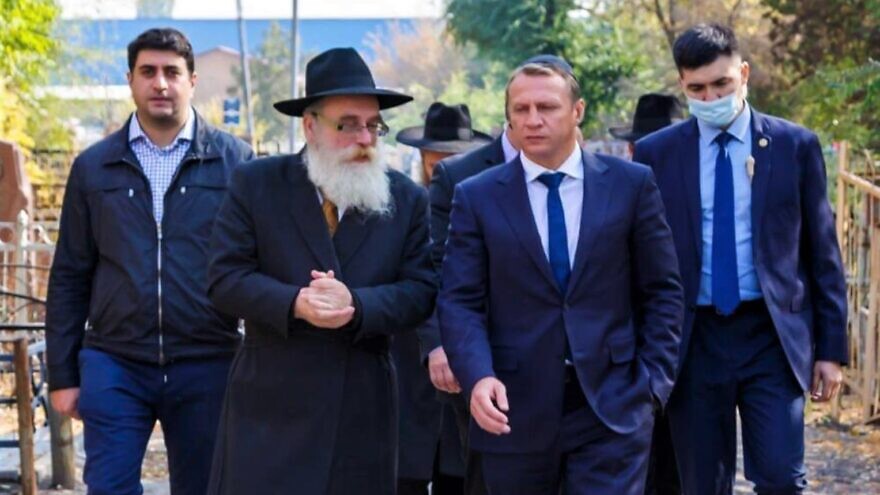 The alliance’s primary mission is to help its rabbis provide for the religious needs of their communities. One form this takes is getting religious articles to hard-to-reach places where Jews would not be expected to be found. For instance, the alliance stepped in to deliver Passover matzah to the Jews of Alexandria, Egypt, and to a solitary Jew in Libya. When the group learned that his tefillin, or phylacteries, had torn, it delivered a new pair as well. The alliance also helps the remaining five Jews in Syria. Before the Syrian Civil War, the shochet, or kosher ritual slaughterer, from Istanbul used to fly to Damascus to provide them with kosher meat.

The alliance has also been used to save Jews when called upon to do so. It helped rescue Afghanistan’s last Jew—Zebulon Simantov, who was secreted out of the country in early September.

“We were in touch with Simantov for about three years, sending him matzah, asking him if he needed anything,” said Chitrik.

When the Taliban retook the capital of Kabul, alliance rabbis quickly organized two WhatsApp groups that helped lead to getting him out, initially to neighboring Pakistan.

“In Pakistan, it was getting dangerous for him to stay. He didn’t have any legal status. So he came to Turkey,” said Chitrik, who greeted Simantov at the airport. (Simantov now says he wants to go to the United States.) 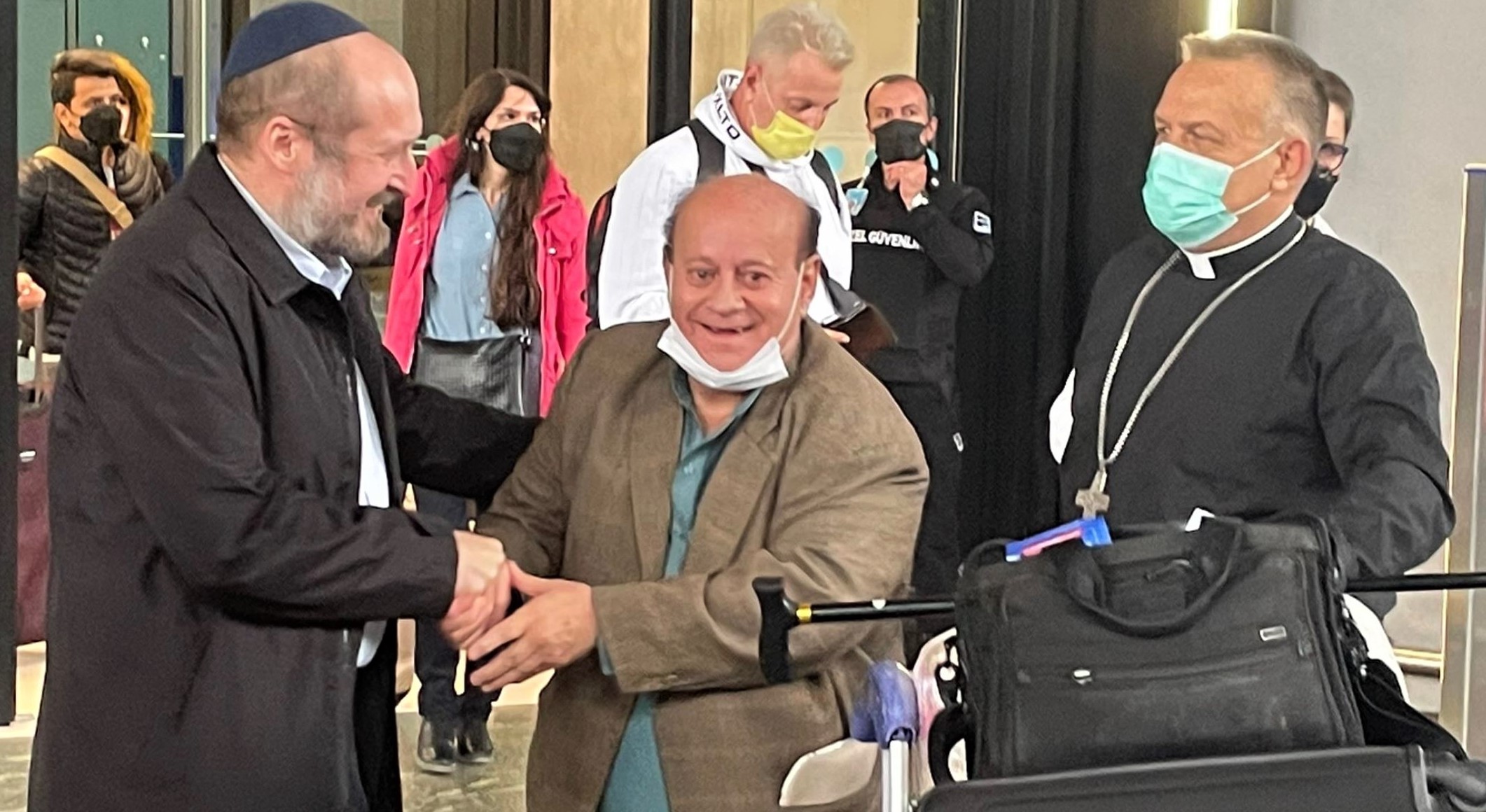 ‘We don’t feel it on the street’

In Nigeria, Rabbi Yisrael Uzan helped three Israeli filmmakers who were recently in the news, having been arrested while making a documentary on the Igbo Jews. The reason for their arrest was never made clear, though one of the filmmakers pointed to local bloggers who published false reports about them.

“Twenty-four hours a day, we were involved with the parents, with the family, with the embassy. We provided them food every day. We made a lot of connections to try and resolve the issue as soon as possible,” Uzan tells JNS. He credited the diplomatic process with eventually getting the filmmakers out.

Uzan gave the filmmakers a place to stay once they were freed, as the authorities had released them without their passports. He put them up at the Chabad school for three days until their papers were returned and they could leave the country.

There are about 1,100 Jews in Nigeria, he says—90 percent of whom are Israelis working on construction projects.

Uzan says he also works with the so-called Igbo Jews, though he is careful not to give them “false hope” since the Israeli rabbinate has ruled the Igbo are not Jewish. Still, he helps them culturally and materially in ways he can. In one large Igbo community, Uzan came in with a company that built a well. “There was no water in all the village. Now the Igbo give water to the entire village of 5,000 people,” he says. 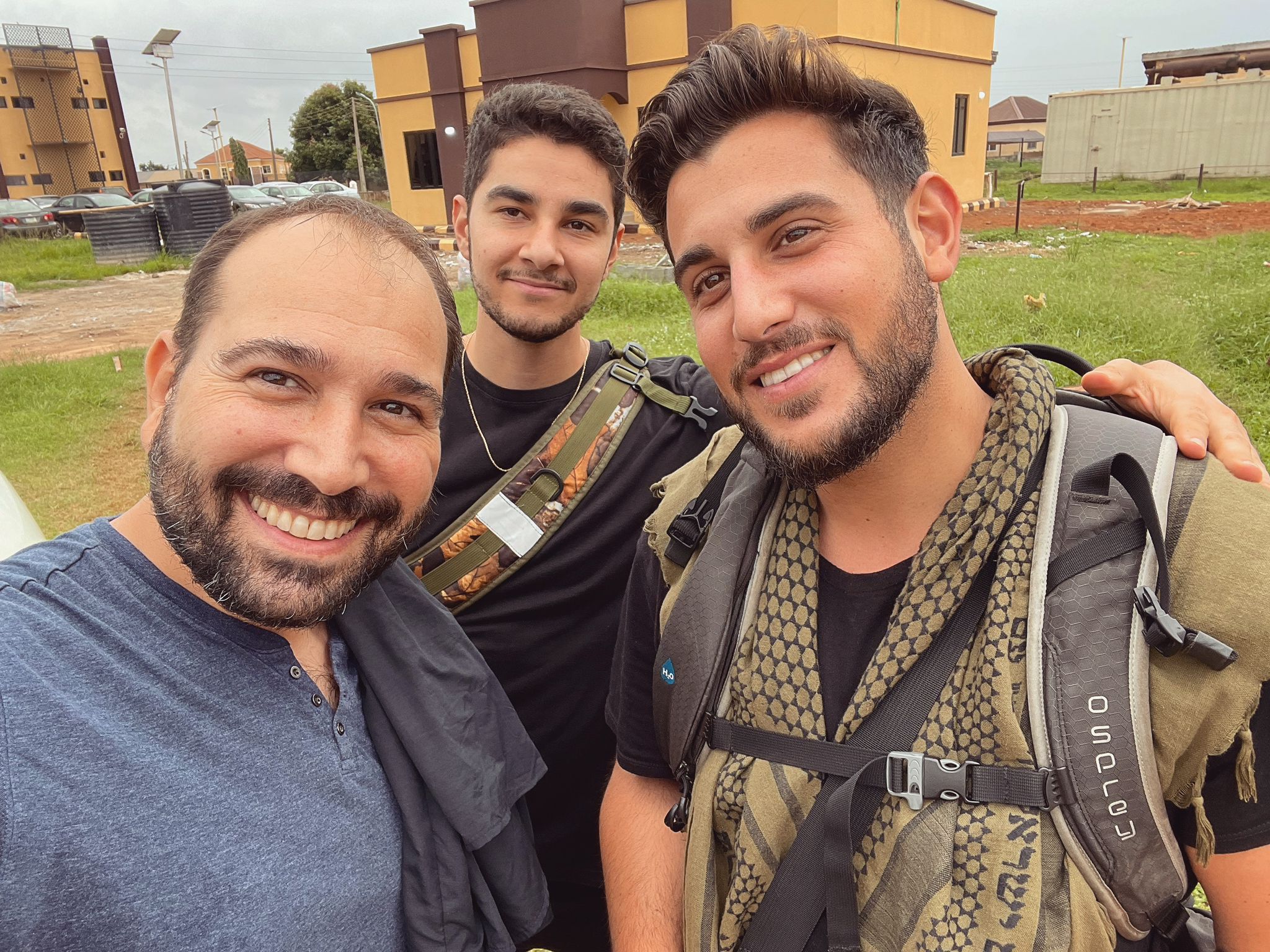 From left: David Benaym, Noam Leibman and Rudy Rochman in Nigeria. Credit: “We Were Never Lost.”

Uzan also started ChabadAid, which provides food to Nigerians. During Ramadan this spring, the group distributed 260,000 meals. Nigerians don’t know much about Jews, Israel or the Middle East conflict, according to Uzan, but he views it as part of his mission to present a positive image of Jews.

Uzan says he hasn’t encountered anti-Semitism. “We don’t feel it on the street. Nine years in Nigeria, I’ve never felt any kind.” Unlike in France, where he grew up, he says no one takes to the street when there’s a Middle East flare-up, even one involving Israel.

And he has nothing but praise for the Alliance of Rabbis in Islamic States. “First, it helps morale. It’s always good to feel that you have other rabbis facing the same challenges as you do, and if you need them, you will find them,” he says.

Second, the alliance helps in concrete ways. Last Passover, customs stopped kosher meat from coming in. The alliance sent a letter. “They see that there is this organization with rabbis in all the Muslim countries and that we are serious,” he says. “It made it much easier to release the food with that letter.”

The most important aspect of the alliance, at least for Uzan, is that it helps broadcast the news that rabbis live and work in Muslim countries. It spreads the message of coexistence. “We have to prove to the world that this is happening. This is existing. This is the most important part. People can’t believe that Jews and Muslims can live together. We want to show the world. We have so much to share together,” he emphasizes.

Chitrik noted that the Abraham Accords have definitely had a positive impact on the region and their work. “Taboos have been broken, especially for the countries involved,” he notes. “There has been a small Jewish community in the UAE for the past 20 years,” though it had been kept fairly quiet both domestically and on the international level.

He says Rabbi Levi Duchman, director of Chabad of the United Arab Emirates, who has had a presence there for seven years, “now has hundreds of thousands of Israeli tourists and even kosher restaurants.”