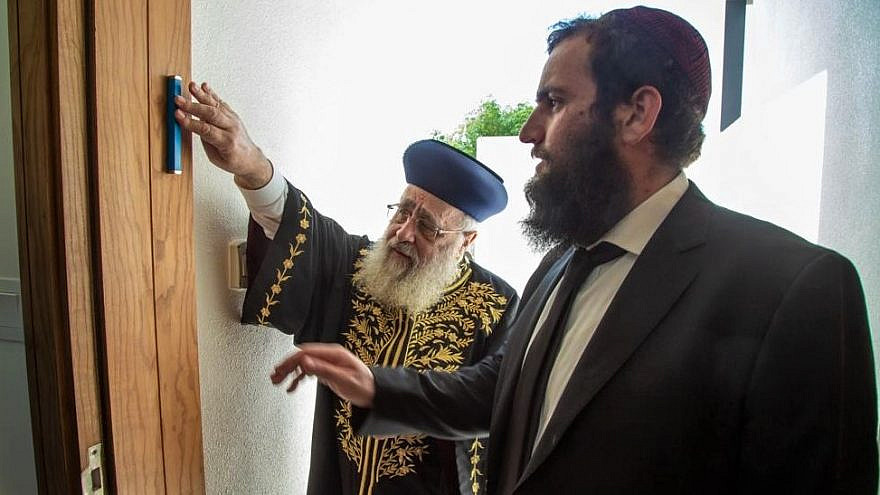 Israel's Chief Sephardi Rabbi Yitzhak Yosef affixes a mezuzah to a doorpost of the newly built Jewish school in the United Arab Emirates while on his first trip to an Arab country, as Chabad Rabbi Levi Duchman of the UAE looks on, December 2020. Credit: Courtesy of the Dubai Jewish Community Center.
Republish this article
785 WORDS
Spread the word.
Help JNS grow!
Share now:

Yosef inspected the production of kosher poultry locally, toured the new KAF kosher restaurant in the Burj Khalifa and visited community institutions, including the UAE’s Jewish Community Center and newly dedicated nursery school. He also met with Emirati officials to discuss the growing ties between the two peoples and ways to continue to promote mutual understanding between Jews and Muslims across the region.

Various other aspects of the Jewish community, including the chevra kadisha (ritual burial organization) and mikvah (ritual bath) are now being planned.

Yosef’s visit represents the first-ever of a sitting chief rabbi to an Arab country and comes following the historic Abraham Accords between the UAE and Israel.

“The visit of the chief rabbi is historic; it is a great honor for us to host him here in the Emirates,” said Duchman, who was appointed as the Chabad-Lubavitch emissary for the UAE six years ago. “We are excited to welcome him as we dedicate and break ground on several of our new institutions, which are being constructed with the swiftness and efficiency for which the UAE has become world-famous.”

“We are building a school and educational system here that will teach Jewish history and customs, as well as wider studies as we grow,” he told JNS. “I hope this will not only serve to strengthen the Jewish identity of the pupils, but also ensure the growth of the community, as Jewish families will be able to benefit more and more from the new institutions we are building.”

“If you look at the historic significance of what is happening today, it’s simply breath-taking,” continued Duchman. “The ability to welcome the official chief rabbi of the State of Israel as the rabbi of a community with the first official recognition by the United Arab Emirates is a tremendous honor and privilege. We are growing here the institutions that will serve the spiritual and physical needs of the Jewish community, and we are doing so in partnership with both the Emirati government and our partners in Israel.”

“I hope and pray that what we are achieving here will be replicated and expanded across the Emirates and the Gulf, and we will see Jewish life blossom in partnership with our Muslim neighbors,” he added. “The real peace will come between peoples, and as Jewish communities like ours flourish, I hope that the peace between the peoples will flourish, too.” 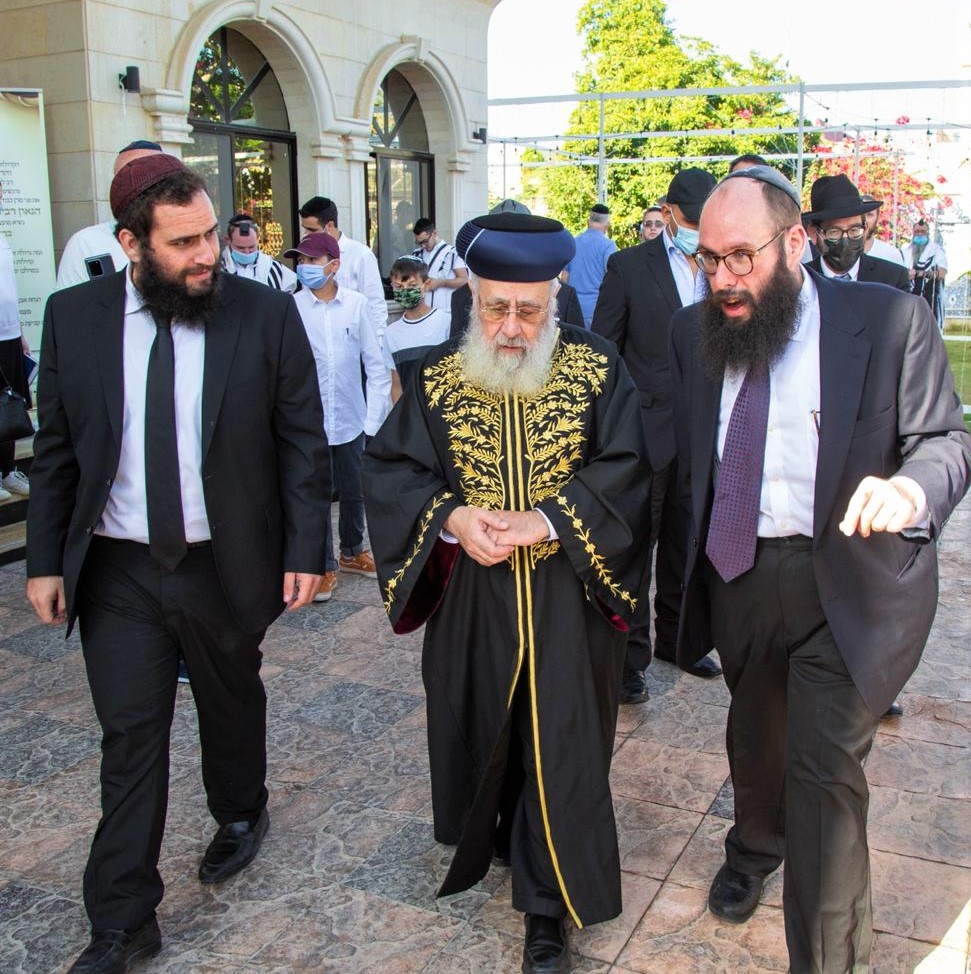 ‘Just the beginning of tourism and cooperation’

At the certification ceremony of Duchman at the Beit Tefillah Synagogue—the first and currently sole certified synagogue in Abu Dhabi—on Saturday night, the chief rabbi expressed his appreciation to the Emirati Royal Family and government for the care and well-being of the Jewish community there, and for the thriving relationship between Israel and the Emirates following the Abraham Accords.

Duchman thanked him, saying “it has been a great honor to host Chief Rabbi Yosef in the Emirates this Shabbat. We are fortunate to have been able to discuss with him the strengthening of the community and its facilities, and receive his guidance on a number of issues prevalent to Jewish traditions and customs.”

Trustee of the synagogue and community spokesperson Daniel Seal added that “this visit epitomizes the historic achievements of the past months. With gratitude to Crown Prince, His Highness Sheikh Mohammed bin Zayed, we are now able to celebrate a new era of cooperation in the region, and we are setting out to ensure that Jews who come to work or visit in Dubai, Abu Dhabi and across the Emirates will have access to Jewish institutions and services.”

“For the Jewish community in the Emirates, this a truly new age,” Seal told JNS. “The ability to welcome the chief rabbi of Israel, and in turn, receive his endorsement and support is testament to the truly warming relations between Israel and its neighbors. We are grateful to our hosts in the UAE and hope that what we build here will be a model of cooperation between the peoples of this region.”

President of the Jewish Community Center in Dubai Solly Wolf added, “Dubai has already seen the wave of Israelis visiting since the Abraham Accords, and this is just the beginning of the potential for tourism and cooperation between Israel and the Emirates. The visit of the chief rabbi I hope will go a long way to cementing the good faith and warm friendships between the Jewish and Muslim peoples of the region.”