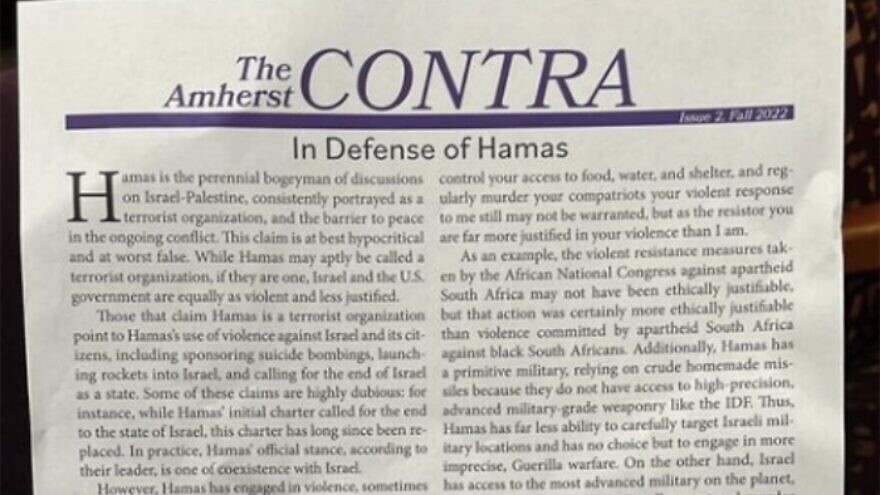 (October 25, 2022 / Jewish Journal) A student newspaper at Amherst College in Massachusetts is under fire for publishing a piece titled “In Defense of Hamas” in its second Fall 2022 issue.

The Amherst Contra piece, which does not appear to be online yet although a print version of it has gone viral on social media, calls Hamas “the perennial boogeyman of discussions on Israel-Palestine” and says that while it may very well be a terror group, “Israel and the U.S. government are equally as violent and less justified.”

The anonymous piece argues that Hamas’ violence is “a drop in a pool” compared to the U.S. and Israel, accusing the latter of murdering and torturing Palestinian civilians. It goes on to say that Hamas violence is “far more morally justified” than Israeli actions against Hamas because “violent resistance groups” are the result of “constant human rights abuses.”

The author concluded the piece by stating that discussions about Hamas are merely attempts to obfuscate Israel’s “decades of systematic apartheid and oppression.”

“Glorifying a foreign terror organization that espouses #antisemitism and hate, and is responsible for the killing of so many innocent Israelis, Americans and others, is inexcusable,” Anti-Defamation League New England tweeted. “We expect @AmherstCollege to speak out against this dangerous and misguided article.”

The Amherst Contra, an anonymous student paper at @AmherstCollege, publishes an essay defending one of the Middle East's most evil organizations.

StandWithUs CEO and co-founder Roz Rothstein said in a statement to the Journal, “Publishing a defense of an internationally recognized terrorist organization that promotes murder and targets innocent civilians in Israel, and uses its own people as human shields, is beyond appalling. Justifying this terrorism as a tactic to paint Israel as being terror-driven, when it is in fact driven by its responsibility to protect its citizens of all backgrounds, is dishonest and slanderous.

“The Israel Defense Forces (IDF) has been praised by military experts around the world for its maximum promotion of morals and ethics during and between conflicts. To attempt to state otherwise, particularly anonymously, simply showcases cowardice and bigotry. Amherst’s administration must condemn this justification of violence against Jews and Israelis of all faiths, a group of people who share an identity with members of the Amherst community, in the strongest of terms and take measures to ensure their safety on campus,” Rothstein said.

CAMERA on Campus similarly tweeted, “Attempts to whitewash the murderous actions of a terrorist org hell-bent on killing Jews are downright dangerous & an affront to Jewish students. @AmherstCollege, care to address this pro-Hamas propaganda?”

Attempts to whitewash the murderous actions of a terrorist org hell-bent on killing Jews are downright dangerous & an affront to Jewish students.@AmherstCollege, care to address this pro-Hamas propaganda? pic.twitter.com/S5JFBleXKb

Amherst College said in a statement to the Journal, “This anonymous student publication represents the opinion of its author, and it does not purport to be a statement on behalf of the college or the larger student body. Amherst prizes and defends freedom of speech and the freedom to dissent in a respectful manner. As the college’s statement on academic and expressive freedom states, ‘At times, the desire to foster a climate of mutual respect may test the college’s duty to protect and promote the unfettered exchange of ideas. On such occasions, the college’s obligations remain clear. The liberal arts cannot thrive absent the freedom to espouse and debate ideas that are unpopular, controversial, discomfiting—and even seemingly wrongheaded or offensive.’”

The Amherst Contra did not respond to the Journal’s request for comment.