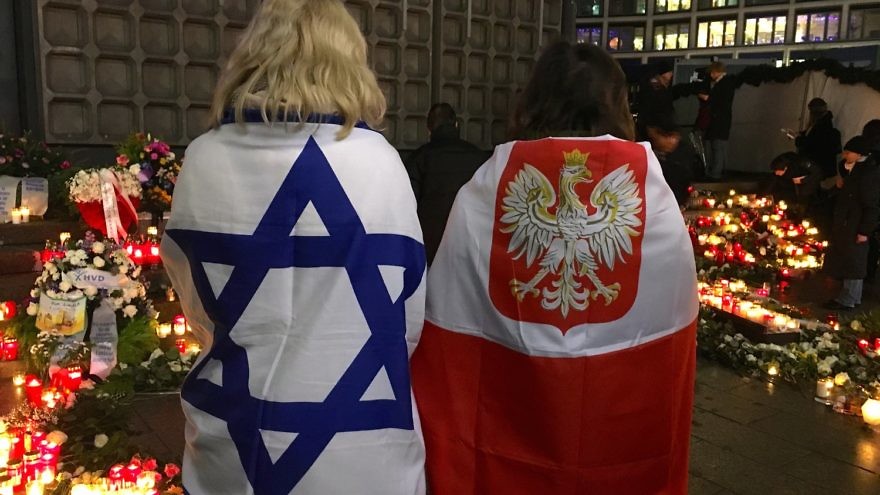 BERLIN—On Dec. 19, the bells of the Kaiser Wilhelm Memorial Church went off at 8:02 p.m., the exact time last year when a Tunisian migrant rammed a lorry into the Berlin Christmas market near the church, killing 12.

The demonstration organized by a grassroots group, “Berlin Against Islamism,” temporarily stopped its programming on Kurfurstendamm, the German capital’s ritzy boulevard. An Israeli flag draped over the equipment truck and a sign in Hebrew (among other languages) that read, “They love death, we love life,” attracted passerby Menora Vaknin, a tourist from the Israeli city of Kiryat Shmona.

“I identify with the pain,” she said as the bells rang. “We also lost a brother to a suicide attack in 2001 during the second intifada. We feel a part of it. It’s the same pain, no matter what language, no matter where it takes place.”

For Vaknin and the demonstration’s 300 participants, the cause of the pain is the same, too: radical Islam.

But according to the demonstration’s organizers as well as some Jewish community leaders, German politicians wrongly disconnect the Christmas market attack from Islamic motivations as well as the Islamist attacks that have hit Israel and other countries, leaving Germany—and particularly its Jewish population—susceptible to more terrorism.

A few hundred feet away from the protest, the names of each victim of last year’s attack were freshly inscribed along steps near the church, constituting a permanent memorial where an arc of candles illuminated their headshots, including that of slain Israeli woman Dalia Elyakim. The memorial calls “for peaceful coexistence of all humanity.” 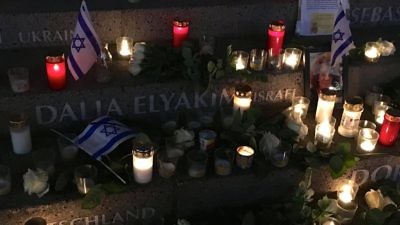 Israeli flags surround the name of Dalia Elyakim, an Israeli woman killed in the 2016 Berlin Christmas market terror attack, within a memorial to the attack’s 12 victims. Credit: Orit Arfa.

“[German politicians] were careful to say the right words and honor the victims,” Adler said. “They don’t have a defiant kind of attitude that you would find in Israel. It’s more about, ‘We have this burden to carry and we’ll carry it.’”

While the government officials spoke of mistakes that were made, with Berlin Mayor Michael Müller asking for “forgiveness” for the oversights that enabled the 2016 attack, Adler would like to see these words backed by action. He is also uncertain how the government will crack down on the aggressive anti-Israel protests throughout Germany in response to President Donald Trump’s recognition of Jerusalem as the Israeli capital.

“We had such situations in the past, and we had even worse [anti-Israel] demonstrations in recent years,” said Eldad Beck, author of the 2015 book “Germany, at Odds” and the Berlin correspondent for Israel Hayom. “Unfortunately, it did not wake up the German authorities in doing something concrete against the phenomenon. What we can say is that the official reactions to what happened were this time much faster than in recent years.”

The anti-Israel protests at Kurfurstendamm during Operation Protective Edge in 2014 were a turning point for the Jewish community in Germany and its sense of safety against anti-Semitic assaults. Muslim protesters notoriously shouted, “Jews to the gas,” as police looked on. It took several weeks for German politicians, then on summer vacation, to issue condemnations.

Every year, Shi’a and Hezbollah-backed groups hold an annual anti-Israel “Al Quds Day” demonstration in Berlin, although the recent protests, according to the American Jewish Committee’s (AJC) local office, were backed by Sunni elements with possible links to Hamas and the Muslim Brotherhood.

As the recent protests erupted, AJC released a study finding that anti-Semitic and anti-Israel attitudes and stereotypes are widespread among Arab refugees in Germany. Radicalism in the Muslim-German population is not being properly addressed, according to AJC Berlin’s director, Deidre Berger.

“Although the problem of Islamic radicalization has been constantly on the rise, particularly since outbreak of the Syrian war, there are far too few prevention and de-radicalization programs,” she told JNS. “The radicalization takes place in an increasingly, Israel-hostile environment in parts of the Muslim community, including growing numbers of Germans of Turkish origin, a worrisome development.” During a Dec. 19 demonstration outside the Kaiser Wilhelm Memorial Church in Berlin, coinciding with the anniversary of the 2016 Christmas market terror attack in that city, the woman pictured at left holds a Hebrew-language sign reading, “They love death, we love life.” At right is Antje Böttinger, a non-Jewish German who wrapped herself in an Israeli flag. Credit: Orit Arfa.

Different remedies have been suggested for preventing the recent anti-Semitic displays, from the prohibition of certain chants, slogans and symbols, to the banning of flag-burning, to the complete outlawing of such protests.

“The first thing which should be done, and it shouldn’t be too problematic, is to forbid the Al Quds demonstrations taking place every year where you see the exact same encounters you witnessed last week in Germany,” said Beck, the Israeli journalist. “German authorities should stop financing every party, organization, institution connected to these organizations.”

But for Antje Böttinger, a non-Jewish German who wrapped herself in an Israeli flag as the church bells were ringing, the remedy to both anti-Israel protests and the threat of terror is not just practical—it is about solidarity.

“An Israeli woman was one of the victims and Israel has suffered with this Islamic terror long before we did,” she said. “We are in this together.”