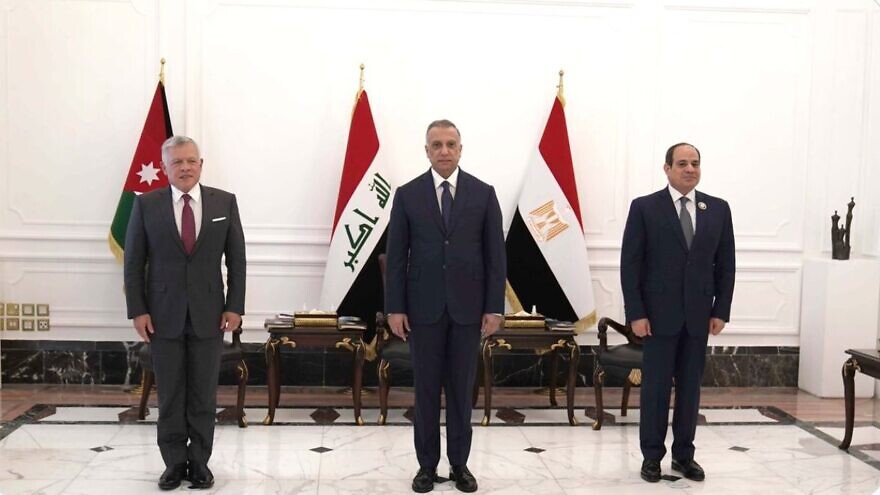 (June 28, 2021 / JNS) The leaders of Iraq, Egypt and Jordan met on Sunday in Baghdad to discuss a raft of regional issues, from the Israeli-Palestinian conflict to economic cooperation.

The summit was the fourth in a series of meetings focusing on trilateral cooperation that began in Cairo in March 2019. The three leaders last met in Amman, Jordan, last year.

Sunday’s summit marked the first visit by an Egyptian president to Iraq since ties between the two countries broke following Saddam Hussein’s invasion of Kuwait in 1990.

“The leaders stressed the need to intensify consultation and coordination between the three countries on the most important regional issues,” the Egyptian presidency said in a statement, according to Reuters.

In February, Egypt and Iraq signed 15 deals and memoranda of understanding in multiple sectors, including oil, construction and trade, after Iraq in December approved the renewal of a contract to supply Egypt with 12 million barrels of light crude for 2021, Reuters reported.

Subscribe to The JNS Daily Syndicate
by email and never miss
our top stories
Iraq plans to construct a pipeline from Basra to Jordan’s Red Sea port of Aqaba, via which it intends to export 1 million barrels of crude oil a day, according to the report.

Hafsa Halawa, a non-resident scholar with the Washington-based Middle East Institute think tank, told Reuters that the “Arab Alliance” holds potential for real economic benefit for all three parties, particularly in the realm of energy diplomacy.

Iran has become heavily entrenched in Iraq, operating proxy Shi’ite militias collectively known as the Popular Mobilization Forces (PMF). The day of the summit, the United States announced that it had attacked Iran-backed forces in Iraq and Syria in retaliation for drone strikes on U.S. forces in Iraq.

According to Halawa, “Hope remains that certain aspects of this alliance can pull Iraq slightly out of Iran’s orbit of influence,” though she cautioned against Iraq’s “rushing back into U.S. arms” and getting stuck between Washington and Tehran.

The U.S. State Department welcomed the trilateral summit, which it said would help “strengthen economic ties and security cooperation between Egypt, Iraq and Jordan.” The United States has long urged an improvement of relations between Iraq and other Arab states to counter Iranian influence in the region.