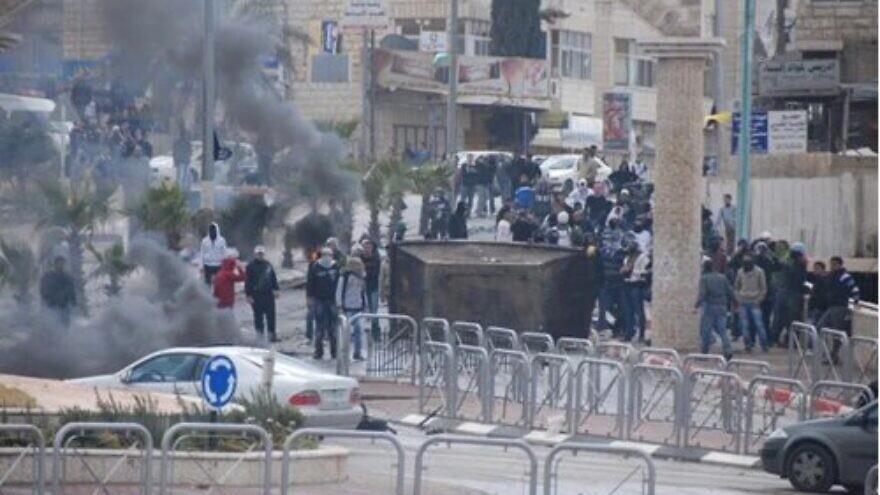 (October 13, 2022 / JNS) Violent disturbances and rioting erupted overnight Thursday in eastern Jerusalem. Several assaults by Palestinians on Jewish residents and security personnel were recorded, in a significant deterioration of the situation.

Riots took place in Jerusalem neighborhoods that include Ras al-Amud in the city’s southeast; Wadi Joz, north of the Old City; and Beit Hanina in the northeast, where rioters attacked a car containing a Jewish family that included babies. The vehicle barely escaped the attack by the rock-throwing mob.

Throughout the eastern section of the city, Palestinians fired fireworks at buildings where Jews live, threw Molotov cocktails at vehicles, set trash cans on fire and assaulted security personnel.

The riots continued into the night. Police and Border Police units were deployed to several friction points. The police responded with riot dispersal means and engaged with mobs hurling rocks and firebombs and launching fireworks.

Following a situation assessment, the Border Police placed 10 of its reserve companies on standby.

An Israeli bus also came under rock attack near Kiryat Arba, in the Hebron area. An Israel Defense Forces unit shot one of the rock-throwers, wounding him.

At the end of the meeting, Gantz stressed the need to increase offensive and defensive measures as well as direct messaging to the Palestinian population and actions to thwart incitement on social media networks.