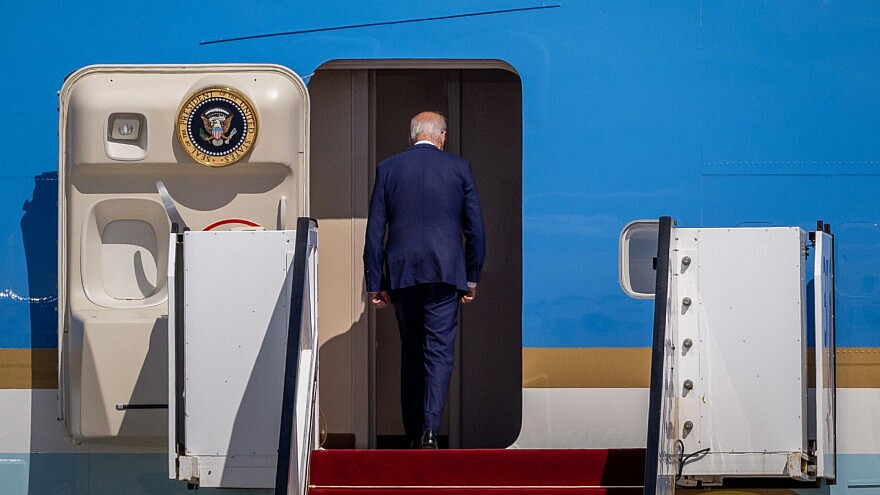 (August 1, 2022 / JNS) Despite repeated refrains by Biden administration officials that negotiations to revive the Iran nuclear deal cannot go on indefinitely, which the U.S. president himself reiterated during the Israel leg of his Middle East trip in mid-July, Washington has refused to set a deadline for ending talks even though they appear to be on life support and are possibly unsalvagable given Tehran’s recent claims that it could easily build a bomb.

Richard Goldberg, a senior adviser at the Washington, D.C.-based Foundation for Defense of Democracies (FDD), told JNS that the fact the Biden administration continues to make such statements “raises serious doubts as to whether they will ever walk away from the agreement, and if the policy is merely to continue indefinitely to show a willingness to make a deal.”

Secretary of State Antony Blinken as far back as June 2021 said that there would come a point at which it would “be very hard” to return to the Joint Comprehensive Plan of Action (JCPOA), the 2015 nuclear agreement signed between Iran and world powers.

“When the administration was pushed to explain what it meant by such remarks, it would clarify that there’s a point at which the non-proliferation value of the JCPOA is so diminished that it would no longer be in U.S. interests to return to it,” FDD’s Goldberg explained.

“It would appear that Iran has already passed the threshold of diminished value of even the narrow, short-term restrictions that were contained in the JCPOA,” he said. “Iran at this point has been allowed by the Biden administration over the last year-and-a-half to advance its nuclear program so far that the capabilities and knowledge it has acquired to let it very quickly move to weapons-grade uranium and potentially break out [to a nuclear bomb] are no longer something that can be prevented by the JCPOA.”

Goldberg said that some ostensible supporters of the JCPOA are now opposed to the terms that are on the negotiating table in Vienna.

“There is a shrinking circle of committed ideologues to the concept of the JCPOA, whereas even those who once saw value in the JCPOA now understand that there’s no positive non-proliferation value at this point in returning to the old agreement,” he said.

Goldberg interprets the U.S. administration’s continued comments that time is running out as a tacit admission that Iran will eventually become a nuclear threshold state, and that a change in policy will only take place if the Islamic Republic engages in “active weaponization.”

“There are elements of weaponization that are already underway,” Goldberg said. “This is the fallacy. If you are waiting for some sort of intelligence to show you that they’re building a bomb, you may be too late because what they’ve done is effectively created the assembly line for the bomb and they’re perfecting the assembly line without producing any intelligence that shows you they’re putting the car together.”

Then there is Iran’s decision in June to pull the International Atomic Energy Agency’s (IAEA) cameras from several nuclear sites. IAEA Director General Rafael Mariano Grossi said at the time that if the monitoring was not restored in three to four weeks then “this would be a fatal blow” to the nuclear deal.

“There are things going on potentially right now that cannot be verified in the future,” the FDD’s Goldberg said.

By contrast, Eyal Zisser, vice rector of Tel Aviv University and a lecturer in its Middle East history department, suggests that a renewed nuclear deal still has value and that no end-date for forging one should be set.

“The whole idea is to prevent Iran from becoming nuclear. As long as the West believes that it can delay the process through negotiations, then why put a deadline,” he told JNS. “Also, it’s in Iran’s interest to reach a deal in order to lift sanctions.”

Zisser views the U.S. administration’s statements about a shrinking timeframe for an accord as a means to pressure Iran to reach an agreement.

Similarly, he said that Iranian claims that they are on the threshold of building a bomb—notably, an Islamic Revolutionary Guard Corps-linked social media channel on Saturday threatened to reduce New York City to “hellish ruins”—are geared towards pressuring the U.S.

Zisser conceded that a new deal “doesn’t mean that the Iranians will give up any of their achievements, any of the [nuclear] progress that they’ve made.”

But that might be enough for Washington, he said, as Iran is not necessarily the priority for the U.S., as it is for the Israelis.

“The Americans don’t want to be challenged by Iran, and a nuclear-armed Iran would be a challenge. It’s all about delaying it to the next president and the next one and the one that comes after,” he said.

On the other hand, the FDD’s Goldberg believes that a revived nuclear deal is as dangerous for Washington as it is for Jerusalem, noting that the Iranians have been working towards building intercontinental ballistic missiles capable of hitting the U.S.

Resuscitating the accord, he said, “would fund massive expansions of the Iranians’s nuclear weapons-related missile programs.”