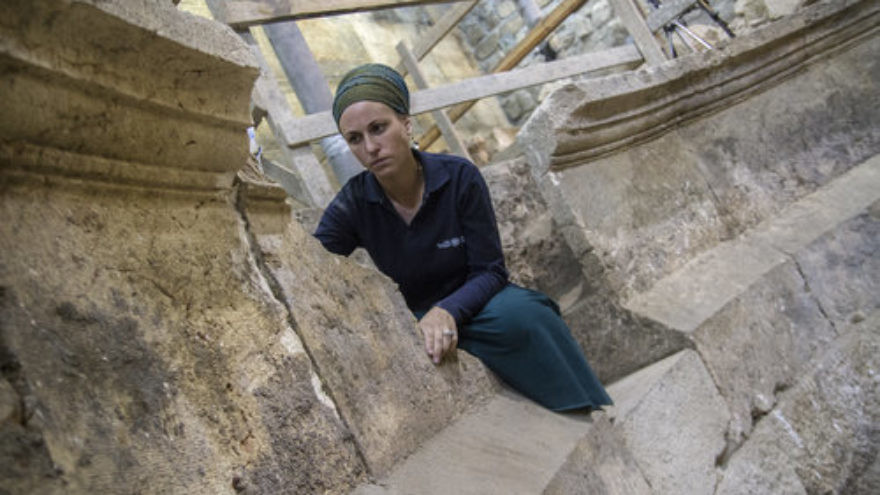 (October 20, 2017 / JNS) Israeli archaeologists this week unveiled the results of large-scale excavations that lend unprecedented insight into the transformation of Jerusalem around the time of its destruction during the Second Temple period more than 2,000 years ago.

The discoveries—including massive portions of the Western Wall unseen for 1,700 years and an ancient Roman theater—were made in excavations conducted during the past two years in Jerusalem’s Old City. The findings were disclosed at a press conference held by the Israel Antiquity Authority (IAA) beneath Wilson’s Arch in the Western Wall Tunnels.

The newly revealed eight stone courses of the Western Wall had been hidden beneath 26 feet of earth and were perfectly preserved after being excavated. The Roman theater contains approximately 200 seats and, according to archaeologists, required a “great deal” of investment in its construction.

One of the most significant aspects of the discoveries is that they exhibit “the cultural change that Jerusalem underwent around the Second Temple period, when Jerusalem was a Jewish city with Jewish culture, which after the destruction turned into a Roman city with Roman culture,” IAA archaeologist Tehillah Lieberman told JNS.org.

“The Romans needed different buildings,” she said. “They had different structures with different uses…the focus and the center of the city had to change, and that’s what we see in Wilson’s Arch. We see how the street from the Second Temple was dismantled and in its place a Roman theater-like structure was built facing its back to Temple Mount, and this tells us the story of what happened to Jerusalem after the destruction.”

Israel Hasson, director-general of the IAA, said the findings “enhance the importance of expanding the archaeological excavations in this region” in order to unveil ancient Jerusalem.

The excavation project was initiated with the intention of accurately dating Wilson’s Arch, which is believed to be the only structure from the Temple Mount compound of the Second Temple period that remains intact today.

The arch, which stands above the Western Wall’s foundations, is named after 19th-century explorer Charles William Wilson, who identified it in 1864. It is constructed from enormous stones, and is the only remaining arch from a series of similar arches that formed a large bridge leading up to the Temple Mount compound from the west.

“When we started the excavations, there were three opinions regarding the age of Wilson’s Arch,” Lieberman said.

According to Lieberman, all other known structures dating back to the Second Temple period, including the Western Wall, have signs of destruction. On the other hand, Wilson’s Arch “is complete from its foundation all the way to the top of the arch and its connection to the Western Wall,” she said.

To verify that the arch dates to the Second Temple period, archaeologists sent samples from inside the arch and its connecting pillar for carbon dating tests.

“We’re still waiting for the official results,” said Lieberman. “The excavation isn’t finished yet, and I hope that as it goes on, we’ll be able to give a more accurate date.”

As the IAA team awaits the results, Lieberman said she believes the arch “has been standing in its place since the Second Temple period.” She bases her assessment on how Wilson’s Arch relates to the other architectural elements at the excavation site.

“On the supporting pillar of the arch, there are five openings that look like five little rooms,” said Lieberman. “The theater-like structure [that was uncovered in the dig] blocks the entrance to two of them.”

This, she said, “means [the theater] definitely has to post-date the pillar of the arch and the arch itself.”

Archaeologists also found plaster from Jewish ritual baths “on the other side of that same pillar…which means it has to be from some time between the 1st and 2nd century,” said Lieberman.

Lieberman believes the future holds discoveries that could date even earlier than “everything that has been exposed up until now,” speculating that artifacts from the First Temple period could be found.

“Time after time,” said Rabbi Shmuel Rabinowitz, rabbi of the Western Wall, “the amazing archaeological findings allow our generation to actually touch the ancient history of our people and Jewish heritage, and its deep connection to Jerusalem.”