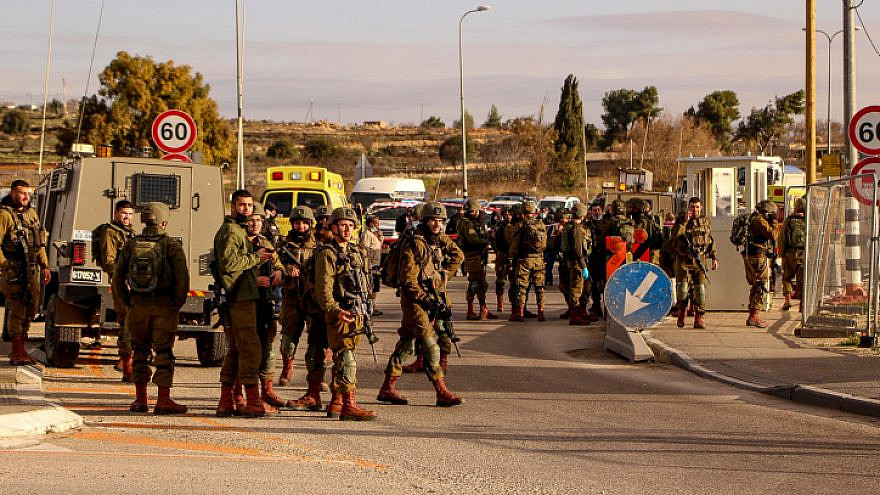 Israeli security forces near the scene of the attempted stabbing attack in the Gush Etzion Junction on Jan. 31, 2021. Photo by Gershon Elinson/Flash90.
Spread the word.
Help JNS grow!
Share now:

(January 31, 2021 / JNS) A Palestinian terrorist was shot and killed on Sunday morning during an attempted stabbing attack at the Gush Etzion junction in Judea and Samaria, the Israeli military reported.

“A terrorist armed with [an improvised spear] reached the Gush Etzion Junction and tried to stab Israel Defense Forces soldiers operating in the area. One of the soldiers responded by shooting and neutralizing the terrorist. There were no casualties to our forces,” said the IDF in a statement.

“I was standing at the northern hitchhiking station at the Gush Etzion junction, to protect the civilians there. I saw a suspect walking on the road who began advancing quickly towards me and civilians at the location. I saw that he had drawn a knife, so I shot and neutralized [him],” said Corporal E. of the IDF’s Nahshon Battalion. “I have been deployed here with my comrades in the battalion for about a month. We remain alert at all times to avoid cases like this. We will continue to protect the residents of Gush Etzion and our home[land].”

Security camera footage shows a man with a hoodie approaching, drawing a bladed weapon and running towards the bus stop, and a soldier then firing at him.

The Gush Etzion Junction has been the site of numerous terrorist attacks, the most recent of which occurred on Jan. 5, when a terrorist wielding a meat cleaver was shot dead by a civilian on the scene.