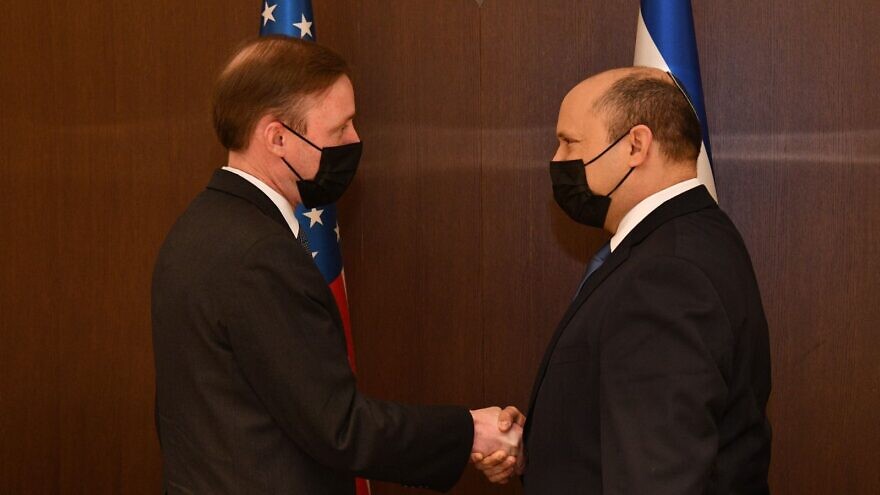 The two discussed a variety of subjects, among them the ongoing negotiations in Vienna between Iran and the other signatories to the 2015 Joint Comprehensive Plan of Action nuclear agreement, according to a statement from Bennett’s office.

Israeli Ambassador to the U.S. Mike Herzog and U.S. Ambassador to Israel Thomas Nides, along with other senior officials, also attended the meeting.

Prior to his meeting with Bennett, Sullivan held a working meeting with his Israeli counterpart, Eyal Hulata.

“These days are pretty important,” said Bennett at the start of the meeting. “What happens in Vienna has profound ramifications for the stability of the Middle East and the security of Israel for the upcoming years. And that’s why it’s such a timely meeting.”

The relationship between the two countries is “as strong as ever,” said Bennett, adding that it was for this reason the two sides could talk “openly and candidly about all the shared challenges that we’re facing.”

Sullivan said that U.S. President Joe Biden had requested that he visit Israel because the two countries were at a “critical juncture … on a major set of security issues.”

“It’s important that we sit together and develop a common strategy, a common outlook, and find a way forward that fundamentally secures your country’s interests and mine,” said Sullivan.

Bennett concluded his opening statement with a holiday message.

“I want to take this opportunity to wish you and your family, to wish President Biden and the first lady, and to wish the great people of the United States a merry Christmas and a Happy New Year. It’s going to be a good day,” he said.