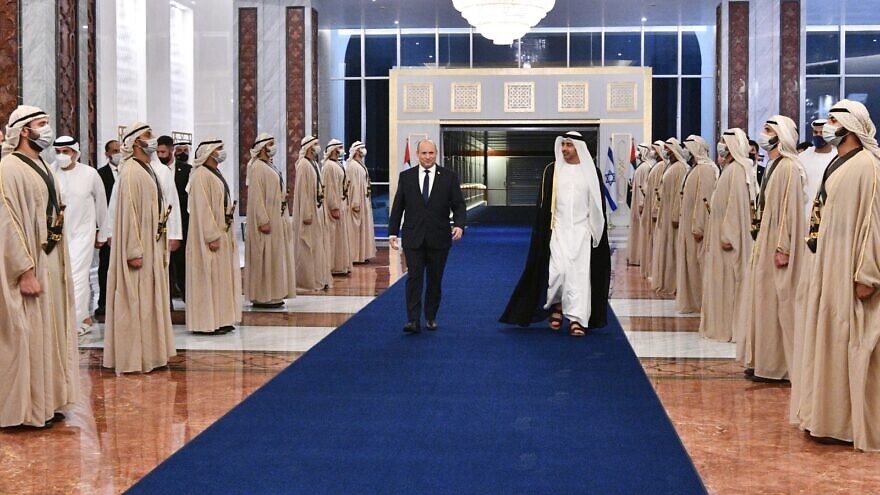 (December 13, 2021 / JNS) Israeli Prime Minister Naftali Bennett met Crown Prince Sheikh Mohammed bin Zayed at his private palace in Abu Dhabi on Monday in the first official visit by an Israeli premier to the United Arab Emirates. The growing economic ties between their two countries were on the official agenda, though analysts tell JNS that behind the scenes the key topic of Iran was likely front and center.

The optics couldn’t have been better for Bennett. Upon arrival on Sunday, he was greeted by an honor guard and UAE Foreign Minister Abdullah bin Zayed Al Nahyan. Israeli and Emirati flags stood in long rows on either side. Bennett called it a splendid welcome.

Speaking of the Abraham Accords—the normalization agreement signed between Israel and several Muslim countries, the first of which was the UAE—Bennett told the Emirates News Agency (WAM) that they established a “new, deep and solid structure for diplomatic, economic and cultural relations.”

Bennett’s meetings on Monday centered on economy and trade. He met separately with the UAE’s minister of industry and advanced technology, its minister of transportation, and the managing director and CEO of the Mubadala Investment Company.

“The volume of mutual trade has expedited within a few months with limitless future opportunities to develop it. Israel, like the UAE, is a regional hub for trade,” Bennett told WAM. “Our cooperation provides unprecedented economic opportunities not only for us, but for more countries, which is another element for enhancing stability and prosperity in this region.”

While economic benefits remain crucial for both countries, unspoken publicly was the issue of Iran, analysts told JNS.

“The timing is interesting because of the ongoing negotiations in Vienna with Iran. And this is, I think, something that was at least in the background of the talks that Bennett is holding right now in Abu Dhabi, perhaps the main issue,” Yoel Guzansky, a senior research fellow at the Institute for National Security Studies (INSS), told JNS.

“The economy is doing great,” he said. “Other issues need to be addressed, and I think Iran is the No. 1 issue.”

Eyal Zisser, the vice rector of Tel Aviv University and a professor of Middle Eastern studies, told JNS that Israel and the UAE most certainly discussed America’s intention to draw down from the region and the Iranian threat. “Clearly, the Emirates is not strong enough to fight alongside Israel against Iran. So I doubt very much whether we’re talking about joint plans. It’s mainly diplomatic pressure and sharing intelligence, coordinating efforts—not more than that.”

Guzansky said the UAE believes that it will be hit if the Iran situation heats up given its geographic proximity to the Islamic Republic, noting “Israel can help with their security in many ways.”

Both analysts agree that the UAE is “dancing a very complicated dance,” in Guzansky’s words, as it must balance between opposing forces.

The “photo ops” now coming out of Abu Dhabi send “a strong signal, a strong message,” said Guzansky. At the same time, the UAE is eager not to antagonize Iran. “It’s saying we’re not only with Israel. We are trying to be both with Israel and Iran,” he added.

Zisser said “the Emirates do understand that the United States is leaving, or at least decreasing, its level of presence [in the region], so it sends messages to Tehran: ‘We are not enemies of Iran; we also want good relations with Iran.’ There is always the question of how successful will they be in maintaining the balance between the desire to promote relations with Israel and the desire to have normal relations with Iran?”

Guzansky told JNS he thinks a new Iran deal will be struck. “The UAE is trying to appease Iran and lower the flames in the Gulf not out of love of Iran, but out of fear—out of the assumption; the right assumption, I think—that Iran is going to get stronger after an agreement will be signed.”

The UAE approach is not “bulletproof,” he said. “They will pay a price for it. You will hear criticism from the Iranians now after the meeting from Turkey and Qatar and the Palestinians.” But he added that the Emirates will continue a policy of engaging all sides “because they feel they have no choice. This is the only game in town where they cannot avoid Iran.”

Zisser noted that while the UAE walks a tightrope, that doesn’t mean its agreement with Israel isn’t genuine. Unlike the agreements with Egypt and Jordan, “with the Emirates, it’s different,” he said. “It’s a real peace, a warm peace. It’s people-to-people, which is missing when we speak about Egypt and Jordan.”