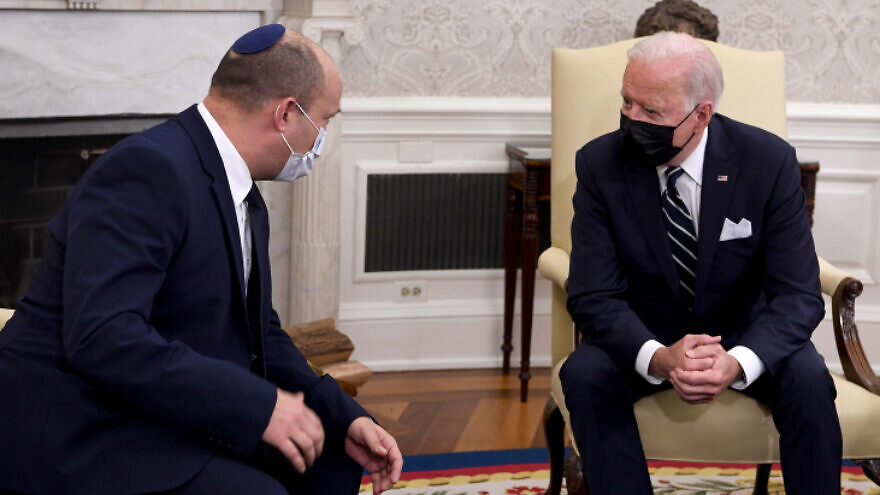 (June 13, 2022 / JNS) U.S. President Joe Biden is slated to visit Israel and the Palestinian Authority on July 14-15 before heading to Saudi Arabia for a prospective multilateral summit intended to gather the leaders of numerous regional countries, U.S. officials said on Sunday. The White House will formally announce the details of Biden’s Mideast trip later this week, they added.

The president had previously been expected in the Middle East this month, but the trip was delayed. Following the postponement, speculation arose that the cause was the instability of Israel’s coalition government, which is teetering on the brink of collapse. However, U.S. Ambassador to Israel Thomas Nides told the Jewish Insider on June 6 that the delay was due to scheduling constraints.

“He was going to come in June, but the trip got too long, and everything was getting crunched in,” said Nides, according to the report. Biden was planning to combine his Middle East trip with the G7 meeting in Germany on June 26-28 and the NATO summit in Spain on June 29-30, he added.

However, Alan Baker, director of the Institute for Contemporary Affairs at the Jerusalem Center for Public Affairs and former Israeli ambassador to Canada, told JNS that it wasn’t clear why Biden is coming at all, given the fragility of Israel’s government.

“I think nothing good will come from this visit and I cannot understand why Biden is coming given the internal political problems the Israeli government is facing and in view of ongoing pressures by the Palestinians,” he said.

“Biden will make statements condemning Israeli settlement activity and in support of some type of Palestinian consular presence in Jerusalem, which will annoy the Israelis very much. He will also run to meet Abbas,” he added.

The Palestinian leader on Saturday called on the international community to stop Israel’s “criminal and occupying practices of ethnic cleansing and racial discrimination” during a meeting in Ramallah with a U.S. delegation headed by Assistant Secretary of State for Near Eastern Affairs Barbara Leaf.

Abbas also advocated for the Palestine Liberation Organization to be removed from the U.S. list of foreign terrorist groups, and requested that the PLO’s office in Washington–which was shuttered by the Trump administration–be reopened, according to a statement from his office. He slammed purported “Israeli escalations” against Islamic and Christian holy sites and the supposed expulsion of Palestinians in eastern Jerusalem and settlement activity.

The meeting was a part of an effort by the White House to enhance diplomatic ties with the P.A., and comes after the State Department last week re-established a formal line of communication with Ramallah by rebranding the Palestinian Affairs Unit operating within and until now under the auspices of the U.S. Embassy to Israel as the “U.S. Office of Palestinian Affairs in Jerusalem.” Its head, George Noll, will report directly to Washington and not through Ambassador Nides, reversing a change made by Nides’ predecessor David Friedman, according to an Axios report.

The move apparently came in lieu of fulfilling then-U.S. presidential candidate Biden’s campaign pledge to reopen a dedicated mission to the Palestinians in Jerusalem that was similarly abandoned by former U.S. President Donald Trump. The Israeli government strongly opposes this prospect, claiming it undermines Israeli sovereignty over the nation’s capital.

Considering the P.A.’s posturing and the current makeup of Israel’s government, Baker does not believe that a diplomatic breakthrough is on the horizon, and therefore questions why the White House would seemingly double down on the Palestinian issue, especially in the context of recent developments regarding Iran.

“The Israelis will stress the Iranian nuclear threat, and on this issue there is consensus within the coalition, which is not the case on the peace process with the Palestinians,” said Baker. “So, the basic common denominator is Iran, and the Israelis have been critical of the Biden administration’s push to placate Tehran at all costs.”

Indeed, the mullahs are seemingly advancing full throttle with their nuclear program, with Prime Minister Bennett warning this weekend that the Islamic Republic was “dangerously close” to obtaining a bomb unless the West stops Tehran in its tracks.

The Iranian issue is also likely to top the agenda when Biden heads on from Israel to Saudi Arabia, where the U.S. administration is attempting to organize a confab that could bring together the leaders of Egypt, Jordan, Kuwait, Iraq, Oman, Qatar and the United Arab Emirates, as reported by Axios.

There have also been rumors swirling that the White House is trying to broker a deal that would see the Saudis take additional steps towards normalizing relations with the Jewish state.

Professor Chuck Freilich, a former deputy national security adviser in Israel who has taught political science at Harvard, Columbia, NYU and Tel Aviv University, told JNS that Biden’s visit was unlikely to yield progress on either the Palestinian or Iranian issues.

“I don’t think we will see a lot of agreement between the Americans and Israelis on either the Palestinian or Iranian issues, but the two sides will put a good face on and try to minimize their differences,” said Freilich.

“That said, Iran seems not to be in a hurry to forge a nuclear deal, if they are interested at all, so this could act as a basis for the various parties to move forward. The U.S. will try to apply more pressure on the Iranians to bring them back into compliance with the [2015 Joint Comprehensive Plan of Action], and that is the point” at which divergences between all the stakeholders could emerge, he added.

Accordingly, at the planned summit Biden will by all accounts try to find common ground with, or at the very least temper the concerns of, regional partners as it relates to Iran’s nuclear progress and ambitions.

Meanwhile, Biden is expected to hold a tête-à-tête with Saudi Crown Prince Mohammad bin Salman, whom the U.S. president previously referred to as a “pariah” due to Riyadh’s alleged role in the 2018 killing in its consulate in Istanbul of Washington Post journalist Jamal Khashoggi.

“It happens to be a larger meeting taking place in Saudi Arabia. That’s the reason I’m going. And it has to do with national security for them, for Israelis…. It has to do with much larger issues than having to do with the energy piece,” said Biden on Sunday, in reference to criticism that his engagement of the Saudis constitutes an about-face and is being driven by a desire to curb skyrocketing oil prices.